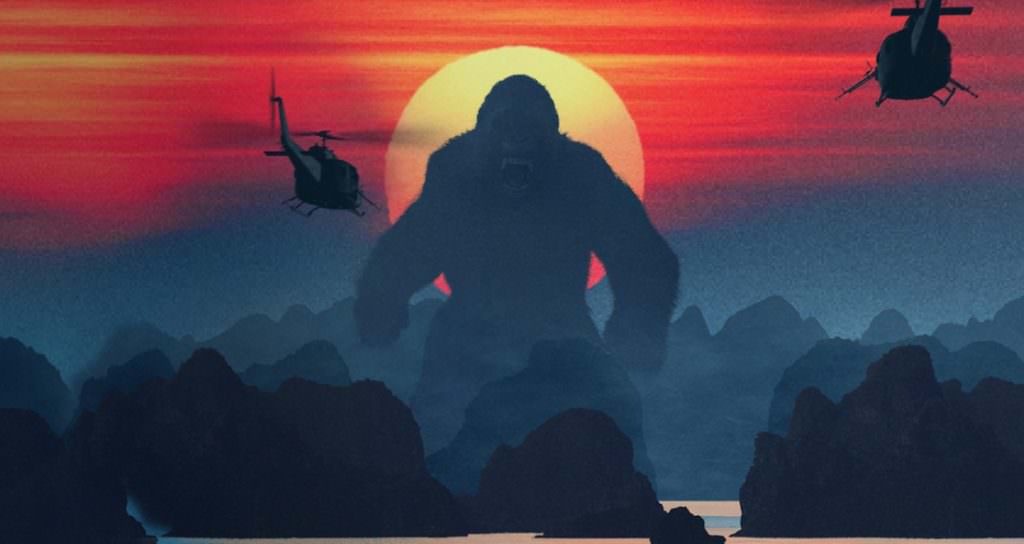 Yesterday we discussed how Kong: Skull Island will introduce the largest Kong ever put on screen. Standing more than 100 feet tall, this Kong is more than four times the size of the incarnation we saw in Peter Jackson’s 2005 film, and rules as a god over an island with more beasts and monsters than we’ve seen in any previous Kong film. Skull Island follows a team of explorers, led by Colonel James Conrad (Tom Hiddleston) as they venture onto the primordial island to find a missing man and a mythical serum.

Warner Bros. is ramping up the promotional material as we near the film’s March 10 release, and everything we see gives us hope that this could be the most exciting Kong film of all time. The first clip showcases Kong’s size as Conrad, Lieutenant Colonel Packard (Samuel L. Jackson) and the rest of the crew head straight for him in choppers.  Kong, rising against the backdrop of a huge setting sun, shows us his full, majestic, terrifying size. It’s an image that was designed to feel iconic, and it works.

In the second clip, the crew comes across a massive graveyard, which we’re told represents the final resting place of Kong’s parents. Here, John C. Reilly’s Marlow warns the crew that passing over this site is a major “no no,” but Lieutenant Colonel Packard (Samuel L. Jackson) has a missing man he needs to find, at all costs.

In the final clip, Packard shows that the work they’ve been doing on Kong (namely shooting at him) seems to be paying off—a massive bloody handprint proves he can be hurt. But it also suggests he now views them as invaders and enemies, probably a negative considering he’s 100 feet tall.