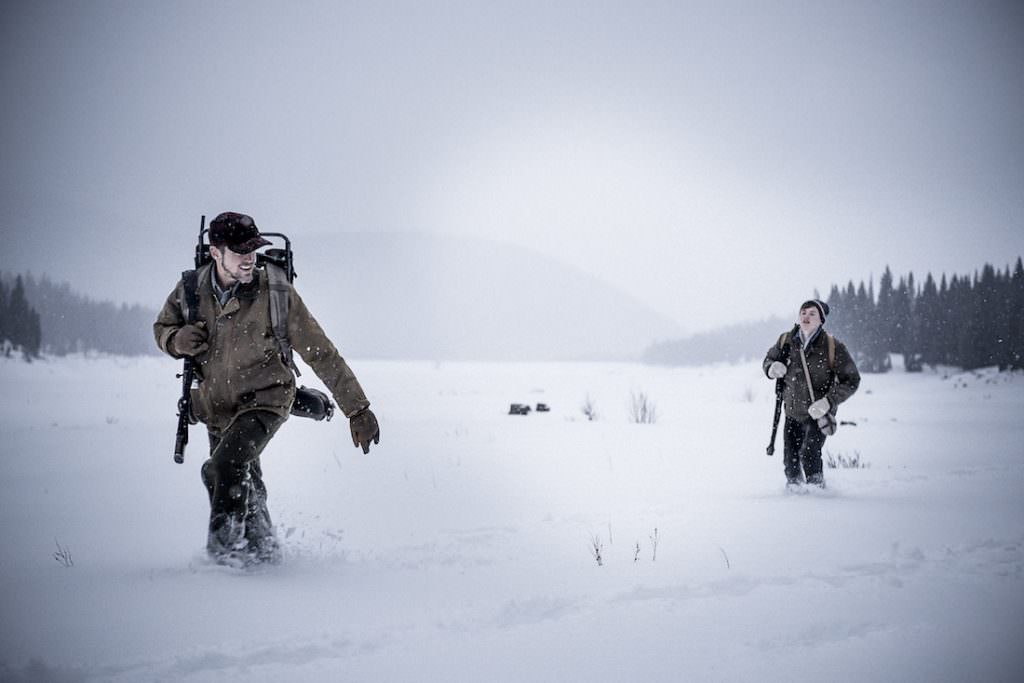 Sundance selection Walking Out pits Matt Bomer (White Collar) and Josh Wiggins (Max) against the snowy Montana wilderness on a hunting expedition gone wrong. In order to capture the survival story, cinematographer Todd McMullen had to conquer the elements in real life. There were no soundstages or CGI to paint the beautiful and unforgiving landscape. McMullen and the film crew shot on location in the Montana mountains in January weather. With no way to manipulate the daylight, they had eight hours or less each day to capture the action in the frigid locale.

We spoke with McMullen about battling the sun and snow, capturing the great outdoors on camera, the shots he’s most proud of and more.

In a nutshell, it’s a coming of age story where one of our characters goes to visit his divorced father. He comes in from Texas to Montana. His dad wants to get him on a big game hunt for elk. They haven’t spent much time together, so they start the journey up into the mountains to hunt this elk and get to be reacquainted with each other and try to find some common ground.  They run into some obstacles where the son has to grow up and remember what his father taught him on the climb up and use that to get them both down the mountain safely.

How did you get involved with the film?

I had known one of the directors, Alex Smith, for a number of years. His wife, Dana [Wheeler-Nicholson], was in a show I was shooting, Friday Night Lights. We got to know each other and we always wanted to work together but everything was always out of sync. Finally he had Walking Out come up. He sent over the script, I read it and I completely resonated with it because I had done a lot of hunting with my dad growing up and had lot of those same experiences: fear, anxiety and reward. I immediately related with it.

What are your memories of hunting with your family?

I would deer hunt up in the hills near Lake Tahoe where I grew up. I was just a kid and I would be the guy that would run down the valleys to flush the deer out and there was a guy waiting at the bottom to shoot them. If I would have known at the time that I didn’t have a gun and they were firing toward me, I might have thought differently about it. 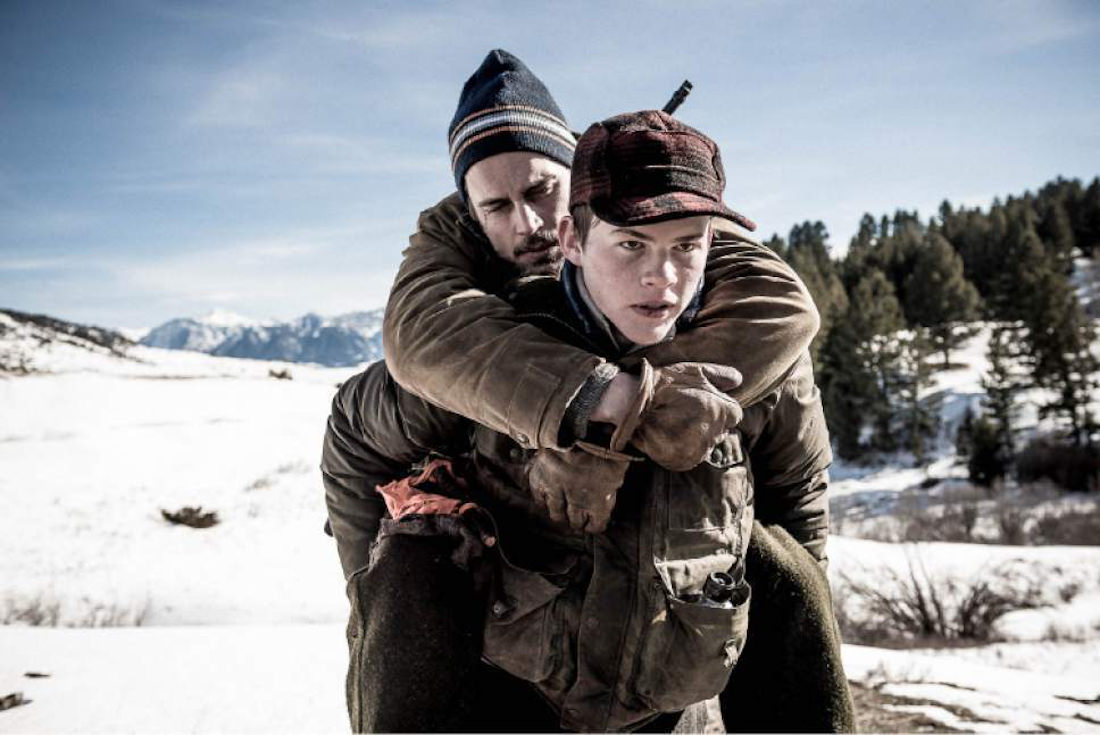 What was the most difficult part of making a movie in the mountains of Montana?

It was the weather, locations and the short days. We started out in Livingston, Montana which was just kind of like the Paradise Valley of the beginning of the story before they get up into the mountains and into the snow. So we started in November, shot for a month, then took about a month off. We came back in January and went up into the higher elevations. The biggest challenges really were to get to the locations with all of our equipment and being able to get there early enough to get a day’s work in. By the time we got up there, the sun was already coming up and it was going to go down in eight hours regardless. And then in some of the places where we shot there were trees or little valleys that truncated that time a little bit more. So sometimes it might not have even been a full eight hour day. Those are the largest challenges, but as far as keeping the gear working, that worked fine. We were completely prepared for that.

Were you able to manipulate the lighting at all?

It was pretty much “work with what I was given” for most of the stuff. It would be impossible to get a generator up there for any kind of lights. Sometimes we could truck a small generator in, but that wasn’t going to give me what I needed. It was fine—we had plenty of light and it was wonderful light. At that point, shooting exterior is kind of about controlling the light, anyway, whether that’s doing some negative fill or taking light off or whatever direction we might shoot. So that made it good that way. But it would have been tough to do any kind of augmented lighting in some of those locations.

Was it difficult to film in the snow?

Sometimes the white can be so white and blown out that it’s just not that appealing. So sometimes we would avoid having a lot of that, whether we reframe or shoot it a different way. I didn’t play with it much in post [production], but the others might have helped to take some of the snow out where it was really glaring and bad and worked with it to give it a little bit more character. With all the light that bounced around on that snow, it’s pretty incredible. You can get some magic out of it but sometimes you get into trouble with it.

How did you capture the gorgeous panoramic shots?

Just having some really wonderful anamorphic glass and basically just the depth of the locations where we pick a wonderful mountain in the background, maybe some wonderful trees in the foreground or water in the foreground. We just looked for those perfect locations that gave us really nice depth and this grand scope of a scale. There weren’t many bad places to shoot in Montana. Whatever we pointed a camera at was just beautiful and that worked really to our advantage.

You received critical praise for your flashback sequences. Can you tell me about those?

Those are interesting—the directors, Alex and Andrew [Smith] figured out how it should look and what we should capture. We all didn’t want this to be a sepia, old-time look. It didn’t feel that way. Instead of shooting those in anamorphic, I would use spherical lenses for those segments. Very subtle, but it was a different feel and that helped a lot. We used a lot of backlight and the times of day when we shot all of those really made it stand out. They’re just beautiful images and I think we get a little bit more contrast, a little bit more saturation to make them more vibrant and really stick out. They were gorgeous.

Do you have a favorite shot from the film?

There were a couple that were really cool. One of the openings to introduce the Cal character, we had a camera sticking way out the window of a second story in Livingston. We were seeing the mountain in the back and the town in the foreground. We also catch the theater on the side of the frame, the big neon old-school theater sign and we pull in from that and find Cal cleaning his gun at his desk. That was a really nice shot. It was kind of low-fi. We didn’t have cranes or anything. It was just a really wonderful way to introduce him. And the other scene that I’m just really ecstatic over is at the end, some of the images of David where he’s sitting by a fire and when he’s standing in the bedroom with his father. There’s just a beautiful look to it and emotionally, it’s so deep. I had a wonderful moment where he was looking down at his dad and real sunlight snuck through a little window and it was just on his face and it was at that moment where I think, emotionally, he was moving on to be the big grown-up in all this. It was amazing. I couldn’t believe it actually timed out like that. Those are the two that really blew my mind.