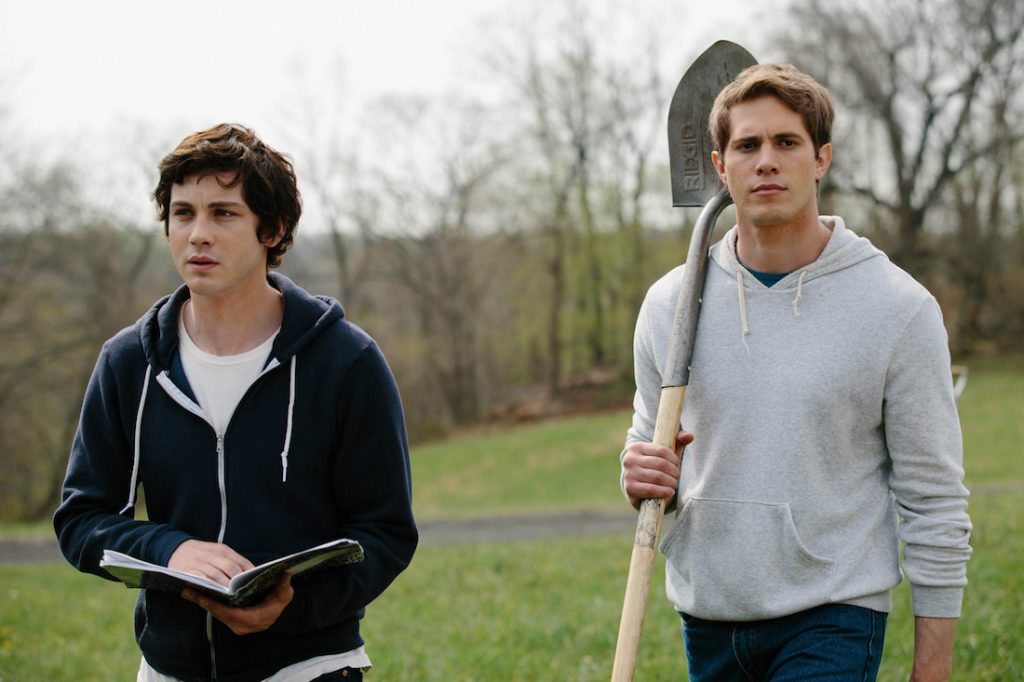 Logan Lerman (The Perks of Being a Wallflower) and Elle Fanning (Maleficent) star in Sundance selection Sidney Hall about a young novelist struggling with his own fame. Listen closely and it might surprise you that a single artist created the music. Composer Darren Morze wrote the film’s score and recorded it himself using instrument samples and his own audio creations on the computer. A self-taught sound engineer, Morze teamed up with Sidney Hall director and Stellastar front man Shawn Christensen after touring with the band. Christensen’s short film Curfew, featuring Morze’s music, won an Oscar in 2012.

We spoke with Darren about his journey from stage to screen, subtle tricks that make his music unique, using the computer as his instrument and more.

What is Sidney Hall about?

It’s a drama about an 18-year-old kid who writes a novel that ends up becoming the novel of his generation. He achieves all the accolades and success that an iconic author can achieve, and it ultimately ends up destroying him. It tells the story about that downward spiral in three different eras: him at age 18, 24, and 30.

Did the character of Sidney and his evolution drive the way you wrote the music?

The temptation was definitely there. Who wouldn’t want to do that? It would be such a fun challenge to have the music change with each era. Had I done it that way, it would end up just kind of sounding like a John Zorn record. It would sound crazy and just draw too much attention to itself. So the music was written, rather, to be the connective tissue of the film. The music when he’s 18 tends to sound a bit more whimsical and magical because it’s the golden period of his life, and that’s really where the difference between the eras ends.

How did you get involved in Sidney Hall?

Shawn [Christensen] and I have been working together for a long time now. I’ve done the music for all of his films to date. In fact, I basically started doing this because of him. He used to be the lead singer in a band called Stellastarr and I produced the demo that got them signed and then I ultimately became their live sound engineer and toured with them for eight or nine years. While we were on tour, he decided he wanted to start writing screenplays and directing short films and I asked him if I could do the music. It was literally one of those things where he was like, “Great, one less thing for me to think about.” One film led to the next film led to the next film led to the next film and so on. Now we have this thing where sometimes we don’t even really need to speak to each other. We have that great collaborative energy that we’ve cultivated over the years.

What is your go to instrument?

Like most composers, my main act now is the computer. I joke with people—they’re like, “What instrument do you play?” and I say, “Lead computer.” I started out as a drummer. I played drums in a million different awful bands in my 20s. Over doing that, I figured out that recording studios are pretty expensive and you usually never really end up with what you want, so I taught myself to engineer and then recorded my band and other bands would ask me to record them and I started to figure out that you can make money doing this. That led me to opening a studio and running that for 10 years or so and then was doing the live sound thing in addition to that. Then film composing brought the whole thing full circle back to me writing music again. Ultimately, the thing about some composing is that it’s not just about writing music. You’re also a sound designer and an audio engineer. You wear a lot of hats.

Has technology changed how you work?

The very first film I ever scored was still using tapes. I was watching the film on a DVD player and I didn’t have a way to connect the tape machine to the DVD player. I was literally with a stopwatch, which I hear is still how John Williams does it. It’s the old-school way of doing it. I definitely had an experience starting out doing that and never again. I’m so thankful to have all the software.

How did you record the score?

It was all in my studio at home. A lot of the music was all made on the computer. It would have been great to get a bunch of live musicians. Basically all the playing on the soundtrack is all me. But just because of the way the post-production schedule worked out, which was totally flying by the seat of our pants, working on the music up until the very last second, there was no time to have a proper recording session with real musicians. So if you don't like it, it's my fault. It's all me.

So where do the instruments and music come from?

It's all samples. I have terabytes of samples of every instrument you can think of and I'm basically just drawing it all on my computer. There's a couple cues that have piano that's me really playing the piano, and there's a couple cues where I'm manipulating a guitar to not really sound like a guitar anymore. There are actually a lot of cues in the film when I'm actually vibrating the strings of a guitar and then changing the pitch so it doesn't sound like that. There were a few things that were recorded, per say, but then the rest of it is all samples. I've done other scores where I've done cooler things, like go to a church and record a pipe organ or sample a construction site. I recorded a construction site with my iPhone and then loaded it into my sampler and use that as sounds. One particularly mischievous trick that I like to do a lot if I don't like a film that I'm working on is I'll actually take bits of the dialogue that I can't stand and then load that into the sampler and mutilate the words so that I'm actually using the dialogue that I hated as an instrument in the score. That didn't happen on this at all.

Do you often slide little Easter eggs into your music?

I don't really know how much other people do it, but I like to do subtle little tricks like that for myself that probably only I will ever notice. For example, on Shawn's last film, Before I Disappear, I really kind of became obsessed with the fragility of the character, Richie. Through the whole film, he's trying to kill himself. He's on drugs, loss of blood, you name it. He's not having a good night. For that score, I used tons of instruments that were made of glass. Anything I could think of that was breakable and fragile. I like to make little subconscious connections like that with music. Even if the audience isn't aware of it on a conscious level, I hope that it seeps into their subconscious somehow. I didn't really do a lot of that with this film. With this film, it was really more just about supporting the story and giving the movie its own voice and giving the character his own kind of musical language.

You’ve worked on a lot of different genres. Do you have a favorite?

No. For me, it's all about if it's a cool story or if it's a cool premise. I don't have a specific favorite genre. What I will say is that they never tend to line up with what you're in the mood for. But that's part of the challenge: you have to force yourself to get into that world and live in that space for a while. That's the thing that I enjoy most about the job. You get to go on all these little adventures and you get to live in these different worlds for a while. I'm all for escapism. I've always been a fan of escapism and now I get to do it every day. That's probably the thing I'm most grateful for and love about doing this.