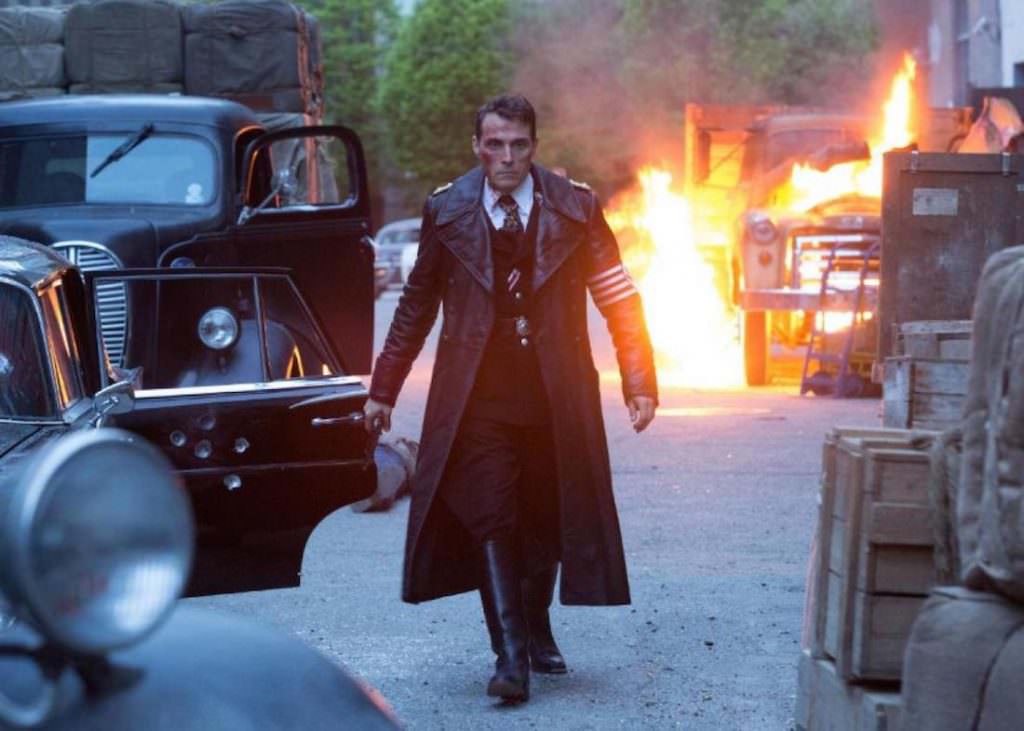 Based on Philip K. Dick’s chilling 1962 alternative history novel, The Man in the High Castle has become Amazon’s most watched original series. Set in a world where Hitler’s Reich and Imperial Japan were victorious in World War II, the action explodes from the opening scene with high stakes tension and a season long mystery. Composer Dominic Lewis wrote the first season’s score with Henry Jackman and took over the reins in season two. If you feel like the show’s music captures your feelings at the most dramatic moments, that’s because it’s often an authentic reaction. Lewis records himself playing the cello for the score as he watches the scenes unfold.

We spoke with Lewis about reimagining the music of a history that didn’t happen, composing in real time, the now famous necklace scene, and more.

I love the cover of Edelweiss for the opening sequence. Did you create that track?

My involvement with it was basically recording, helping choose the vocalists, recording the vocals and then creating the sort of offset undertones underneath it.

It’s so beautifully unnerving. Did it help set the tone for the rest of the music?

Yeah, it did kind of pave the way for what I would do with the score in the way that it took something familiar and made it creepy and strange and unsettling. Scenes for characters that would normally be considered – not happy, but not necessarily strange and weird, but then using other elements – low elements, high elements, to kind of offset those themes. Much like Edelweiss. It really helped me pave the way for what the score should sound like, in a strange way.

The show has historical elements and takes place in 1962, but not the way we know it. How did you capture what on the surface appears familiar, but is clearly, terrifyingly surreal.

It's strange, because its kind of period but it isn't because it's not real. It's a really strange one to try and describe. We would have very lengthy discussions every week about what songs we should use, what songs we could use, whether they existed, and if they didn't exist, what was the reasoning behind putting it in the show. Could it have happened in some strange way?

Japan and Germany control the U.S. in the show’s universe. Did those cultures have an influence on the music you wrote?

In terms of the cultural thing, I wanted flavors of it but I didn't want to be overt about it. For the west coast and for the Japanese influence, I would take elements of Japanese instruments and use them in a non-traditional way. Just taking Japanese bells and things like that and using them not as the Japanese would use them in a traditional sense, but more like a ticker or distorting them and messing with the sound so it became another device within the film music. That element of the Japanese world is there, but it's not screaming "Japanese music." We didn't want to do that. Same on the east coast with the German influence. The German themes tended to be more brass-oriented, but not in that kind of stereotypical Germanic way. Delicate horn lines, little flavors of what we would think those cultures would give to us musically, but not in a stereotypical, traditional way.

What was the theme that you created to tie the whole show together?

It was based around what I call the tent poles of the western orchestra. Taking the families of a western orchestra, whether it be strings or woodwinds or brass or percussion, and using strange elements to offset it. The theme that we hear at the beginning of the show, that kind of undulating piano motif, it keeps coming back. It feels like a travel motif with a lot of people trying to get to where they want to be. At the beginning, we hear it when Juliana's watching the film for the first time. That, I would probably put a flag in to say is The Man in the High Castle theme. It appears on both coasts, it appears when multiple characters are on screen together, and it kind of pushes the story forward and gives it the energy that it needs. And then I have all the other themes for different characters.

What were the themes you chose for each of the characters?

With Juliana's theme, she was often portrayed with a piano or a cello, and then there's that kind of circling clarinet motif. And Frank was often portrayed with a bassoon in the first season. Joe from the east coast, I would use the French horn most of the time. And Smith was a tricky one, because we didn't really want to do what one would normally think to do with Smith. Often we didn't score him at all. Rufus's portrayal of him is just so amazing and so evil, yet you like him. It was often just, "let him do his thing." And then when we did add musical identity to him, it was very basic and out of the way and menacing. As we move into season two and we kind of see a more human side of him, he often would have moments of cello melodies just to make him slightly more appealing to the audience and show his human side.

Did you have a favorite piece of music you wrote for the show?

My favorite theme, I think, is apparently on YouTube called “The Necklace Theme” which seems to be very popular. It started out with the necklace and it's very much been pinned to Tagomi and his travel. That theme then becomes – not time travel, because it's the same time, but that sort of realm-travel theme and whenever that theme appears, it's with the more magical, sci-fi things happening in the series. That's my favorite theme.

Did you have a favorite scene that you were most excited to score?

My favorite scene – that's tricky. There are so many great ones. I could tell you the most difficult one, which was the graveyard in episode seven of the first season. It really hit me for some reason. Often you have to be in tune with the emotions of the show, obviously. But with a show like this, if you get too involved with it you just end up being depressed most of the time because it's so unsettling. Juliana goes to see Trudy, her sister, in the graveyard. That was really tricky. I know that's not my favorite scene to do, but I was really happy with where it got to, musically. It was pretty stressful to score that scene and watch it over and over again.

What is your method of writing?

I play cello on everything, which helps. Oftentimes, it's really useful having the cello as a writing tool. There's a whole process when you have to score for other people: click tracks and making sure you're hitting everything and moving tempos around, which is all really complex and boring. But when I'm playing, I just set my soundscape. I set up the atmosphere, and then I just watch the picture and play to the picture and just react with the cello. It gives it way more emotion just reacting to it like that. That was a really cool new way of scoring for me. I've always been so by the book before because other people have to play it. But when I play it, I just like to sit there and watch it and react.