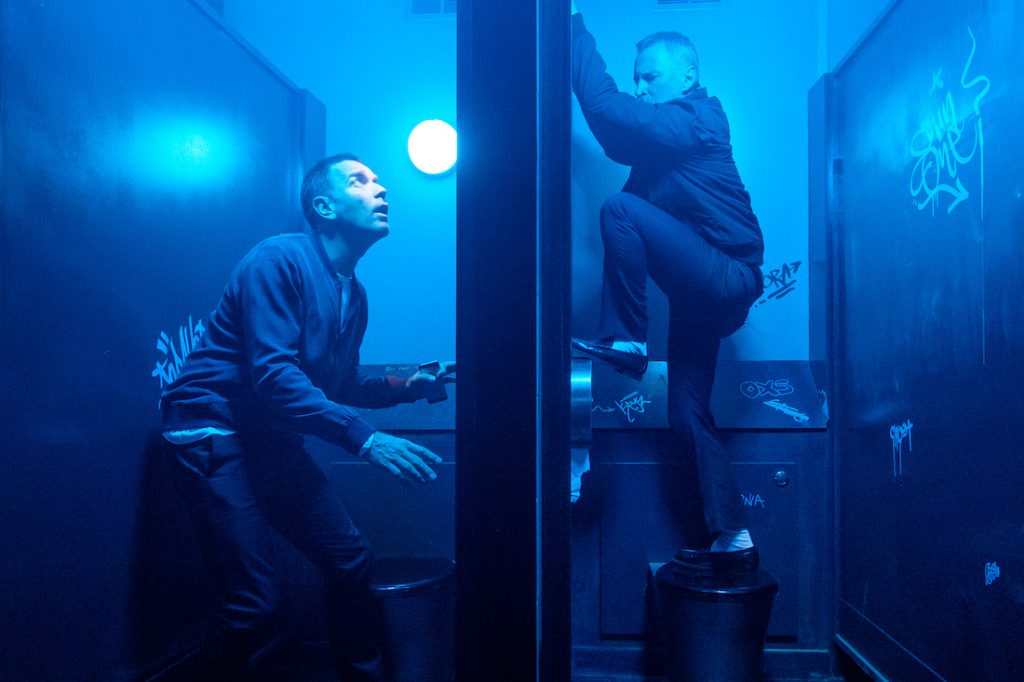 Having run off to Amsterdam with 16,000 pounds after a heroin deal at the end of Trainspotting, director Danny Boyle’s sequel, T2: Trainspotting, sees Mark Renton (Ewan McGregor) return, after twenty years, to Edinburgh. If his Dutch wife and children named Laura and James, seem too bucolic to be believed, it’s because they are. Boyle’s sequel, which screened at the Berlinale film festival on Friday, is not the triumphant tale of four boys who got sober, grew up, and managed to get picket fences.

With the exception of Begbie, who has spent the past two decades in jail, the boys have taken a few stabs at adulthood, most of which are failures. Sick Boy (Johnny Lee Miller) is still peroxide-platinum, but he mostly goes by Simon now, and when he does his roots, he touches them up carefully, using a toothbrush. But Mark isn’t in the pub Simon now runs for more than two minutes before Sick Boy decks him. The bar’s two or three committed octogenarian drinkers cover their beers and impassively look on while the two smash bottles and wale on each other, an overdue release of twenty years of Simon’s rage at Mark’s theft. Meanwhile, Begbie (Robert Carlyle), gets out of prison, and not because he’s being released early for good behavior. He is still a violent, terrifying nut, albeit one who, reunited with his wife after climbing through his bedroom window, learns he now requires marital aids. Poor sweet Spud (Ewen Bremner) is on heroin again, having first lost his construction job, his benefits, and then access to his wife and son. The only member of the drug deal to ever get his 4,000 pound cut from Renton, by way of a greeting, Renton’s return to Edinburgh sees him help Spud out once again, this time a rescue in a truly dire moment.

The film, which is really about the disappointment of adulthood, can be very sad, but it’s not all pathetic. There are plentiful references to the first film. Drugs are still around, now more often snorted than injected, but still. Some might argue, again, that they are being glamorized. Poor Spud, who doesn’t take long to wind up spewing bodily fluids, is a rejoinder to that notion. Visiting his old bedroom, untouched after twenty years, Iggy Pop’s “Lust for Life” even sees the record player’s needle, for about a half a bar. Still frustrated with his old friend, Simon accuses Renton of being “a tourist in your own youth.” The notion is also true of the film, but no one can ever tour the exact same place twice. The film is not just a glut of nostalgia, of which, Boyle said at the press conference, “it’s a resource and an enemy at the same time. You have to be in control of it.” The boys have cell phones now, Simon is on the run from an enraged Begbie, Begbie tries to turn his criminal tendencies into a family business by dragging in his son, and learns the next generation has other ideas, and the beautiful Veronika (Anjela Nedyalkova), greatly admired by both Simon and Mark, is from Bulgaria. (The film was being shot when the Brexit happened; in marking Scotland’s progress by sending up aspects of Europe — a Slovenian in a plaid skirt welcomes Mark and other travelers at the Edinburgh airport — now, however inadvertently, T2 could also be seen as a tribute to it.)

T2, which was thankfully not named its working title, “The Least Unfamiliar,” is also fun, at points. “I didn’t want to disappoint people by doing something by the numbers,” Doyle explained his decision not to even send screenwriter John Hodge’s first shot at a sequel to the actors. Instead, the two went to Edinburgh for inspiration, and “John wrote something much more personal than we expected.” So no, the boys are not doing well, and Simon and Begbie are certainly not doing good, either. But there is a great club scene, partly made possible by the advent of smaller cameras, Boyle pointed out. The soundtrack is really enjoyable, both on its own and an appropriate sequitur to Trainspotting. “We swore we weren’t just going to redo it,” said Boyle. Prodigy contributed a remix of “Lust for Life,” and an Edinburgh band with roots similar to the characters in the film, Young Fathers, was tapped for a couple tracks. “We brought them in to look at the set,” said Doyle, “and they seemed unimpressed, as rock stars often are.”

Like the boys, Edinburgh has evolved. Boyle praised its influx of students and a new, dynamic migrant population. One journalist asked if they might even be there because of the first movie. If there’s any reality behind that idea, given how things turn out at the end of the second film, one hopes the city’s wave of newcomers weren’t too literally inspired.