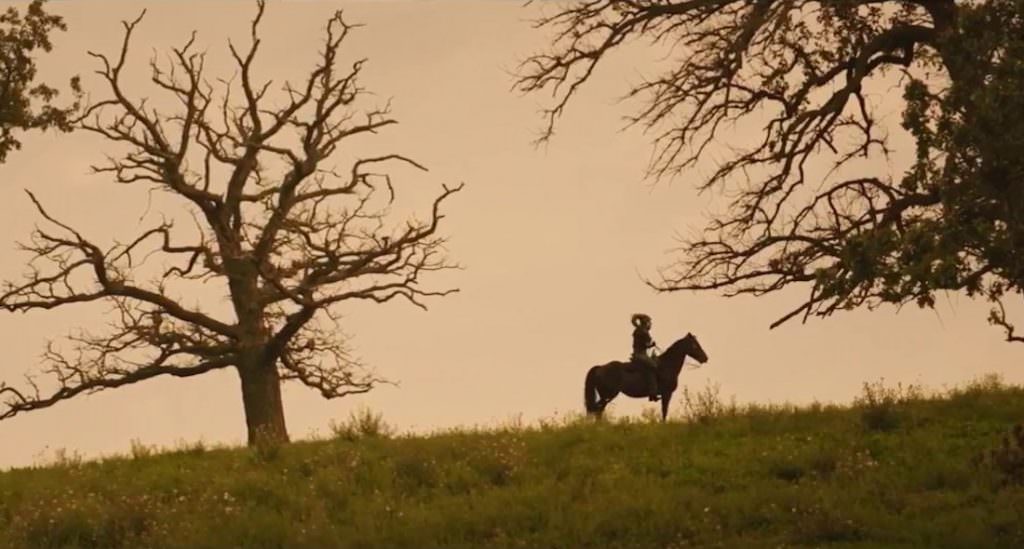 American Fable, which is available today, is an American gothic style fairy tale set against the farm crisis of the Reagan era that manages, without overt effort, to speak directly to today’s anxieties. The heroine of the story is Gitty (Peyton Kennedy), a soulful, intelligent young girl who finds herself in a major predicament when her father, pushed to the brink financially, makes a desperate decision that could spell doom for the entire family. The family’s fortunes, or lack thereof, are tied to a man who has been captured and imprisoned in an old silo on the farm. Gitty finds and befriends him, but learns soon enough that he’s supposed to be the enemy, a real estate developer who plans on buying the family’s land. His misery equals their happiness, and vice versa, giving the film a similar narrative structure to Ursula Le Guin’s devastating short story “The Ones Who Walk Away From Omelas.”

Written and directed by Anne Hamilton, a former law student who left her career path to pursue her passion for film (and ended up working with Terrence Malick, no less), American Fable was born in the 2014 AFI Directing Workshop that Hamilton won a place in. Lushly shot and wonderfully acted (Kennedy is marvelous as Gitty, as is Richard Schiff in the role of Abe, the family’s prisoner), American Fable combines a portrayal of realistic financial anxiety and surreal gothic fantasy into a singular, compelling film.

The look of the film belies its modest budget. In fact, it subverts the gothic DNA of Hamilton’s story with rich, honeyed color.

“My DP Wyatt Garfield is extremely talented,” Hamilton says. “That was the first major decision I made, was to hire him. We had a really extensive discussion about lenses. I didn’t know much about them, and when I was interviewing him I really liked him as a person, but he’d done a lot of gritty, hand-held indie films, and I wanted to do something more classically composed and painterly, so I showed him examples. And he was like, ‘Oh, you like wide lenses.’ So we lived on the 18 for the whole movie.” 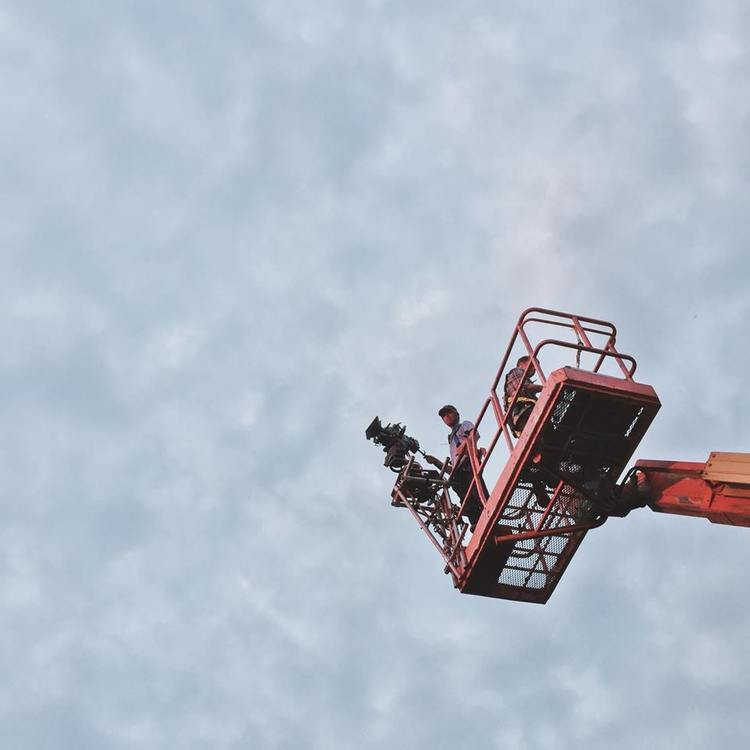 For daytime scenes, the film has a dreamy quality that is only really available during magic hour, the time right after sunrise or right before sunset that provides a softer, redder light than you can get any other time of day. Because of the small window of time available, filmmakers usually need to find some way to extend it, and for Hamilton, this meant using a special kind of lens.

“We really wanted to capitalize on magic hour and shoot outside as much as possible, but those were two things were in direct conflict with each other, as magic hour is a short period of time and you get once a day. So Wyatt put a tobacco filter on the camera, which let us extend us magic hour from one hour to four, and gave us that golden image. All the reds really pop. When you look at Giddy, everything’s super golden. The greens are emerald, her skin is beautiful, and her jacket pops.”

Hamilton first got the idea for the story about Gitty and Richard Schiff’s character, Jonathan, in a single image—a young girl in a field covered in blood. Only the blood’s not hers, and what she’s doing is completely normal to people who live and work on farms.

“I had this image of the east coast and Midwest coming together in a scene that I’d shot in the short film, for the AFI directing workshop for women. A girl is field dressing a deer, doing this very graphic thing, and then this man pulls up, whose much older, very wealthy, not from that world, and he knows her name and she knows him. There’s a silence between them as she’s got this knife in her hand. I couldn’t shake that image, so I ended up writing a very different story based on that being the first scene of the movie, but it didn’t work, so I thought maybe this was them reuniting, and for the way for them to meet was him being a captive. A great place to hide someone is in a silo, because in the Midwest they’re everywhere. It became her story, when she realizes her parents aren’t who they seem to be, and her life isn’t what she thinks it is.” 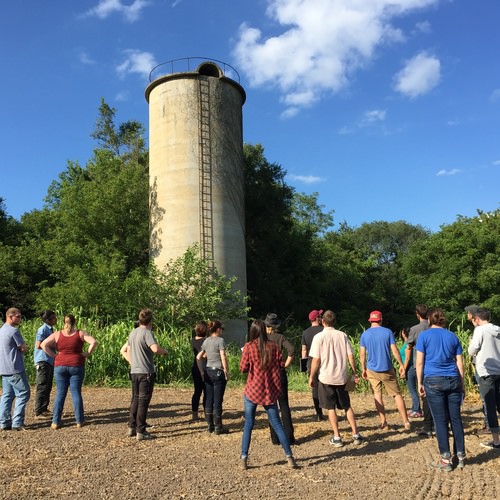 One of the most arresting relationships in the film, outside the central one between Gitty and Jonathan, is that between Gitty and her brother, Martin (Gavin Macintosh), who is, shall we say, not kind. The first time we meet him, he’s chopping wood, and dares Gitty to put her hand on the chopping block. Is this just the usual older brother bully routine, or something darker? Martin’s behavior for the rest of the film answers that question, but Hamilton doesn’t take nearly as dark a view on Martin’s behavior as the viewer might, however.

“That chopping block scene was one of the first I wrote for the movie. I haven’t analyzed this about myself, but Martin is such an easy character to write because he’s so pure. I know so many people like that in the Midwest; he’s very pure and very scary. But also very human. There’s a great scene in another movie that’s about this sort of thing in Boys Don’t Cry, when a kid talks about how he cuts himself just to feel something, and it’s about this despair about not having a future, and this deep anger about not mattering. You don’t really see this in cities. Martin was so easy to write, he’s a real person.”

The film’s cast is uniformly excellent. The process required a massive search to find Gitty, the film’s heart and soul.

“We had a great team, Meg Morman and Sunny Boling came up with Rusty Schwimmer (she plays Ethel, a noisy neighbor who gets involved the family’s deception). As for Peyton, she was someone I’d seen when she was younger, on a different movie, and I remembered this beautiful innocence about her. Peyton was from Toronto, and she had this wonderful purity and playfulness, and I didn’t forget it. When we were looking for Giddy and we’d done one pass, and we searched another 300 girls, and I remembered Peyton and got her to send in a tape, and it was so clear she was Gitty. She was already 11; she was at the age where you could believe she would be making these decisions. She’s pure talent, so mature and grounded and more adult than a lot of the adults on set. I was thrilled by the fact that we were able to find an 11-year old who could carry this member.” 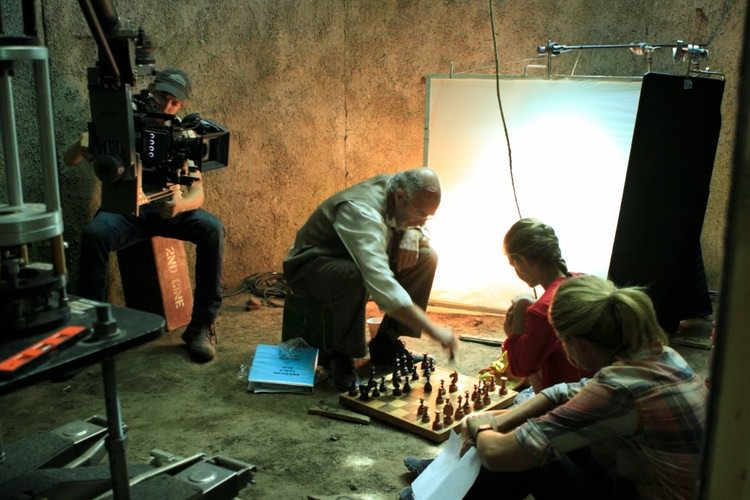 “You don’t have a lot fast talkers in the Midwest,” Hamilton says. “And then Richard Schiff was my producer’s idea—she’s a huge fan of the The West Wing, and Richard’s such a talented, underrated actor. He came on set and everybody’s game just went up. And I really believe this about casting, I believe you get the right people if you hold out long enough. We were getting pressure to cast that character sooner, but we waited, and it was worth it.”

Hamilton still pinches herself that, not too long ago, she was on a completely different path.

“It’s so improbable that I would have made a movie at all. I’m so grateful and happy about it,” she says. “Four years ago I was working towards being a lawyer, and wanted to do this and had no idea if I’d be good at it. I quit my job in late 2013 and started working on this, and there were a lot of times where it was completely insane to keep working on it, I should have gone back to the firm, but it was all worth it. I love getting to be here now, in this place. One of the best pieces of advice I got was from a friend who used to be an attorney and who is now a shorwunner Goliath, he said, ‘You gotta burn your ships, or you won’t put your all into it.’ Every time I think about taking the bar, my insides say no, it’s not what I’m suppose to do with my life! I’m supposed to direct. My mother’s always like, ‘Take the bar!’ She’s very practical. But if I take it, the universe knows you’re not serious.”