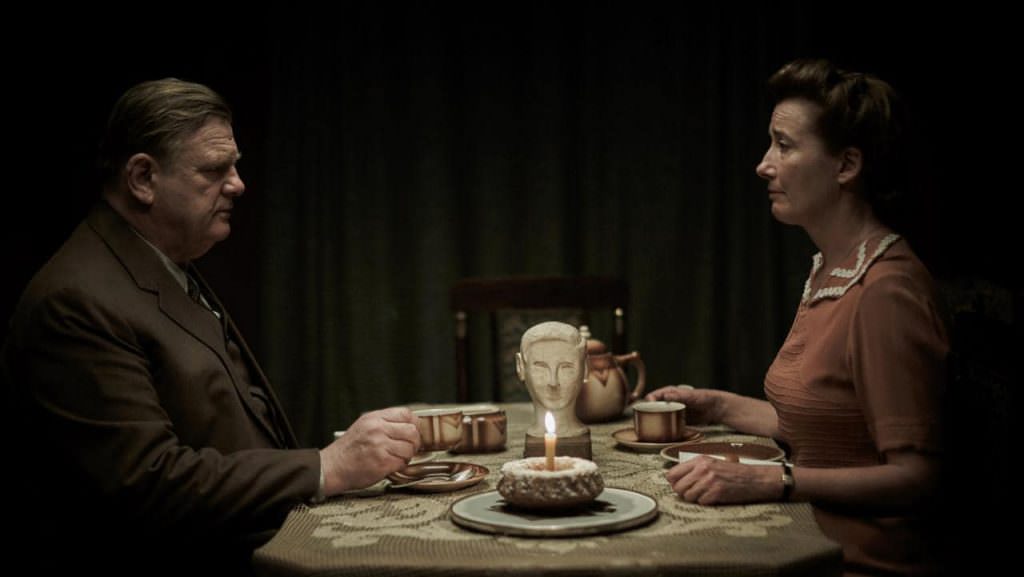 A somber, restrained World War II picture, Alone in Berlin, opens this week from director/actor Vincent Perez. Swiss by birth and of Spanish and German ancestry, Perez optioned the rights to Hans Fallada’s 1947 novel, Every Man Dies Alone, two years before an English translation in 2009 became a surprise bestseller in the UK and US. The story of Nazi resistance from a working class Berlin couple, in fiction Otto and Anna Quangel (Brendan Gleeson and Emma Thompson) and in history, Otto and Elise Hampel, is also a tale of love. In 1940, the Quangels are not particularly political, until they lose their only son to fighting in the Ardennes. First Otto, and then Anna, embark on a crusade of guerrilla resistance, leaving handwritten anti-Hitler missives like “Mother! The Führer has murdered my son. Mother! The Führer will murder your sons too, he will not stop till he has brought sorrow to every home in the world” on postcards around the city. As they do so, their sour marriage is sweetly rewarmed.

Eventually caught by a morally ambivalent policeman, Escherich (Daniel Brühl), the Quangels’ resistance ends with sentencing in a Nazi “People’s Court.” Perez, who co-wrote the script with Achim von Borries, sensitively approaches their fight and demise as well as the parallel stories of an elderly Jewish woman, a neighbor in the Quangel’s building, and the conflicted, pressured policeman Escherich. We caught up with Perez, currently on the Russian-Mongolian border as he makes his way across Russia for a photo documentary project, on his time with Alone in Berlin.

You optioned Hans Fallada’s novel back in 2007, before it became well-known in England and the US. What drew you to the book?

I read an article in a newspaper about the book and I was straightaway drawn into the story because of the description of the way people were living together in that building in Germany in 1940. I was attracted to it, because I am half German, my father’s Spanish. I always wanted to know more about that period because it’s such an incredible, fascinating, scary moment in European and world history. I was asking myself a lot of questions about how an entire country could follow a dictator like Hitler, and how people went for that. I’d been reading a lot, and every time there was a book which was bringing something different, something new, I was interested in that.

What I liked about Hans Fallada’s book at first was the description of those ordinary people and the way he was telling about the everyday life of regular German people, which goes beyond what we know about the Nazis. I always ask myself what would I have done if I was living in that period? What would have been my position then, after all that had happened since the first world war? It was a little bit of all that that attracted me to [Every Man Dies Alone]. And then I read the book and fell in love with the love story between those two people, [Otto and Anna Quangel] how they were dealing with their grief, the loss of a child, and handling the situation, living in this Nazi period.

Fallada was commissioned to novelize the story of Otto and Elise Hampel, and in doing so, changed some aspects of their story. When adapting the novel into a script, what was your process like for balancing the fictionalized version with the original events?

I think the movie is a little bit between the real story and the Hans Fallada book. I did research about the Hampels, the real story of the couple, but most of all we stayed in the book. Then it was very difficult because we had to make decisions, to sacrifice part of the story. We had to make decisions which were quite tricky, and then we went into a script structure that was strong enough to make a film with. Which means the love story, at the heart of the film, and the story of the building, which I thought of as a part of the arena, where all those characters are living under the same roof. It was a microcosm of the German people at that time. which I thought was fascinating. People living separated by one floor, and having totally different ways of managing life at that time.

And what about the film's antagonist of sorts, Escherich the policeman.

Escherich's not a bad man, he’s a policeman who has to work for the Gestapo. I thought the hierarchy of power was something interesting, to be able to follow a character like Escherich who’s under the pressure of his superiors, who are under pressure from their superiors. It was cinematic and interesting. He’s a great character. He was the only one who read all the cards, who changes several times throughout the story, believing the Nazis are stupid, and then has to kneel in front of them, break, become one of them. The chronological story will show him like a mirror, that he was wrong.

You’re multilingual — in what language did you first read Every Man Dies Alone, and what made you decide to do the script in English?

I read the book in French. And then I started to work on the book, to adapt into a script. At first we decided with the producers to make it a movie in German. I even cast the script in German, it went quite far. We couldn’t find the financing. So we kind of failed and then a few months after, that’s when the book was translated in English, and became this phenomenal success in English. So then with my producer, Stefan Arndt, we started to think about it in English. It suddenly became a story that we wanted to tell not just the German people, but to everyone in the world. The English language is this neutral place where everyone can understand. The story became universal, it was something that everyone could project themselves into. It kind of changed the moral of the story, it’s not a story you tell for the German people, it’s a story you tell for all of us.

Where did you shoot most of the film? Were the final locations what you originally envisioned, when working on the script?

This was another aspect, having to recreate a town that was completely destroyed by bombs. They say we can’t count how many bombs fell into Germany during the Second World War. It was like 25 Hiroshimas. You can imagine how this country was completely flattened, everything was destroyed. I realized that while doing the scouting, trying to find locations from that time. There are still places, but most of the old buildings were destroyed. We shot most of the interiors in Berlin, and we shot the Gestapo location just outside of Berlin, where we saw empty buildings, like a ghost university that was built right after the war by the Russians on the eastern side of Berlin. Right next to where we were shooting, there was the old Goebbels house where he took his weekends. So we were not far from that thing, that fear I tried to recreate in the air, the heavy thick air of another time.

Then we went to Görlitz, at the border of Poland. Same thing there. So this town was destroyed by bombs and you can find the same buildings which were in Berlin, with five floors. Lucky enough, one part of the town with all those buildings was like a ghost town. No one lives there. So we used the building the way it was, but some ceilings were broken so we had to reconstruct them, some floors we had to make stronger to bring a crew in. But we shot in the real location. There was a lot of reconstruction in the streets in front of it. We shot also in Cologne, we did some interior places there.

Do you see the novel and your film having modern-day parallels regarding the increasing prevalence of authoritarian figures and governments in the West?

When I meet people after the screenings, there’s always a moment when someone’s asking me that question. I think it’s great. I think it’s accurate. It’s something everybody has in mind, that the extremes are rising up all over the world. We have a very short memory. A tendency to forget. It’s important to tell again these kinds of stories. Yes, we have to be careful. Yes, it’s always there, it’s in the soil somewhere, it’s part of who we are, the extremes. It comes from years of frustration, years of humiliation, that’s what creates the soil for extremism. I think we have to go back to why this is happening, and why it is happening again. I think the movie questions that. I think that’s maybe one reason this movie was made, it’s just a way to question people. It’s a way for people, coming out of the screening, to think about it. It says what Barack Obama said in his [farewell] speech, I watched that here, far away from the US — when he said you can change things, don’t wait for others to change it. You have to start with yourself. That’s exactly what the Quangels were doing. At the end of the film, they’re not victims, they were winning. They were right. The future wasn’t with the Nazis, it was with people like them.