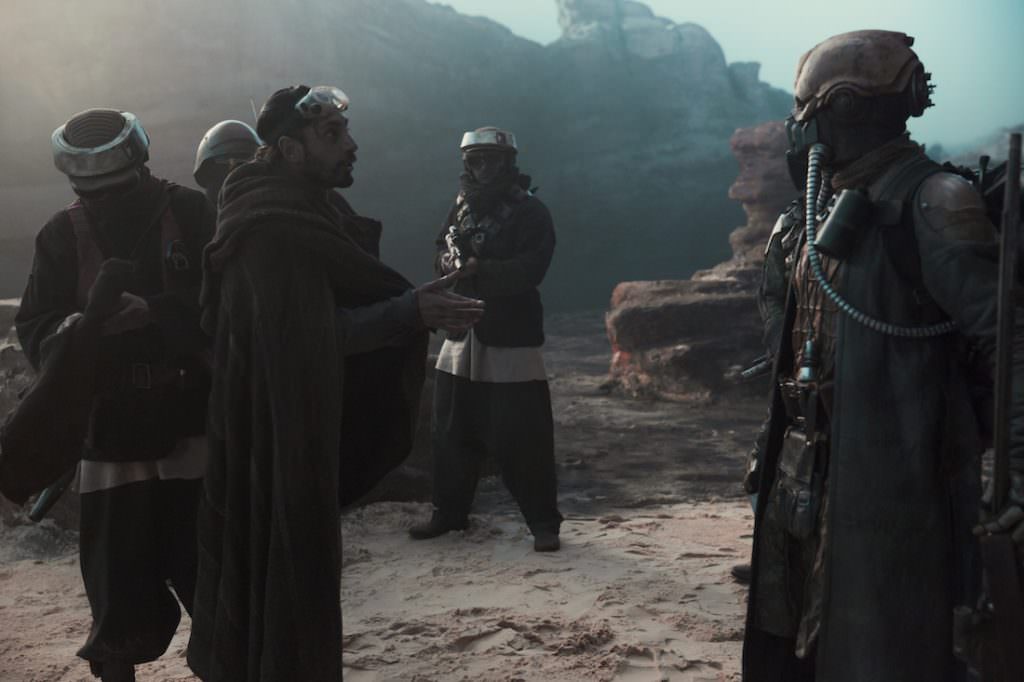 One of the many delightful aspects of Rogue One was the films' treatment of the many aliens Jyn Erso (Felicity Jones) comes into contact with. Some of the aliens are recognizable to any Star Wars fans—who among us didn’t delight in seeing Admiral Raddus, a member of the Mon Calamari race, supporting Jyn and the rebels' mission to the steal the Death Star plans? You may be forgiven for assuming on first blush that Admiral Raddus was, in fact, Admiral Ackbar, an alien character from the original trilogy who also pops up for a cameo in The Force Awakens. This would be because Ackbar and Raddus look a lot alike, as members of the amphibian Mon Calamari species. As Slate’s Marissa Martinelli pointed out, while these memorable Mon Calamari have command positions in the rebel alliance, you can also find “Mon Cal princes, Jedi, senators, even ballerinas—go rewatch Revenge of the Sith if you don’t believe me.” These aliens come from an aquatic planet called Mon Cala, where most of the planet’s residents live beneath the vast ocean.

The larger point here is that the alien races viewers come across in any Star Wars film, and in Rogue One specifically, have sprawling back stories. There is no alien on the screen that’s merely there to spice up the frame. And for proof of this, look no further than Lucasfilm Story Group’s Pablo Hidalgo and his new book, “Star War: Rogue One: The Ultimate Visual Guide.”

Hidalgo chatted with StarWars.com about the many aliens that populate the film, revealing their stories even if they were only on screen for a couple of seconds.  Take the very first alien we see, the dozing, tentacle-faced fellow prisoner sharing Jyn’s cell with her at the beginning of the film. The Empire is holding this creature, like Jyn, captive. Hidalgo informs us that this alien is a she.

“The novelization of Rogue One by Alexander Freed clarified that Jyn’s cellmate calls herself Nail. In prison, I guess it’s worthwhile to have a tough nickname. Turns out everyone else calls her “Kennel” because she’s got parasites. Her “real” name is Oolin Musters. And she is played by Kiran Shah (a man, but hey, that’s acting for you),” Hidalgo tells StarWars.com.

Originally the creature was designed to be a pedestrian on the streets of Jedha City, but for one reason or another got “promoted” to becoming Jyn’s cellmate.

In the featured image above you’ll see one of the “Two Tubes” aliens. There are actually two in the film, Edrio and Benthic, and they’re described as Tognath “egg mates.” They are ostensibly good guys, as they’re fighting alongside the former rebel legend (and now rebel outlaw) Saw Gerrera (Forest Whitaker). Hidalgo explains that Tognath aliens “hatch from eggs that nurture in a suspension jelly…while in that jelly, two or more eggs might graft together and create a bond that continues throughout their life. But those eggs don’t have to come from the same parent.”

Finally, one of the aliens that became an instant fan favorite was Pao, a rebel soldier (you can see the creation of Pao at the 24 second mark in the video above). Pao is a member of the Drabatan species, who Hidalgo calls “a bit more gung ho than your average Drabatan.” Despite his fearsome, battle-loving persona during the events of Rogue One, Hidalgo says that he had been a mild-mannered civilian before joining the Rebellion. “He was an engineer who felt he had to do something about the Empire.”