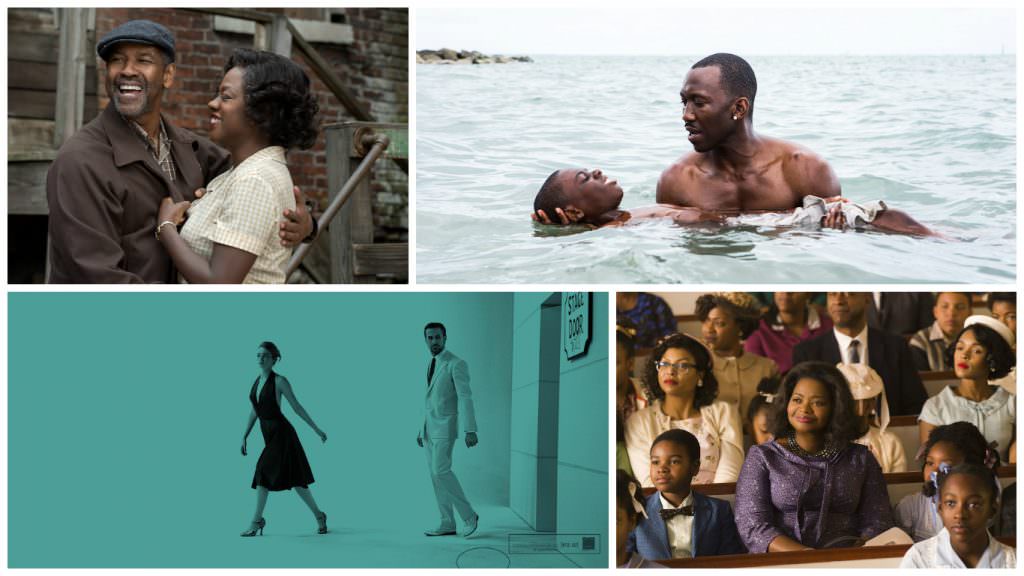 As expected, the breezy musical La La Land earned the lions’ share of Oscar nominations — 14 in total, tying it with Titanic and All About Eve for the most in Academy Award history — and Oscar voters reversed last year’s dearth of nominees of color by nominating a record six black actors for awards.

Mahershala Ali and Naomie Harris each received a nod for their supporting work in Moonlight. Viola Davis (Fences) and Octavia Spencer (Hidden Figures) were also nominated for supporting actress. Ruth Negga (Loving) was joined in the lead categories by Denzel Washington of Fences.

None of this was much of a surprise when the nominations were announced January 24, thanks to the many precursor awards that offer a reliable preview of the Oscars. But there were some unexpected nominees, led by Mel Gibson’s best director nod for the World War II drama Hacksaw Ridge. Gibson, who won the directing Oscar for Braveheart in 1995, had been something of a pariah in Hollywood over the last decade for his controversial off-screen behavior. The Oscar love for Hacksaw Ridge could signal his professional redemption.

It was also unexpected to see Hacksaw Ridge rewarded with best picture and best screenplay nominations, and a best actor nod for Andrew Garfield who beat out some pretty big names such as Tom Hanks (Sully) and Joel Edgerton (Loving).

The eight nominations for Moonlight, while not a complete surprise given its critical reception and Golden Globe win for best picture, was still remarkable for a small film with an all-black cast of mostly big-screen unknowns. Besides being one of the eight films nominated for best picture, Moonlight director Jenkins became only the fourth black best director nominee in Oscar history. Jenkins is also nominated for the screenplay he adapted with Tarell Alvin McCraney, whose play the film is based on.

La La Land, the much-beloved contemporary musical, scored in nearly every category it was eligible for including Best Actor (Ryan Gosling) Best Actress (Emma Stone). It also earned frontrunner status in the scoring and song categories. The frontrunner for song has to be La La Land which earned two song nominations "City of Stars" and "Audition (The Fools Who Dream)".

The other big winner was Arrival, which scored eight nominations including best picture, director, screenplay, editing, design, cinematography and two for sound. There was no nomination for its stirring star, Amy Adams. This year, the best actress category benefitted from a bounty of highly regarded performances. Lauded French actress Isabelle Huppert got her first-ever nomination for Elle; if she wins, it will be the first time since Marion Cotillard won for another French film, La Vie en Rose. Another surprise was Meryl Streep setting another record with her 20th nomination for Florence Foster Jenkins. Streep has won three Oscars to date.

In the less-high-profile categories, there were also some notable nominations and omissions. Finding Dory, one of the biggest box office hits of the summer, wasn’t nominated for animated feature as was expected. Jackie didn’t land a best picture nomination, though it did earn nods for costume design and score. A win for composer Mica Levi would make her just the fourth woman ever to win in the scoring category. (Rachel Portman won for Emma in 1996; Anne Dudley for The Full Monty in 1997; and lyricist Marilyn Bergman won for Yentl in 1983.) The always competitive documentary category included Ava DuVernay for 13th. DuVernay, you recall, didn't get an Oscar nod for directing the sensational Selma. It's nice to see her getting the nod for one of the most important docs in years.

The Oscars will be broadcast on Feb. 26.