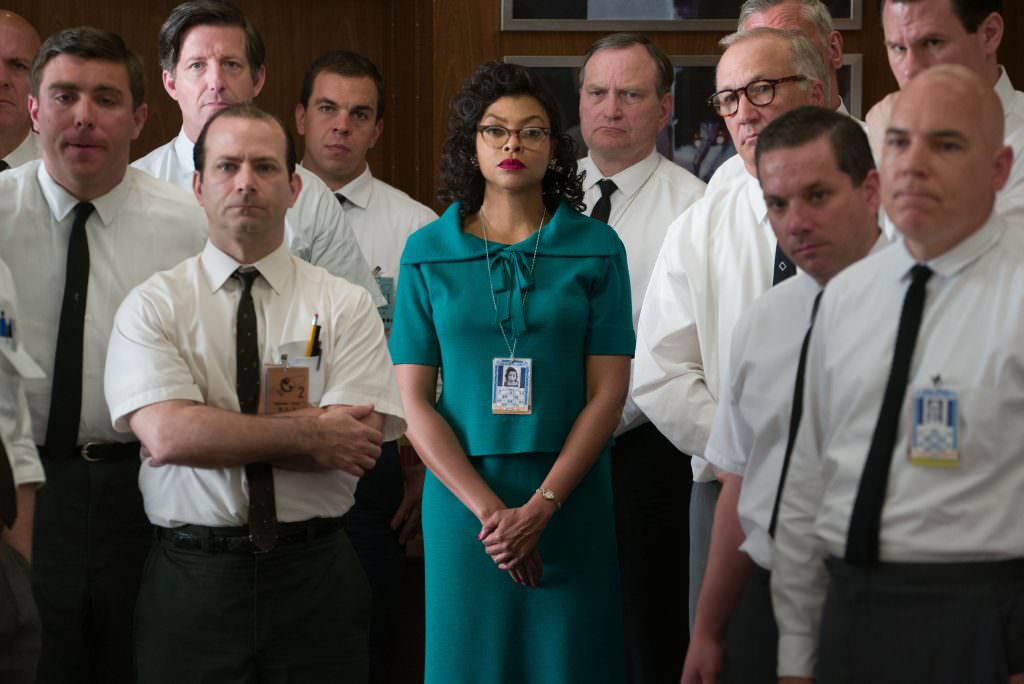 It’s an exciting and extraordinary time for screenwriter Allison Schroeder. The Hidden Figures scribe has been nominated for an Oscar for Best Adapted Screenplay, is a finalist for a Humanitas Prize, and also received WGA, BAFTA and Critic’s Choice nods — all this after being named one of Variety’s “10 Screenwriters to Watch” this past November and giving birth to her first child.

“It’s incredibly surreal, and I would say that my little baby girl has been keeping me incredibly grounded,” says Schroeder, who also wrote Mean Girls 2. “I will never top these two months of my life ever again… I’m very blessed.”

And seemingly born to tell the true tale of Hidden Figures, which centers on the trials and triumphs of three brilliant female African-American mathematicians as they battle racism and sexism at NASA in the 1960s, just as astronaut John Glenn prepares to launch into orbit. (The film stars Taraji P. Henson, Oscar nominee Octavia Spencer and Janelle Monae and is based on the book of the same name by Margot Lee Shetterly.) Schroeder’s grandparents worked at the space agency in Cape Canaveral — her grandfather as an engineer and her grandmother as a software programmer — and she herself interned there as a high school student, then landing a job at a missile launch company after her freshman year of college.

The Fox 2000 drama has been a leader at the box office as of late, a boon for Schroeder who shares screenplay credit with the film’s director Ted Melfi. Future projects for the rising writer include an action-adventure story about Agatha Christie, now in development at Paramount, and a musical pilot she is collaborating on with Scooter Braun. The Credits spoke with Schroeder about how she came to pen Hidden Figures, where she took creative license, and when her creative juices really start to flow. Edited interview excerpts follow.

What did your family history and personal experience with NASA and STEM bring to your writing of the script?

It was huge because just the atmosphere of NASA, the culture… I knew what those old machines looked like because I remember playing on them as a kid. They used to have a Mercury prototype on the lawns for the kids to play on, so I used to sit in the prototype and push all the buttons and think that I could be launched into space. I’ve been in the original Mission Control, I’ve been on a launch pad…there was just a certain inherent knowledge…and I have a background in math so I could understand sort of what they were working on, you know what [the character] Katherine [Johnson] had done in her calculations and all that, so I think it made it a lot less daunting and much more familiar.

So how did the project come to you?

[Producer] Donna Gigliotti had optioned the book proposal from Margot. We didn’t even have the book yet, and they were looking for a female writer for a few projects. And one of them they sent me was this proposal for Hidden Figures and I freaked out and I called them up and I was like, “Please you have to hire me for this!” And I was like, “I’m born to write this,” and I think [Donna] rolled her eyes and thought, “Ugh, Hollywood writer.” But then I told her all [about me and my family] and she’s like “Can you really handle the math and how would you depict it?” and I sort of pitched to her…Katherine Johnson will be running the numbers and we’ll cut to Glenn on the launch pad and we’ll cut to Mission Control and the timer’s going down and can she get the numbers, and Donna was like “I don’t understand the math but that’s exciting!” And so that’s sort of how I got the job.

How did Ted Melfi become involved?

[We were] working for about a year on drafts of the script and then last year we were really happy with it and sent it around town looking for a director, and that’s when Ted got a hold of it. He fell in love with the story. He sent it to Fox 2000 and, boom, that’s when everybody came on board.

I sent him an annotated script with everywhere that I had gotten the information from, so he could look at all the primary sources. And then he put his spin on it, his take on it.

One of the great things was that our budget increased when we went from being such a small film to Fox, and so it was really great because [Ted] could open it up a lot. Like when I was writing it, they were like, 'We can’t go in space! We don’t have the money to go in space!' [laughs] So I was using a lot of archival footage that you would see on TV, and it was great because when Ted and Fox came on you could cut from that archival footage and actually be with [the character of] John Glenn in space.

How close did you follow the book’s narrative? Did you take any creative license for the sake of the drama?

Yes, we did take creative license, but I was pretty married to the truth of their events. Katherine Johnson asked that it be not just about her but other women as well, because it’s a team. And it was very clear from the beginning that Dorothy Vaughn (played by Spencer), had seen the coming technology and knew that programming was the wave of the future for her girls. That was sort of always her arc. I gave her the mechanical ability where she could fix things, so that was a bit of creative license. And then with Mary Jackson, Janelle Monae’s character, I just thought the fact that she could petition the court and that her boss had actually really been the one pushing her to be in the engineering training program was amazing, so that became her storyline in the film.

And then for Katherine, it was all about what it was like for her to join the Space Task Group, dealing with the segregation and racism and sexism she faced, all leading up to this big John Glenn moment when he says, “Have the girl run the numbers,” which is true, he really did ask for that. But those were the storylines and really the artistic license came when compressing timelines and — you know, obviously I don’t know what they really did in their off time — so just creating the friendship between them and the comradeship and their home lives and all that.

There’s such a great balance in the film between their personal and professional lives. Also, there’s a lot of humor.

Yes, there is, and I think that that’s been really great for all the audiences. I love that parents are taking their children. Children are loving it as well, and I think it’s because there is a sense of humor to it. It never goes too dark. It stays close to the truth, it just makes it a film that everybody can enjoy and feel some hope from.

You mentioned that you worked with Margot and went to archival resources to write the script. Did you interview anybody else? Is Katherine still alive?

Yes, she is. She’s 98 and so she’s very fragile, so I would run my questions through Margot and then Margot would ask her for me. But Margot was amazing and she had been researching for like six years, so she gave me all of her primary sources. So I could read everything from graduate theses to housing surveys about the community they lived in to obituaries to interviews she had…and then also of course her book proposal. So she was incredible.

Were any of the lead actresses tied to the film before the script was written or completed?

Octavia Spencer met with Donna about the project…and then Donna sent her the script. And I got an email and it said Octavia loved it and couldn’t believe it was true. For a screenwriter — as someone who, you know, is very isolated, and I write on my sofa in my pajamas with my cats around me — I started squealing around the living room because suddenly it felt real.

Where and when do you typically write? Do you have any writing rituals?

I almost exclusively write in my home. I write predominantly at night. I normally start around 11 or midnight, so most of Hidden Figures was written in the wee hours of the morning… There’s something to me kind of magical about the middle of the night. There’s no one calling me, there’s no phone calls I need to make, there’s no errands I need to run. And sometimes I would write ‘til dawn and then crawl into bed.

What have you found are the greatest challenges and joys of adapting a story for film, particularly one that’s true?

I mean this one, as cheesy as it sounds, it felt more than just a movie to me. It felt like, oh my gosh, we’re doing a good thing here, like this really matters. It’s not just about entertaining an audience, but it’s about giving the spotlight to people that have been lost in history, so I felt a lot of responsibility, more so than if it were fictional. This was a huge responsibility I felt toward these women. It’s hard when you’re working with true events and real people because you want to do them justice, but you also have to fit it within a two-hour story. And so one of the hardest things is what do you leave out? So when you read Margot’s book, I mean it’s decades worth of stories, and so much of it is just incredible, ultimately, you have to let some things go and not include them and that’s one of the hardest things. I mean these women also worked on the mission to the moon. So I joke there needs to be a Hidden Figures 2 because there’s so much more of these ladies’ stories to tell.