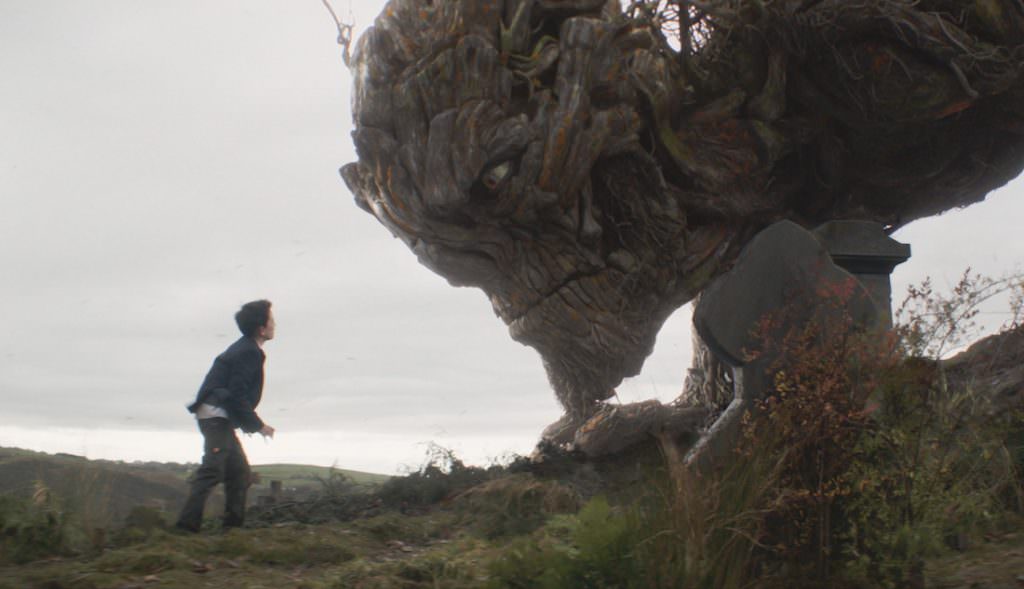 The Music of A Monster Calls Captures the Hope of Humanity

A Monster Calls is a simultaneously explosive and fragile tale that finds some of its most powerful moments in the quietest scenes. Celebrated composer Fernando Velázquez carefully molded the score to cradle audiences as the tender story unfolds. The film illustrates the imagination of a young boy coping with his mother’s illness, but Velázquez reveals how the story transcends the fairytale. “It’s a movie about why we do movies,” he explains. “We do movies because it’s a way of understanding the world and explaining the world to ourselves.”

The grown up fantasy film stars Felicity Jones, seen in blockbusters Inferno and Rogue One this year, Liam Neeson as the monster, and Pan’s Lewis MacDougall in a break out role. Velázquez praised the young actor saying, “More than anything Lewis, the kid, is just unbelievable. You wouldn’t believe you are watching an actor.”

The score opens with a soft and haunting piano melody accompanied by light strings that eventually spring to life and send the audience off to the journey ahead. Once the towering tree-like monster appears, the full orchestra awakens with jolting woodwinds, brass and percussion. “When the monster is presented for the first time, we did something ominous because the monster is big and threatening, but the music goes to a more psychological, mysterious place because the monster is not seen as a threat anymore,” Velázquez explains. “Then the threat is Conor’s monsters, his nightmares and his fears. These fears are too real and too powerful to have music.”

The score arguably climaxes in track “Break Things”, a short and athletic composition driven by passionate percussion. “There are a couple of moments with the music where I push hard, but it’s moments of anger more than thriller or horror,” Velázquez recalled. “There is a moment when Conor destroys everything and the music is destroying everything with him. It is very physical. And there is a moment when the monster attacks someone and the music gets really physical.”

The film is a delicate balance between a grim reality and an imaginative escape. The epic journey is something you have to experience to understand, Velázquez discovered while making the film. “It’s funny because I realized what we did after we did it. Sometimes movies are like history. You can only explain history once it happens. It sounds like I am not a good composer because we should have known the plan before we did the movie, but I realized what the plan was afterward.”

Knowing when to pull back can be just as important as the notes themselves, Velázquez attests. “They are speaking about really serious things between the kid and his mother and it felt awkward to be watching because it’s so honest and true. You feel like if you are watching a family talking. You don’t want to be there because it’s a little voyeurism. We discovered that when we put music at some points, a little music helped to bear it. You feel that you are listening to something that you shouldn’t be listening to.”

The more sweeping cinematic tracks are reserved for scenes featuring the movie’s monster, but eventually the fantasy and reality collide. “The music comes from the fantasy and the monster,” Velázquez explains. “Then there is a magic moment at the end of the film where it all comes together and it makes sense that the music steps into reality.”

Velázquez recorded the score with the renowned Basque National Orchestra and Orfeon Donostiarra choir from his native Basque Country of Spain. The choir’s vocals add an ethereal layer to the music. “You hear a choir, but you don’t hear people,” Velázquez says. “You hear humankind. There is a moment that is very special for us because they are talking about links between the mother and [Conor’s] father and the grandmother and the son where the strings are substituted by the choir. You wouldn’t realize that it’s something we did and that you’re listening to a choir. The piano is doing the melody and the choir is doing the accompaniment where it would usually be the opposite.”

When the movie finally came together, Velázquez recalls, he fully realized the true power of the score he had created. “In a way, the music is like humankind. It is a little bit like the stories that the monster is telling Conor. In a way, humankind is telling you, we all go through very difficult things and we help each other. The score itself is comforting Conor and the audience by saying, ‘You will be okay. This is going to be really hard, but it’s worth it. There is some hope in love and sharing and understanding.’”

A Monster Calls marks Velázquez’s third feature film with director J.A. Bayona. After composing the music for Guillermo del Toro produced horror films including Mama, Julia’s Eyes, and Bayona’s The Orphanage, the famed Mexican director requested Velázquez to score his own film Crimson Peak. “It was a wonderful wonderful movie with a great opportunity for me to do all these melodies I love to do. If you analyze, there is a lot of cello because it is my instrument and I love to do the cello. It was a great opportunity and I’m so glad that Guillermo helped me because it gave me a lot of visibility. Little by little people know my name and this is great because I get offers for wonderful projects.”

American audiences are beginning to associate Velázquez’s work with fantasy and horror, but in his native Spain, he says that isn’t the case. “If you lived in Spain, you would relate me with the most profitable Spanish movie ever [Ocho apellidos vascos] which was a very small comedy about the differences between Basque and the rest of Spain. It cost $1.5 million and made $65 million in the box office. It was a very light comedy which has nothing to do with The Orphanage or Mama or the dark things that you relate me to.”

Velázquez has two exciting projects on the way, but said it’s still difficult to overcome the language barrier among movie audiences. “There is a film that is going to be released in Spain in January called The Invisible Guest. The problem with these films is they are in Spanish. We are struggling to do films in Spanish that sell. We have our own culture and it’s great to share it. This movie is in Spanish and I think if it were American it would do great. I’m pretty sure they will buy the rights to do a remake or something.”

Coming to theaters in America later this year, Velázquez is working on Marrowbone starring Anya Taylor-Joy and Mia Goth. “I think it’s going to be quite a film and I’m happy because they want an orchestra and melodies, which is something that nowadays is priceless.”