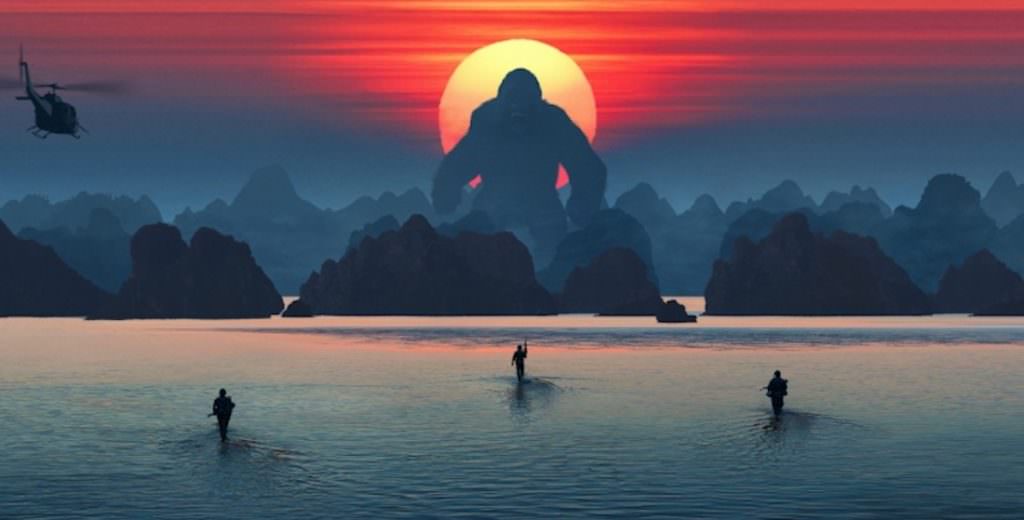 Four new Kong: Skull Island TV spots give us our most sustained glimpse of the king himself. Director Jordan Vogt-Roberts film boasts the largest, fiercest Kong ever put on screen, a fact that's made abundantly clear ten seconds into the first spot.

Skull Island follows a team of explorers, led by Colonel James Conrad (Tom Hiddleston) as they venture onto the primordial island to find a missing man and a mythical serum. What they find there is not only the colossal Kong, but also bloodthirsty beasts who live below ground, but feed upon anything that moves above it. We also learn that the first American military nuclear tests were not tests at all, but rather attempts to kill what was on Skull Island. This is a sly nod towards the nuclear subtext in that other legendary cinematic monster's backstory—Godzilla. Keep in mind Warner Bros. will be releasing a Kong v Godzilla in March of 2020.

The rest of the cast includes Samuel L. Jackson, Brie Larson, Jing Tian, Corey Hawkins, Jason Mitchell, John Ortiz, Shea Whigham and Toby Kebbell. What we've seen thus far is very encouraging, with Kong rendered as impressively as we've ever seen on film, and the rest of the island's mythical creatures holding their own on screen as well.

Have a longer look at Kong and one of the skull crawlers in this first spot.

On Skull Island, Kong is God, and a somewhat benevolent one at that. But when Conrad's team arrives on the island, they are bringing on God's wrath and essentially signing their own death warrants.

And no one is more adamant about reasserting that man is king than Samuel L. Jackson's Lieutenant Colonel Packard.

In the final spot, we see the alliances that form once the humans reach the island and find out what the real objective of the mission is. This spot shows what happens Kong's human friends reveal themselves. Naturally, one of them is Brie Larson's Weaver, playing a much tougher version of Ann Darrow, that woman who steals Kong's heart in previous Kong installments.