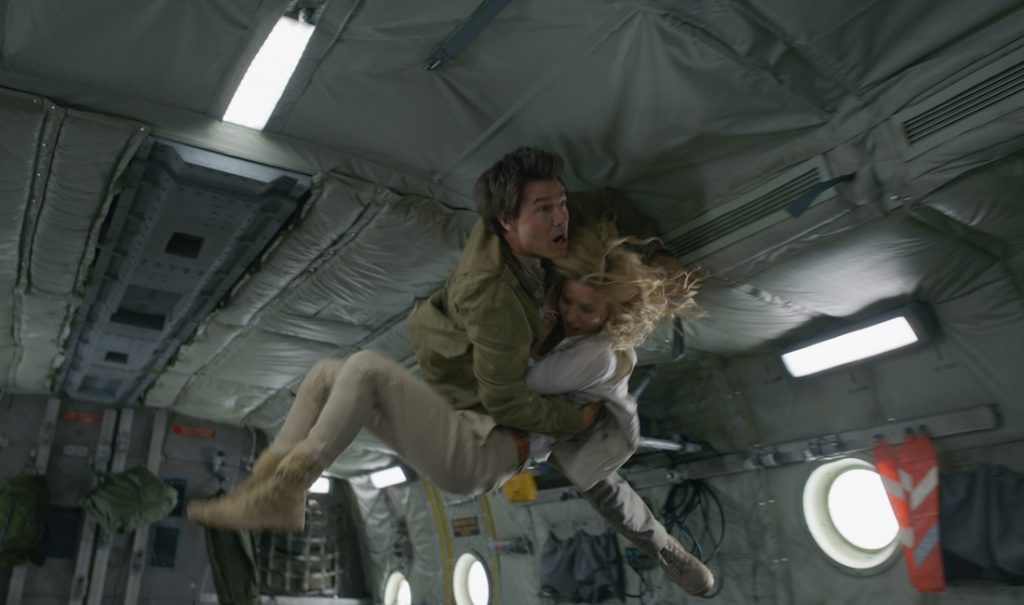 Tom Cruise’s Most Insane Stunt Yet: the Zero Gravity Scene in The Mummy

We've written about the insane dedication Tom Cruise has put in to accomplishing the most ambitious practical stunts, rivaling some of the work of the very best stunt performers. When we interviewed stunt coordinator Wade Eastwood about Cruise's work on Mission: Impossible—Rogue Nation, he talked about all the ways Cruise is consistently prepared and extremely hard working. What Cruise wants is to make the audience feel as if what they're watching is real, beacuse in many cases, it more or less is.

His most infamous stunts are the stuff of legend now. How about the time Cruise free-climbed the Burj Khalifa (the world’s tallest building)? Or what about when he gripped the outside of a transport plane—eight times—while it took off. Cruise has also hung from Utah’s jagged Dead Horse Point by his fingertips, made free-water dives of 130 ft., leaped from a Triumph Speed Triple motorcycle to tackle a co-star mid-flight, and dangled on the 800-ft. edge of Iceland’s Earl’s Peak for Oblivion. He's done more, we just want to get to his latest stunt.

In Universal's upcoming The Mummy, Cruise got to fulfill a career-long dream—to film a scene in zero gravity. The stunt turned out to be his biggest, most demanding achievement date. To capture one of the most terrifying plane crash sequences ever put to film, Cruise, his co-stars and the crew had to film it at an altitude of 20,000 feet.

First, behold the scene, and note that 90% of this was shot practically, as in, without the help of CGI in post production. These are real bodies tumbling around in zero gravity, smashing into stuff, under the guidance of an astronaut and using a state-of-the-art parabolic plane.

Universal has broken down the process for how they filmed that terrifying scene. Below, we've provided the most salient details:

Almost four miles above sea level, Cruise, co-star Annabelle Wallis and key crew—all under the eye of The Mummy director/producer Alex Kurtzman—lensed a sequence that is impossible to shoot on land.

Off the coast of France near Bordeaux—over two days and multiple flights—pilots and astronauts of Novespace Airbus (A-310) took the company 20,000 ft. high. From this altitude, they climbed rapidly to a 50-degree angle to just over 25,000 feet; there, the plane reduced thrust, and free fell from the sky.

For 22-23 seconds during the ballistic phase, the company felt weightless. As the Airbus free fell, cast and crew balanced dialogue, camerawork and choreography for a crucial plane-crash scene that will appear in the film.

For the stunt, the pilots enacted a total of 60 parabolas (repeated weightlessness sessions).  Each parabola allowed for the filming of a key sequence in the scene. At least 90% of the plane crash sequence is practical. The only visual effects will be added in post-production and blend sets together so they look the same size and scale.

The “pull-up” phase starts at full thrust and max speed from level flight until a 50-degree incline, before the “injection” phase and beginning of weightless (actual freefall, not floating).
During “pull up,” those aboard feel twice their weight on Earth.

The aircraft is briefly injected into orbit, following an elliptical trajectory above the Earth, so passengers live the true weightlessness that astronauts feel.

This, folks, is how you make a plane-crash sequence that feels real. And while many of Cruise's most terrifying stunts have been solo acts, here he shares the scene with his co-stars and the crew, who were on the plane with him.