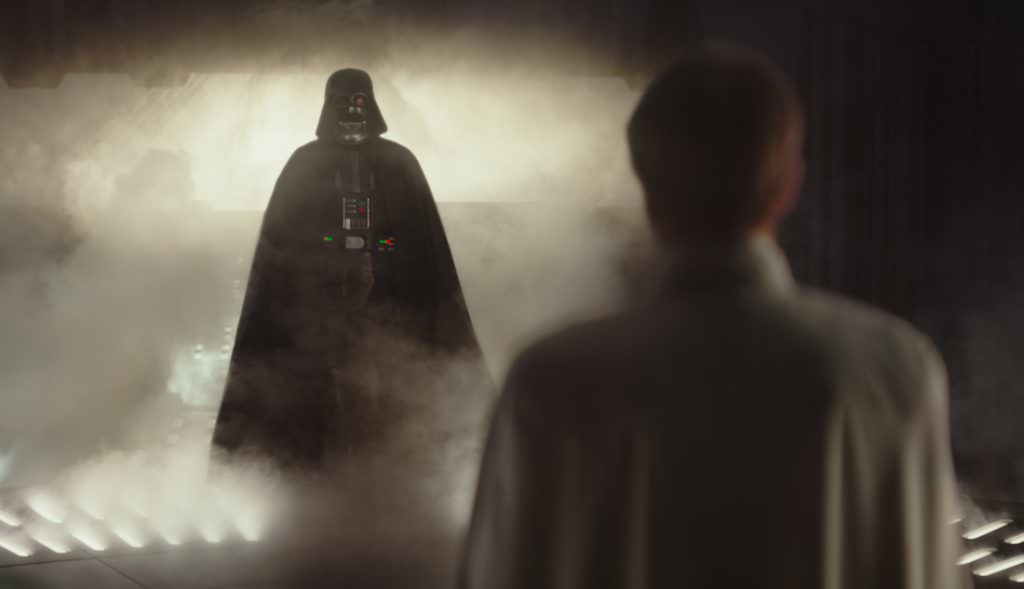 The first anthology film in the Star Wars saga, Rogue One: A Star Wars Story hit theaters this past weekend to positive reactions from audiences and critics alike, and, as was expected, record breaking box office numbers. As Variety reports, the film's massive weekend "shatters any doubts that the world of Jedi knights, shadowy totalitarian governments, and bug-eyed aliens is much bigger than the saga of the Skywalker clan." Direct Gareth Edwards film, the first to move outside of the drama of the Skywalkers and their galaxy-shaping conflict, debuted to a colossal $155 million domestically this weekend, making nearly $300 million globally. It did this brisk business without relying on characters central to the ongoing Star Wars franchise (no Leia, no Luke, no Han—but yes, Darth), with and a higher mortality rate for central characters. And not only has Rogue One been a commerical success; critically, it's rating well, too. On Rotten Tomatoes, it currently holds an 89% audience score and an 85% “fresh” score from the critics.

“As always, a Star Wars movie lives or dies depending on how much we give a damn or don't about the characters,” concludes Peter Travers in the Rolling Stone review.

“But with the smashing Jones giving us a female warrior to rank with the great ones and a cast that knows how to keep it real even in a sci-fi fantasy, Rogue One proves itself a Star Wars story worth telling. It's hard not to get choked up with that blind monk when he chants, "I'm with the Force and the Force is with me." Who'd want it any other way?”

“The movie races forward with little variety in pace,” said Ty Burr concerning the screenplay in his review in The Boston Globe. “Yet you generally feel you’re in good hands.”

“At a certain point, though, the greater “Star Wars” narrative comes back to claim this movie with a vengeance, and as the biggest puzzle piece clicks into place, the hairs on the back of your neck may rise.”

NPR was mixed. “At least it's a cool space battle,” wrote Chris Klimek.

“But at most, it's a cool space battle.

What it doesn't have, what it can't possibly have, is the mythic quality of the franchise's best entries. That's because it's a filling in of blanks, a detail picture. And detail is the enemy of myth.”

Buzzfeed is looking towards the future. “Even when they’re getting inadvertently diminished by their own franchise, though, there’s a deliberateness to Jyn and her comrades that feels like it could make a lasting mark on the Star Wars brand,” writes Alison Willmore.

“They’re a band of women and people of color, a choice that’s echoed, to a lesser extent, in the array of characters we see at the Alliance base, with droids and non-humans scattered in. The Rebellion, in Rogue One, is dominated by the marginalized in a way that’s specific, and that provides a particular foundation in its fight for freedom — broad and generic no longer. It’s a quiet touch, but it’s unmissable — you might even call it political.”