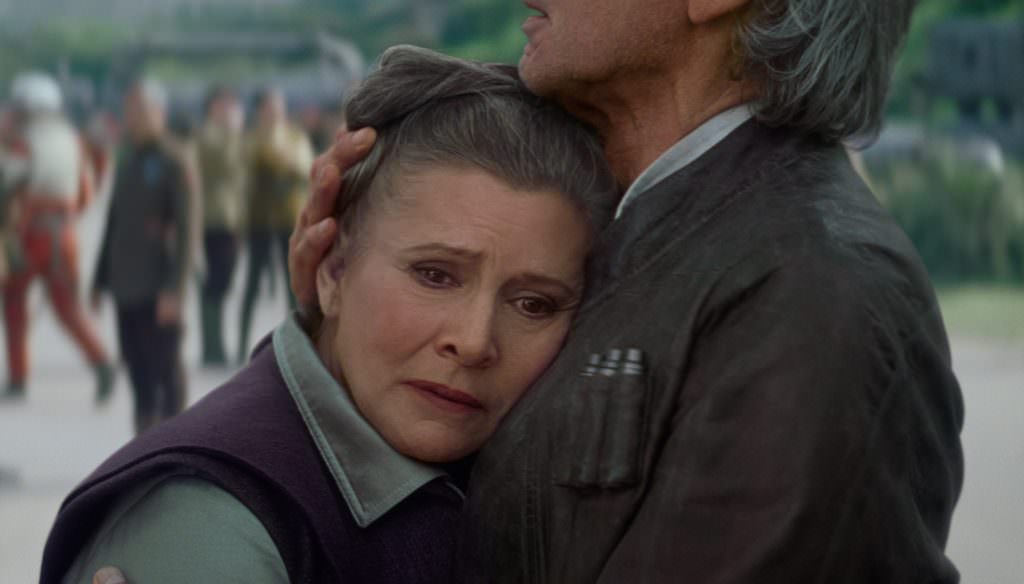 To a generation that came of age in the ‘70s and ‘80s, she will forever be Princess Leia of the Star Wars films, with her iconic buns-like-headphones hairdo, wielding a blaster as she leads the rebellion against the Galactic Empire. To another, slightly older demographic, Carrie Fisher was synonymous with one of the last great Hollywood scandals. The daughter of actress Debbie Reynolds and pop star Eddie Fisher, Carrie Fisher became tabloid fodder at age three when her father left Reynolds to marry Elizabeth Taylor in 1959 at the height of Taylor’s fame. Both roles would define Fisher for much of her life, proving to be the proverbial blessing and curse.

An author, screenwriter and actress, Fisher died December 27 in Los Angeles at age 60. She’d been hospitalized in intensive care ever since suffering a heart attack on a flight from London to Los Angeles on December 23.

Born October 21, 1956 in Beverly Hills, Fisher was 21 when Star Wars was released in 1977, immediately turning her into an international movie star. She was already on pace for a show business career. She’d appeared at age 15 on Broadway in the musical Irene which starred Reynolds. She was also featured in her mother’s Las Vegas nightclub act. In 1975, Fisher made her film debut at age 17 in Hal Ashby’s Shampoo as the daughter of a rich woman played by Lee Grant who is having an affair with her hairdresser (Warren Beatty).

But it was Star Wars, which quickly became a box office bonanza and cultural phenomenon, that launched Fisher into the celebrity stratosphere creating an uneasy state for the actress for the rest of her life. Her Princess Leia likeness appeared on every bit of merchandise from action figures to life-sized dolls coveted by collectors, a surreal reality that she often noted with her characteristic irony. Fisher continued to enjoy the rewards of the blockbuster franchise as she appeared in all four Star Wars sequels including The Force Awakens in 2015 and Episode VIII set to be released in 2017.

Over her more than 50-year career, Fisher appeared in numerous films, from The Blues Brothers (1980) to a memorable supporting turn in When Harry Met Sally (1989), and television series including Weeds, 30 Rock and Entourage. But it was by trading on her personal notoriety that Fisher managed to stay in the pop culture spotlight, even playing satirical versions of herself in movies like Maps to the Stars (2014) and on shows like Sex and the City and The Big Bang Theory.

After a role in Woody Allen’s Hannah and Her Sisters (1985), Fisher suffered a nearly fatal drug overdose. Her stint in a 30-day rehab program in Los Angeles became the basis for her autobiographical comic novel "Postcards from the Edge." It was a bestseller, earning Fisher the Los Angeles Pen Award for Best First Novel. Fisher adapted her book into the screenplay for 1990’s Postcards from the Edge directed by Mike Nichols and starring Meryl Streep as Suzanne, the Fisher character, and Shirley MacLaine as the alcoholic movie-star mother clearly modeled on Reynolds.

She continued to be candid in her books and in interviews about her personal ups and downs including her struggles with substance abuse and her short, failed marriage to singer Paul Simon. Fisher channeled her tart observations of her own life into her critically-acclaimed one-woman show, Wishful Drinking, which ran on Broadway in 2009 before touring other cities. HBO turned the show into a documentary in 2010 and Fisher revamped it into a memoir which earned her a Grammy award nomination in 2009 for Best Spoken Word Album.

In the show, Fisher took audiences on a darkly comical tour of her life, poking fun at her celebrity parents and her enduring role as the forever-young Princess Leia, no easy doppelgänger for an aging actress. She was candid about the perils of celebrity as she discussed not just her battles with addiction but also her bipolar disorder and revealed that she voluntarily underwent electroshock therapy.

As Hollywood royalty and a veteran actress, Fisher was a welcome presence on Turner Classic Movies where she engaged in conversations with host Robert Osborne for the regular feature The Essentials. She was also known within the industry as an uncredited “script doctor” for numerous films released during the ‘90s and early 2000s.

In 2016, Fisher again made news when she released the memoir "The Princess Diarist," based on diaries she kept while filming the original Star Wars trilogy. Fisher claimed that she had an affair with the married and considerably older Harrison Ford during the shooting of Star Wars in 1976.

It was just the latest example of the candor about her own demons and skeletons that fans had come to expect from Fisher. In Wishful Drinking, Fisher noted, with her trademark self-deprecating wit, “You know what's funny about death? I mean other than absolutely nothing at all? You'd think we could remember finding out we weren't immortal. Sometimes I see children sobbing airports and I think, ‘Aww. They've just been told.’”