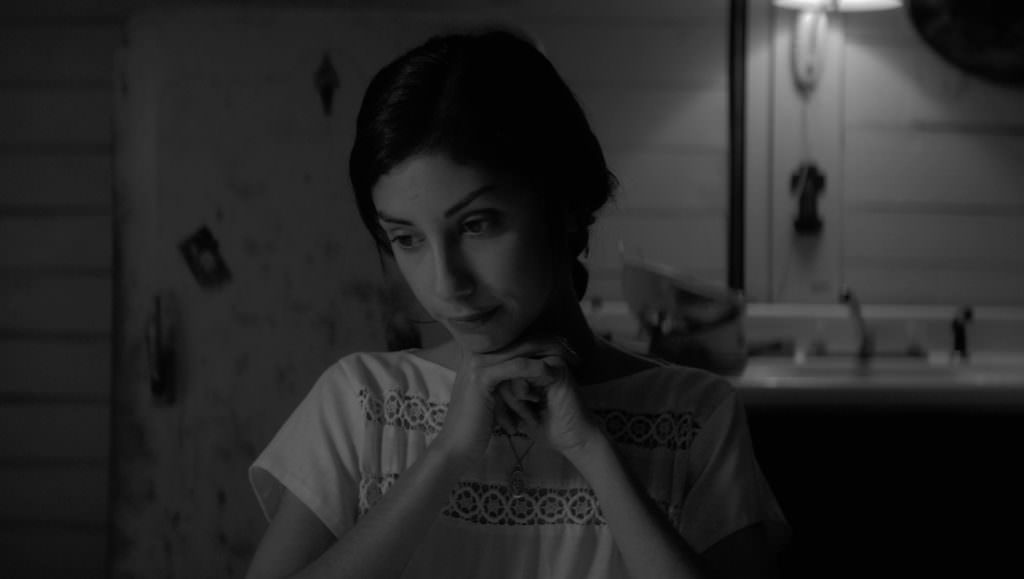 Though not always so kind to the women it relies on, the horror genre has long established a multitude of tropes around its female characters, the most famous of which is an integral part of the stalk-and-slash formula: the Final Girl. Often characterized by her placid “innocence,” the Final Girl is often clear-headed, practically minded, brunette, and (most importantly) virginal. But The Eyes of My Mother, the directorial debut from Nicolas Pesce, happily combines stylistic hallmarks of genre standbys with a plot that feels strikingly like American Psycho meets Repulsion, albeit with an uncommon presence of heart-wrenching empathy.

Violent in suggestion rather than in splatter, The Eyes of My Mother tracks the slow mental degradation of a young woman, Francisca, after a serious trauma in childhood sends her world spiraling out into chaos and brutality and eventually drives her to trace a pattern of increasingly cruel and grisly acts inside her inconspicuous rural home. Relative newcomer Kika Magalhaes stars as Francisca, giving a gorgeously mannered and understated performance as a young woman who is piteously innocent in one turn and relentlessly brutal in the next.

Magalhaes manages to masterfully reverse the Final Girl trope by embodying all of her qualities only to defy them, committing repetitious acts of atrocity all in the name of “doing the right thing,” making The Eyes of My Mother both one of the most relentless horror films of the year and one of the most emotionally complex.

“I think my approach to the character, I never saw her as a dark person. I think this is also a message from the movie, which is great,” Magalhaes told me over the phone. “We’re very quick to judge people who do horrific things, but we don’t know what makes people do that, you know? I don’t think Francisca is a monster, I think she’s a victim of everything that happened to her in her life and all the horrible things that happened to her.”

Over the course of The Eyes of My Mother, we witness Francisca evolve from non-violent child to a young woman whose never ruffled countenance allows her to remove a victim’s eyes and stick them back up with the absent-mindedness of darning a sock.

“She committed all these horrific things, the actress continued, “but I don’t think she knew she was doing horrific things, I think she thought she was doing good. She kept that guy in the barn thinking that she was taking care of him, she was feeding him and spending time with him. She loved doing that, and in her mind she thought he loved it too. She thought she was doing a good thing. When she took his eyes, it was all from love, so he wouldn’t feel pain anymore. She didn’t know how to express her love somehow. Seeking connection that she never had.”

No doubt a character so deeply disturbed must be hard to connect to, never mind imbue with the kind of sympathy that Magalhaes executes, but the young actor was able to mine surprising personal experience to connect her to the mania.

“When I was first involved with the script – you know, I’m from Portugal, I moved to become an actress. And this was a recent thing, the move. And it’s not an easy thing. Being an actor, the journey itself wasn’t the easiest one and I guess every actor goes through their little journey and I was going through mine. So I was having a real hard time at that moment. I was feeling very lonely being far away from my family and not knowing anyone in America. I guess that all of this was like a sign and a preparation itself for the character.”

Magalhaes wasn’t a huge horror fan before she connected with Pesce for the role, but you can bet the NYU grad had plenty of film research to pass along. “Nick was great and we’d talk for hours and we would discuss the character and the movie and exchange ideas. And he told me to watch a lot of horror movies like Audition, Under the Skin, a lot of Hitchcock and Lars Von Trier. I did a lot of research on serial killers like the Manson case, and Ed Gein was a big time for me because he had a mother thing. That was interesting and kind of disturbing to me too.”

Though American himself, Pesce worked to weave Magalhaes’ Portuguese culture into the film, steeping Francisca’s relationship with her mother in cultural identity. “I did bring a lot about my culture to the movie. I got involved in the project a year before we started shooting, so I was very involved with everything that was going on, like I read all the drafts. If there was any new development, Nick would call me and we’d talk about it and I would tell him what I thought. We would just discuss and he was very open-minded about taking my input. I had a chance to bring a lot of my own self and my own culture to the movie. I was really happy to do that.”

Adding to Pesce’s dark vision is the film’s absolutely striking black-and-white cinematography, something Magalhaes found incredibly helpful to the film’s overarching message. “I think black-and-white is the perfect thing for this movie, I couldn’t imagine this movie in colors. And I think the black-and-white is almost another character in the movie somehow because it reflects her mood and her life. Her life is really sad, it has no color.”

Magalhaes was happy to reclaim her identity in the genre as a dangerous killer (rather than a virtuous punching bag), but she no doubt had to go incredibly dark to prepare for the role. “I think that as an actor, I kind of used my own experience to get to that point, But it was, I think that the darkest part of this movie was the preparation itself because I was in a dark place.”

Luckily, Pesce and the rest of the cast and crew kept things light on set despite the dark subject matter, so much so that Magalhaes didn’t quite register the jarring darkness of the film’s breathtaking opening scene until after she saw the film cut together. “When I saw the film for the first time, but the first five minutes, I was like, ‘Oh my god! You guys are crazy!’ Because it’s so intense.”

Despite its daring brutality, there’s much of The Eyes of My Mother that seems a brave reclamation of character identity, presenting the horror genre with one of the most complex female narratives of the last decade. Speaking on Francisca’s intricate path, Magalhaes offered her thoughts on the film’s bleak end: “I absolutely think that the movie reflects the cyclical nature of life. The ending is kind of the beginning, as it passes through generations.”

Click here to see how you can watch The Eyes of My Mother.