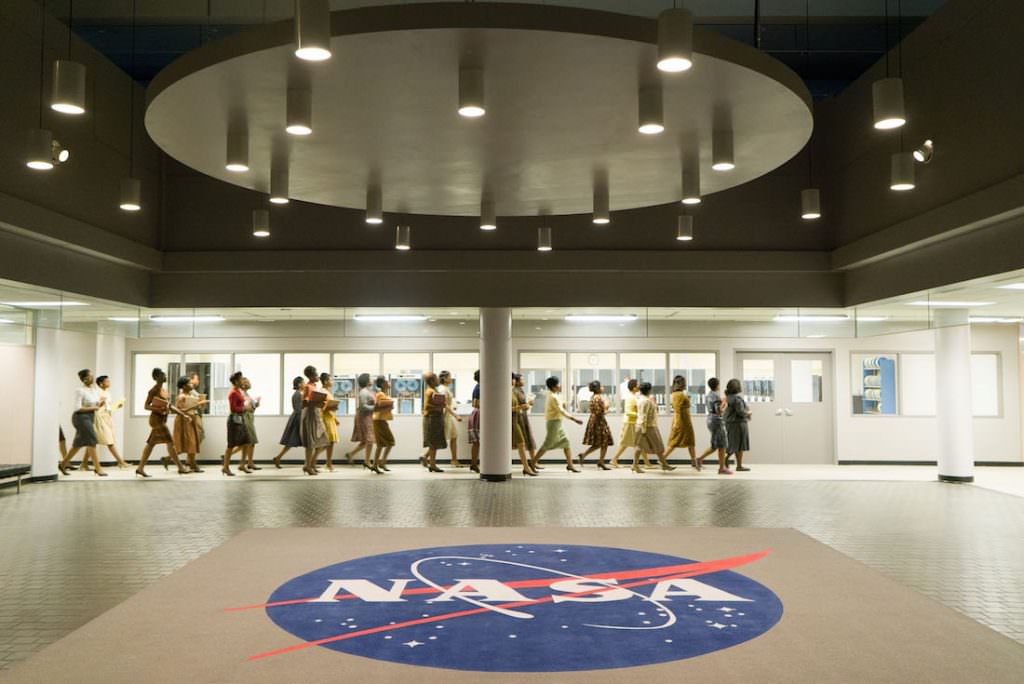 Hidden Figures tells a quintessentially American story—a true story, no less—that has gone more or less untold until now. The film, based on Margot Lee Shetterly's book of the same name, tells the true story of three brilliant African-American women who helped NASA change the course of the Space Race between America and the Soviet Union. Those women were Katherine Johnson (Taraji P. Henson), Dorothy Vaughan (Octavia Spencer) and Mary Jackson (Janelle Monáe), they served as the brains behind one of the greatest operations in history: the launch of astronaut John Glenn (Glen Powell) into orbit, a astonishing achievement that helped restore the nation's confidence and tilted the race with the Soviet Union in America's favor.

We've been steadily speaking to the artists who helped craft this crucial film, including cinematographer Mandy Walker and costume designer Renee Ehrlich Kalfus. The gorgeous, vintage clothes and the ace lensing work all relied another collaborator, production designer Wynn Thomas, to give the film it's perfectly period look. Thomas has had a long and distinguished career, working with directors like Spike Lee, Robert De Niro, Tim Burton, Ron Howard, and now Thedore Melfi. With Lee, Thomas has worked on eight of his films.

"Well the thing I remember most about working on those movies with Spike was it was very much like working with a family," Thomas says. "Every year it was the same group of peope that worked on the same film with him. Every year that family gathered—Ruth Carter, Rob Reed, Ernest Dickerson—and Spike is not very warm and fuzzy [laughs], but the people he surrounded himself with were really quite lovely people. The thing I remember about that time was it was wonderful to get together every single year like clockwork and make another movie." 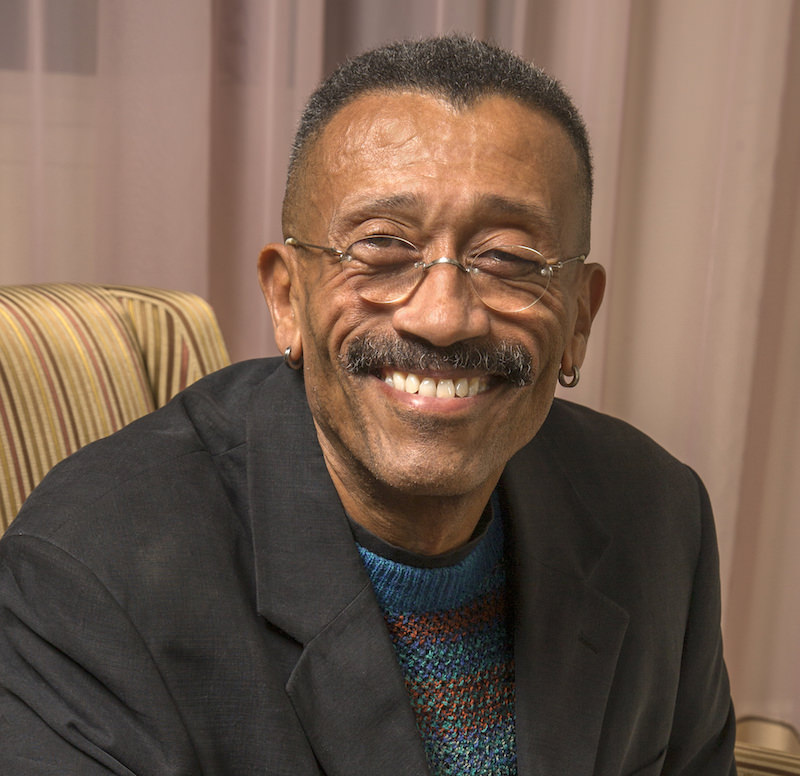 Working on Hidden Figures provided Thomas with the challenge of capturing an era, while still making sure he was telling the specific story of the script. It's never enough to simply accurately depict a certain decade or region.

Considering a lot of the film takes place in NASA facilities, that meant poring over research of what those spaces looked like, and deciding how closely he and his team needed to hew to reality, and when to make changes to better tell their story.

"I did a lot of research, and there was a ton of stuff about NASA,. Ironically, 20th Century Fox still has a great research library. Every studio used to have them, but they’ve all sort of gone away, but 20th Century Fox kept theirs, and they put together a series of binders about that time period and about NASA and the facility in Langley, Virginia. So that was very helpful on this particular project. The other challenge was really designing 1960s Hampton, Virginia. So I spent a lot of time trying to find photographs and research of that city from that particular time period."

Part of Thomas's job is to imagine these characters lives within this specific time period, a process of interpretation and time travel, in a way.

"I try and get a sense how these folks would live in that time period, then I allow myself to interpret that the script."

The productin designer is usually one of the first people hired on a film. This is because nothing can happen until their work designing the world has begun.

"From day one, I’m in the hot seat, because the bulk of my work happens in pre-production," Thomas says. "You can’t make the movie unless all the locations are chosen, unless you get a sense of what kind of sets are going to be designed or needed, and those eight to twelve weeks of pre-production are used to determine not only what the film will look like, but whether or not you’ll be shooting certain sets on location, build them on stages, etcetera. Once the camera starts rolling, there’s very little I don’t know. There may be a few sets I haven’t desgined, but we know where all the locations will be and how we’re approaching each set. Those decisions have to be met because every other department is affected by those decisions." 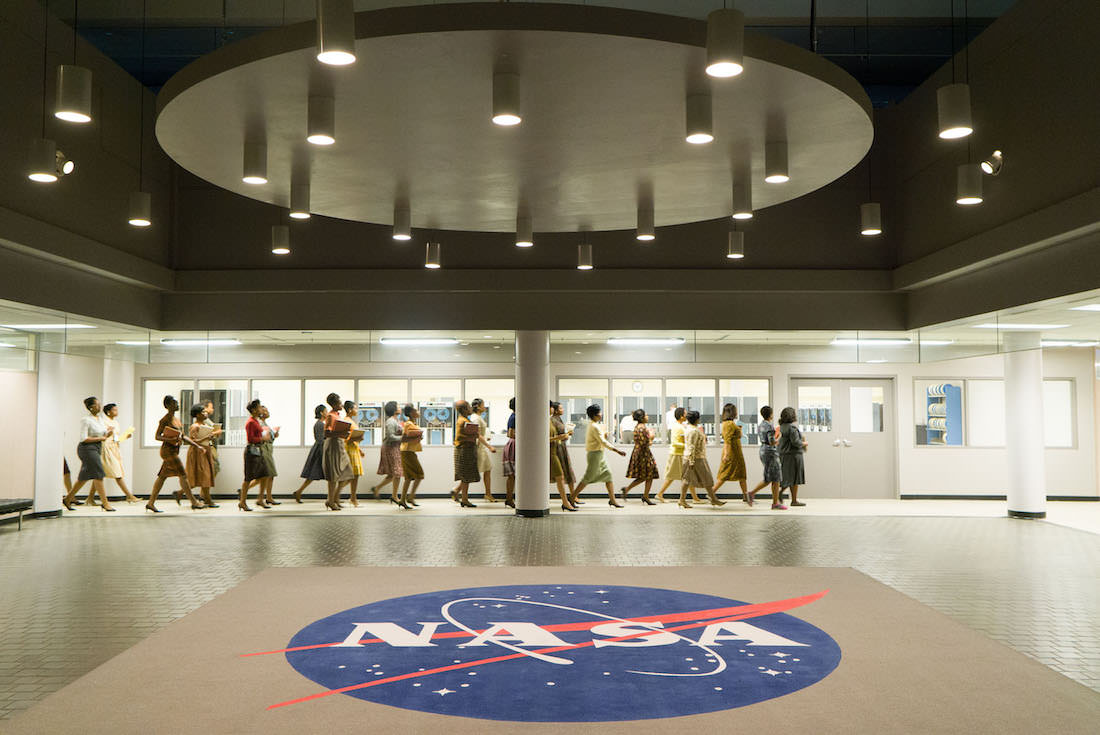 One of those most important sets in Hidden Figures is the Space Task Group, where much of the action takes place. For this set, Thomas and his team decided to move away from how it actually looked.

"This is the place where Katherine Johnson comes to work to solve problems to figure out how to get John Glenn into space," Thomas says. "This was the place wehre all the top scientists were doing their work to get the astronauts in space. In reality, NASA’s campus itself was fairly boring, these 1940s and 50s two story, red brick buildings with cinderblock walls. Instead, I designed a room that was a circular space. Because first of all, it was a lot more interesting to do, but second, what happened for me was as I was scouting exterior locations, we were trying to find a location in Atlanta to use as exterior for NASA’s campus. We chose a location at Morehouse College. On that campus there was a building that was circular, a very interesting structure, amongst all these rectangular buildings. I kind of used the shape of the building as an inspiration for the interior for the Space task Group, by making that space circular, it became a much more interesting space to design, and provided a more interesting space for the audience to look at over the course of the film."

"When I design a film, I want the audience to feel what the characters are feeling. By designing the Space Task Group circular, it’s a little bit more wondrous in many ways. When Katherine Johnson enters that space for the very first time, my hope is that the viewer is experiencing the same sense of wonder that she is."

Like so many artists who collaborate to make a single film, much of what Thomas does gets to a viewer on a subliminal level. You're eyes and ears are drinking in all this data in a given frame, and the way each shot is framed, the way the set is built, the way the score does (or does not) insinuate itself, all of this creates a mood or feeling in the viewer without them being consciosuly aware of it.

"By making the Space Task Group circular, from a conceptual point of view, circles are very interesting, especially when you’re doing a movie about astronauts in space," Thomas says. "The thing that anchors the room is a glass globe, the astronauts are traveling around space,  so circles become a metaphor for creativity, for discovery, for change, and I think the audience can sense that. They may not know exactly what they’re looking at, but when they see the space the first time, they think there’s something special happening here."

"It’s a wonderful tribute to him. His character, who he was as a person, not only do we go on the journey with him into space, but in the story he is one of the astronauts who crosses the aisle and who reaches out to the black women in the film. I think that was true of the John Glenn from that time period. He was a person who crossed boundaries, and known to be a very good man. The movie pays tribute to his humanity." 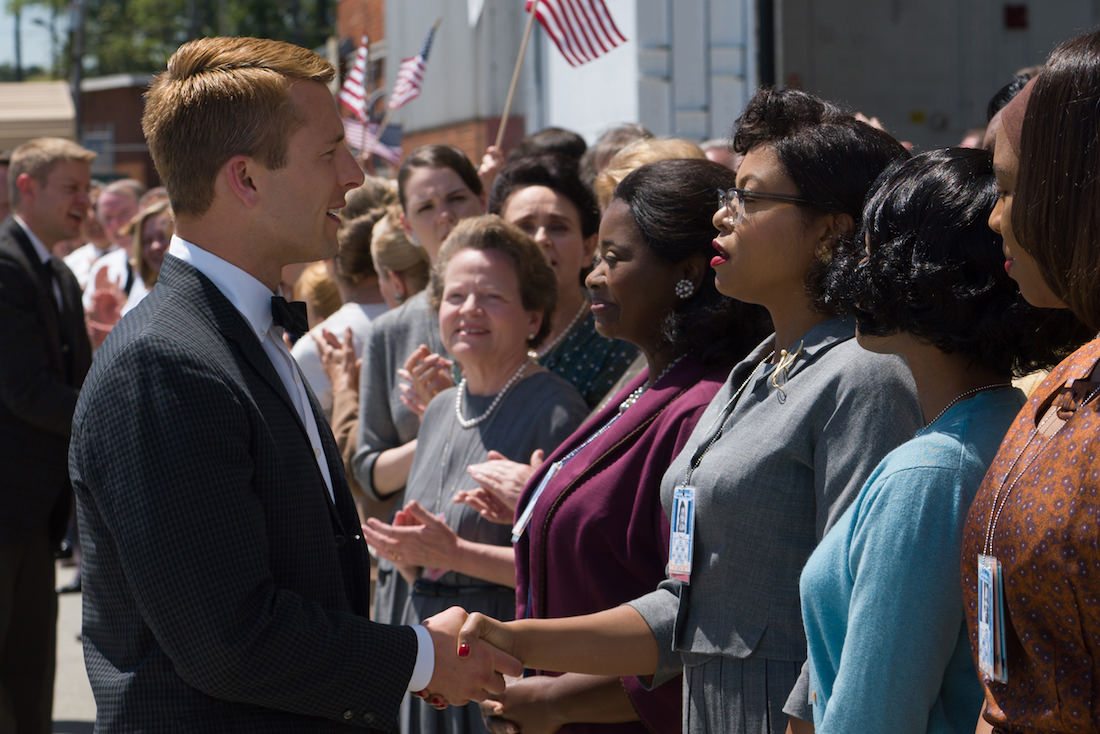 "Working on Hidden Figures was a pleasure to work on, because I had such a great director, one who was willing and very comfortable with letting me do the work. Each job will present you with a certain amount of technical problems, but the great thing of having worked for so many years, they don’t intimidate me anymore, it’s about finding a solution for the problem. It’s very rare something frightens me these days. Designing a film is still a very joyful discovery process. When I was a young designer, I used to try and solve everything before I started the job. Now, I’m more open to the possibilities I hadn’t anticipated, to discovery. That’s the advantage of having had all this experienced. I’m freer today than I was thirty years ago. Experience allows you freedom for accidents, for more spontaneity to occur. It’s absolutely true. This is a youth oriented business, but the great thing about being older is it’s really liberating."

Working on Hidden Figures also gave Thomas a sense of being a part of a filmmaking team that was telling a story that needed to be told. One that was, in fact, long overdue.

"Every single person was committed to telling this story, and working really hard in each of their roles to make sure they were supporting the story in every way possible. Our director was our leader, and he really set a wonderful tone on the set, and was very open to suggestions and collaboration. Also, as a black filmmaker, we don’t get to tell our stories this way too frequently, and it was really wonderful telling this story which no one knew about, and bringing these women to life. It was an honor to work on this film."