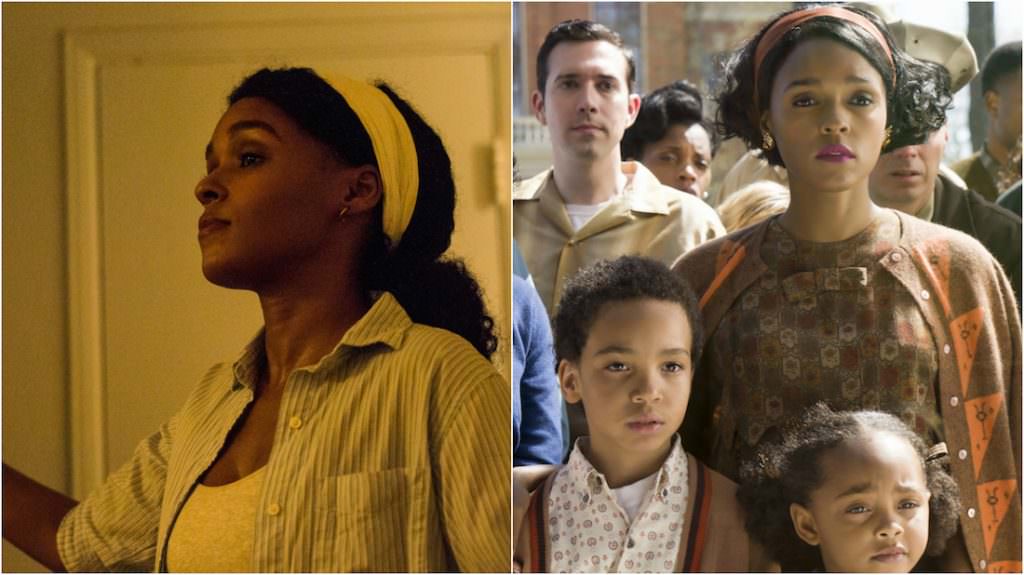 The multi-talented Janelle Monáe is having one of the most remarkable starts to a film career in recent memory. The iconic musician has moved into acting with two roles in films that will likely vie for Oscars, and her performances in both have been earning plaudits from critics far and wide.

As Teresa in Barry Jenkins' remarkable Moonlight, the story of a young man name Chiron's struggle to find himself, and confront his sexuality, and which is told across three defining chapters in his life. The film is gorgeous, and Monáe is in such clear possession of the character you'd be excused for thinking you were witnessing a seasoned actress in the role of a lifetime. Teresa gets involved in Chiron's life when he's just a boy and is called Little (Alex Hibbert), and who is shepherded to her home by her Cuban American boyfriend, Juan (a fantastic Mahershala Ali). In one astonishing scene, Little finally opens up to his would-be protectors, revealing what life is like with his crack-addicted mother (Naomie Harris), and more specifically, the word she uses to describe him. Little wants to know what the word means, and if it accurately describes him. To tell you anything more would be to drain the mesmerizing potency of the moment (in case you haven't yet seen the film), but the thing to watch out for is Monáe's perfectly timed expression, which wordlessly intuits to Juan how to handle this incredibly delicate moment.

"Teresa reminded me of real people in my life," Monáe told me over the phone from Los Angeles. "She reminded me of cousins, aunts ,the nurtuers, the listeners, the light in the darkness of the ghettos. I always go into any situation trying to find real experiences I can pull from to help inform my art."

Teresa remains a constant in Chrion's adolescent life (he's inhabited by three different, remarkable actors over three stages—Hibbert, Ashton Sanders and Trevante Rhodes), providing him both a warm bed and a hot meal when he needs it, and, a spirit of acceptance for the totality of what he is—a young, gay black man. Everytime she's on screen, you feel like you can breathe again because you know as long as she's there, he's going to be okay.

For her next role, Monáe pivoted to tackle playing a real person, never an easy task. She stars as Mary Jackson, the third lead mathematician in Hidden Figures, Theodore Melfi's film about the three African American women, Katherine Johnson (Taraji P. Henson), Dorothy Vaughan (Octavia Spencer) and Jackson who were the brains behind one of the most difficult, dangerous missions in American history; launching astronaut John Glenn (Glen Powell) into orbit. The success of the mission, thanks to these three women, came at a time when the country was reeling from the Soviet's successful launch of Sputnik, completely turning aroundthe Space Race and galvanizing the country.

"I was maybe a bit more worried about making sure Mary Jackson's family would be proud of my work, and that I would represent her to the best of my ability. It was such an unbelievable accomplishment. This was the segregation era, they were the victims of racism and sexism and misogyny, and the laws didn’t even protect them from that. For me, I wanted to make sure that this woman who achieved such extraordinary things during a time when her brothers and sisters were being murdered and hung and lynched and hosed down, that I could make her the hero."

While researching the role, Monáe spoke to the author of "Hidden Figures" Margot Lee Shetterly, the book the film was based on. Through Shetterly, Monáe got to speak to Mary Jackson's father.

"He told me how much of a nurterer she was to the young women and minorities at NASA," she says. "Mary showed them the ropes, showed them around. She was a very giving woman, so much so that after the she became the first African American engeinner, she decided she wanted to take a pay cut and work in HR to help other women."

Monáe was stunned when she got the script, as many people have been after seeing the film. Stunned that this incredible part of American history was more or less invisible to the majority of the public.

"Firt of all, when I read this script, I was blown away. I thought, wow, finally African American women were not just going to be maids or any of the stereotypical characters we see. The film was going to finally be honing in on the brilliance of these women."

The script, by Melfi and Allison Schroeder, spoke to something Monáe said was crucial to see in a film of this scale—the totality of the African American woman.

"The script shows we’re not all monolithic, we’re complex and nuanced. Then when I found out it was indeed non fiction, and were based on real women and real events, I became upset because I had no clue about these women. My teachers never taught me about these women working at NASA during this era. So it became a personal responsibility to me that no other young girl went through life without knowing who these women were. It was personal obligation to honor these women who went uncelebrated for far too long. Every day on set I’d pray on set and ask God for me to allow Mary Jackson’s essence and spirit and show up."

The comraderie between Jackson, Katherine Johnson and Dorothy Vaughn in real life was replicated on the set of the film.

"I had so much fun with Taraji and Octavia, the sisterhood you will see on the screen is real. We hung out,  laughed and cried together, Taraji would cook for us. We understood the history of sisterhood in a real way, the way these women leaned on each other during such difficult times, and I don’t think they would have accomplished so much without each other."

Monáe likes what she sees the film is already doing, sparking a conversation about the importance of getting young African American women, and women in general, motivated about the sciences.

"There’s a huge push to get girls into STEM (science, technology, engineering and medicine), making sure that young girls have these women as the new superheroes and go into that career field and nurture it. It’s so important to show these young girls and re-define these spaces for them."

Monáe's ease on screen is not all that surprising to her—she studied acting when she was growing up.

"I was a drama kid growing up, I’m a writer as well. I love great stories. I’ve never considered myself just a musician, I want to tell universal stories in unforgettable ways."

For her first two films, Monáe has chosen stories that speak directly to the universal experience, stories that speak to the power of people coming together, and what's possible for any human being when they're supported and loved, whether it's by just a few people in Miami or by their peers at their work. In Moonlight and Hidden Figures, Monáe has started her film career telling stories we need to hear.

"We have these two important special stories that are giving a voice to the other, that person who’s discriminated against. Some young girl or boy is going to walk into that theater, and maybe they won’t feel so alone, they’re just as qualified as any other human being on this earth. To strive for the pursuit of happiness and be accepted in whatever field they choose. I pray that people will highlight these films and hopefully they encourage more people in Hollywood to tell these types of stories. Inclusion is important to me, and including more diverse stories and nuanced characters will be important, showing fresh faces and telling fresh stories. I’m thankful to be apart of something bigger than myself—this about making sure this world feels inclusive to the next generation."