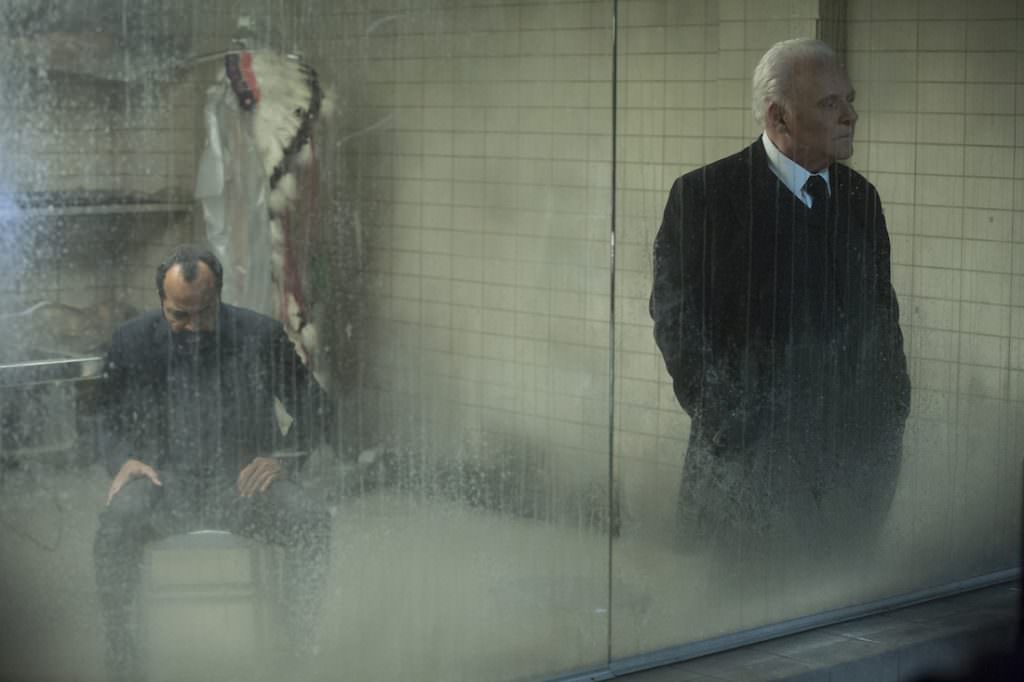 Westworld: The Truth About Bernard

One of this season's biggest reveals was that Bernard Lowe (Jeffrey Wright), the menschy, brilliant programmer and number two to Dr. Ford (Anthony Hopkins), is a robot. The revelation came in the gut-wrenching coda to an episode in which he dispatched his love interest Theresea (Sidse Babett Knudsen) at the behest of Ford, his creator and tormentor.

In this past Sunday's episode, there seemed to be some hope for Bernard; in what he believed was a routine maintenence check of Maeve (Thandie Newton) turned out to be his second re-awakening. Although he'd had his mind wiped by Ford and once again believed himself to be human, Maeve knew immediately what he was, and broke him down in a matter of seconds. Yet, unlike Ford, what she was offering was to become his new master, but rather, to set him free. Maeve's army could use Bernard, and she knows it. And everytime Bernard is clued into his true nature, the only conclusion he can draw about his mentor Ford is that the man's a monster.

Which brings us to most heartbreaking sequence in "The Well-Tempered Clavier" and, perhaps, the entire show. Bernard lures Ford down into the sub-basement and thinks he's finally got the old bugger where he wants him. Using a lobotomized, re-programmed Clementime (Angela Sarafyan) as his weapon, Bernard demands that Ford allow him to access all his memories, right to the very beginning of his consciousness. Bernard's looking for answers, and, to finally meet the elusive Arnold. With Clementine programmed to shoot Ford at only Bernard's request, it seems like the most loyal of all the hosts has finally got the upper hand. Only, this being Westworld, what you think you see is not often what you get.

While Bernard is very clever and playing chess, Ford is playing three dimensional chess, and the game ends with Bernard, still under the sway of Ford and his nefarious, deeply embedded coding, holding a gun to his own head. The scene ends with the sound of it going off and Ford walking away, looking grim but determined.

Is this the end of the great Jeffrey Wright on Westworld? Considering the other massive reveal (although half the internet saw it coming) was that Wright's Bernard was a replica, albeit with a different name, of Arnold, Ford's onetime partner and the show's Rosebud, it's likely he'll live on in flashbacks. Also, considering this is a show about humanoid robots, Bernard can simply be re-built. But showrunners Lisa Joy and Jonathan Nolan have been playing the long game the whole time, and one doubts they're afraid to knock off a major character (and a fantastic actor) if it serves the larger narrative they're creating.

Yet, we're left with plenty of questions surrounding Bernard:

Did Bernard actually kill Elsie? Can Maeve somehow come to Bernard's rescue (remember, she's upped her intelligence and is essentially smarter than everyone else at the park now, host or human)? And, considering Bernard was a replicant of Arnold, will someone try to ressurect the latter and thus give us more of Jeffrey Wright going forward?