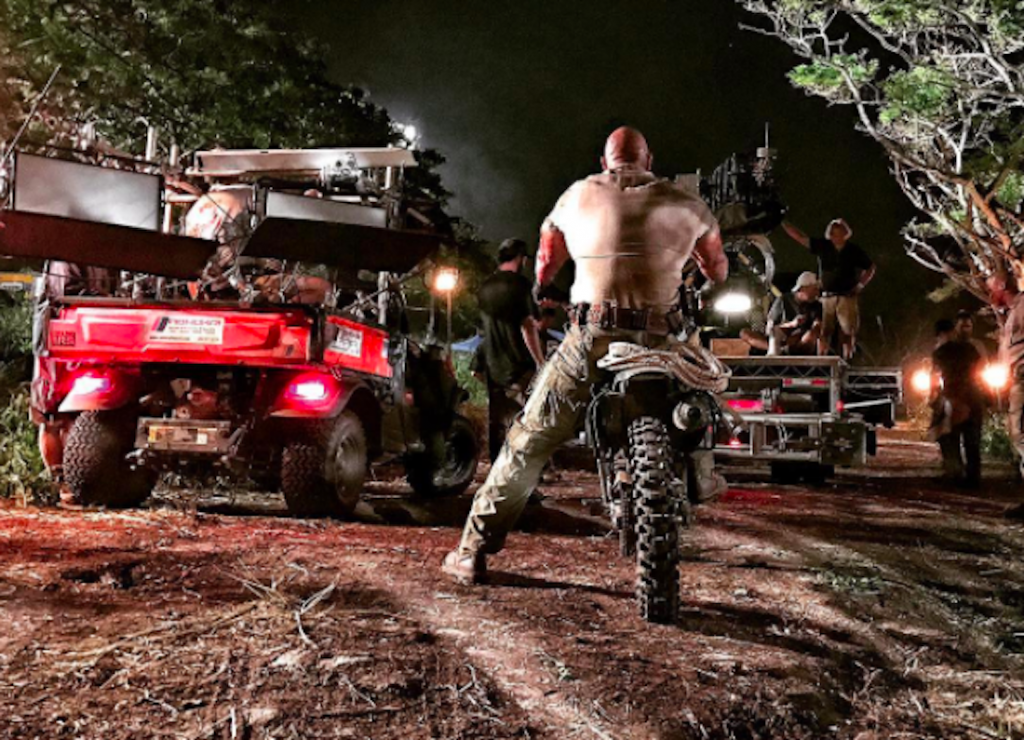 Things are Heating up on the set of Jumanji

Things are heating up on the set of Jumanji out in Hawiia. Dwayne Johnson, a huge fan of Robin Williams and the original film, has been working extra hard along with director Jake Kasdan, the rest of the cast and crew to makes sure the new film is up to snuff. This includes practicing on set with a special flamthrower designed by the film's crack FX team. Johnson plays Dr. Smolder Bravestone, a "smoldering" hero who has this specially created flamethrower attached to his arm. As Johnson says in his Instagram caption: "Our bad ass #Jumanji FX team custom built my flamethrower so it attaches to my arm for tonight's big action sequences. I steer my motorcycle with one hand and become the King of Fire with the other. Already singed the hair off my arm, so we're off to a great start."

Starring alongside of Johnson is Kevin Hart is Moose Finbar, Karen Gillan is Ruby Roundhouse, and Jack Black is Professor Shelly Oberon. From what we've gleaned thus far, the stars seem to be playing gronwn avatars of the kids who are playing the game in the film. Kasdan (Bad Teacher, Sex Tape) is working off a script from Scott Rosenberg, the man who penned High Fidelity and Con-Air.

Jumanji began its life as Chris Van Allsburg’s 1985 children’s book about  a magical board game that causes jungle plants and animals to come out of the game and into the real world of a quiet American suburb. Then in 1995, the book was adapted into a film directed by Joe Johnston and starred the late Robin Williams, Bonnie Hunt, Kirsten Dunst, Bradley Pierce, Jonathan Hyde, Bebe Neuwirth, David Alan Grier and Patricia Clarkson. If the video below is any indication, the new Jumanji looks like it'll be a more muscular, hot-blooded film than the original.