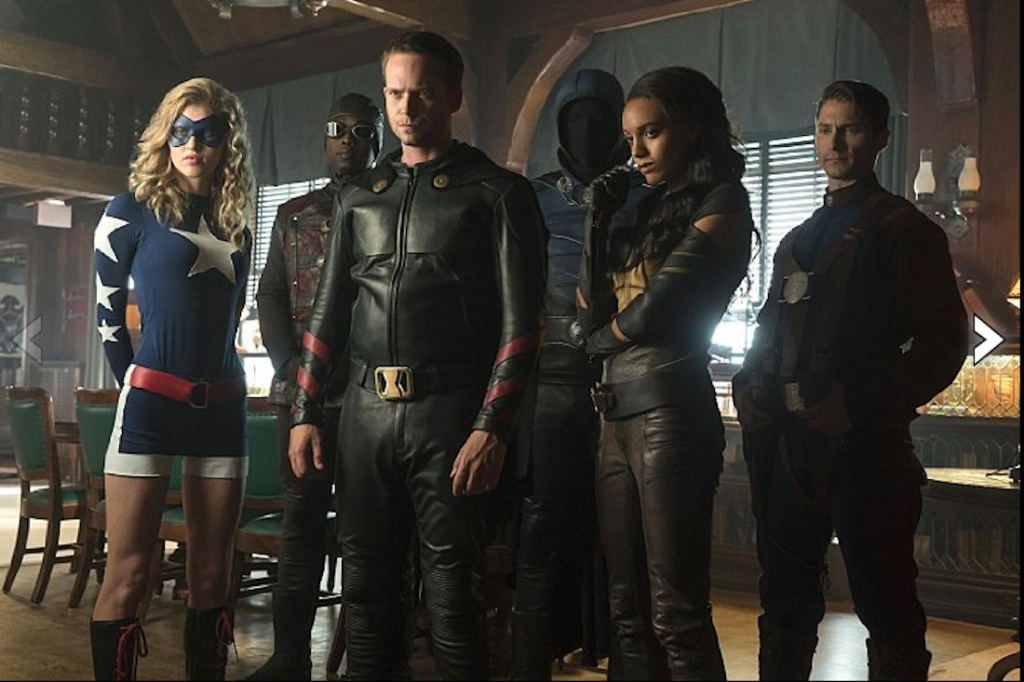 The CW has become home for the DC comics since Arrow premiered in 2012. The show’s incredible success prompted spinoffs The Flash, DC’s Legends of Tomorrow and Supergirl. Cinematographer Mahlon Todd Williams designs the dynamic visual style of the time-traveling epic Legends of Tomorrow. Despite the logistical challenges that come with working on one of four interrelated shows, Williams produces visually stunning masterpieces week after week. His work on the show is excitingly unpredictable as the script on Legends takes the action to endless locations and time periods as the crew travels in Rip Hunter’s time-ship The Waverider.

We spoke with Williams about working within the DC Universe, designing for any era, the epic Waverider set, and more.

Legends of Tomorrow is a spin-off from Arrow and The Flash. Do you have to take that into consideration in your work?

It depends. We did a week of crossover episodes and we do have the characters bounce back and forth. Each show has it’s own sort of look and style even though there are characters that jump between the two. If something happens to a character on one of the other shows, that has to happen. That continuity has to stay together on our show. A lot of the wardrobe is a direct link with the other shows. When it comes to the lighting that I would do, a lot of that is more to do with what’s happening in the story on our show and the location that we’re shooting in. Occasionally we will cross over. We had to do a couple of scenes on Flash’s set on their soundstage. A lot of the lighting that they have set up we tend to follow what has been established on their shows. But if their characters happen to come to our show and just happen to be on the Waverider, the lighting rules that we’ve created on our show tend to apply even if there’s a character from Flash or Arrow.

Does that make your job really complicated?

I think it’s an awesome part of the process. I don’t know how many shows do crossovers and I don’t think there’s any show that does four show crossovers. It’s great. There’s some communication between the departments on the shows trying to find out certain lenses that they used or the color palette that they were using for certain locations or certain scenes. We will find out what that is and match that so that there’s a consistency between the shows and the scenes. And then with lighting and camera that only really takes place when there are specific scenes and a location that happens within all the shows. Especially that crossover episode. There will be a lot more communication at that point between the camera and lighting departments.

How do you create the look of the show?

The cinematography changes a bit sort of based on the story that we’re telling. It’s a bit more of a genre piece as we go into different time periods. When we did the JSA stuff in the 2nd episode, we were in 1942 for a lot of it. Some of the lighting fixtures that we were using and the color temperatures of lights we were using were based on what you would have had in that time period. When the set deck people are pulling lights up for set, they were trying to use period correct lights. There wasn’t a lot of sodium vapor light, we were using a lot of tungsten in the locations. That’s what dictates the change in the lighting style. It’s more sort of the time style that the characters had to enter.

What it is like working with different directors throughout the series?

This season I have worked with all new directors that I’ve never worked with. It’s fun. That’s the great thing about having two DP’s on the show. You get to prep with the director. We’re looking at new locations, driving around in a van all day. We get to talk about the style of the show and how we handle certain situations lighting and camera wise. The assistant director and I usually do a little walk around, especially the Waverider set, and explain what has taken place in each of the locations and how they connect and what is allowed to happen lighting wise and camera wise in each of the places. How things work on the ship. You can be anywhere on the ship and ask a question and sometimes Gideon appears and sometime Gideon doesn’t appear. When that happens, when they doesn’t happen. How you leave the ship, how you get down to Earth. Where it lands, where you can come in and out of the ship. In the ship itself physically, it’s a massive set. It’s about the size of a 747. You can get on steady cam in one portion of the set and you can chase a character out a room into the hallway through another door into another set through another door into a hallway into another room out another door and go to the front of the ship. If you wanted to, you could do a 10-minute shot and actually track a character through the entire set of the Waverider.

Not very many sets are designed to be whole pieces like that, are they?

Yeah, it is unusual. Usually stuff like that would be built it pieces. Maybe you could walk out of a room and then go into a hallway and then if the character walked down the hallway and took a right at the end they would walk out into the middle of the soundstage. I think it was episode 107 where the crew found a stranded ship that looks like the Waverider. We did a sequence where we went into their ship and we chased the guys probably through half the ship on that set. For the crew and especially the actors, it’s this real environment. As soon as you step into the Waverider and the door shuts, you can spin around, look up and down and walk around the whole thing and it’s like you’re inside a 747. To me that stuff is very cool, having the ability to do that.

Do you enjoy shooting in Canada?

Yeah, we’re in Vancouver right now. Our show has been here since day one. Supergirl just moved up here this season. They were shooting season one in L.A. and now they’re up here. [Series creator] Greg Berlanti’s company has Flash, Arrow, Supergirl, Legends. They are all up here in Vancouver shooting. For the crossover episodes, that worked out really well. The characters all basically just shuttled between sets. Some days it was a logistical puzzle for the ADs to deal with.

Sometimes we had characters going to multiple shows in the crossover episode during each day. We would have a character appear on our show from one of the other shows in the morning and they would go back to their show and then we would have a character from one of the other shows show up in the afternoon. They would have to leave by a certain time to do a scene on the other show. You add that to the fact that you’re trying to shoot daytime exterior stuff and the sun is setting so it was tricky, but it was fun. It was cool having other characters appear on our show and just the dynamic of the scenes change too with these other actors appearing. We had the JSA [Justice Society of America] on my first episode of this season. That was a whole different group of characters showing up. That was a very cool episode to do.

DC’s Legends of Tomorrow airs Thursdays at 8|7c on The CW.