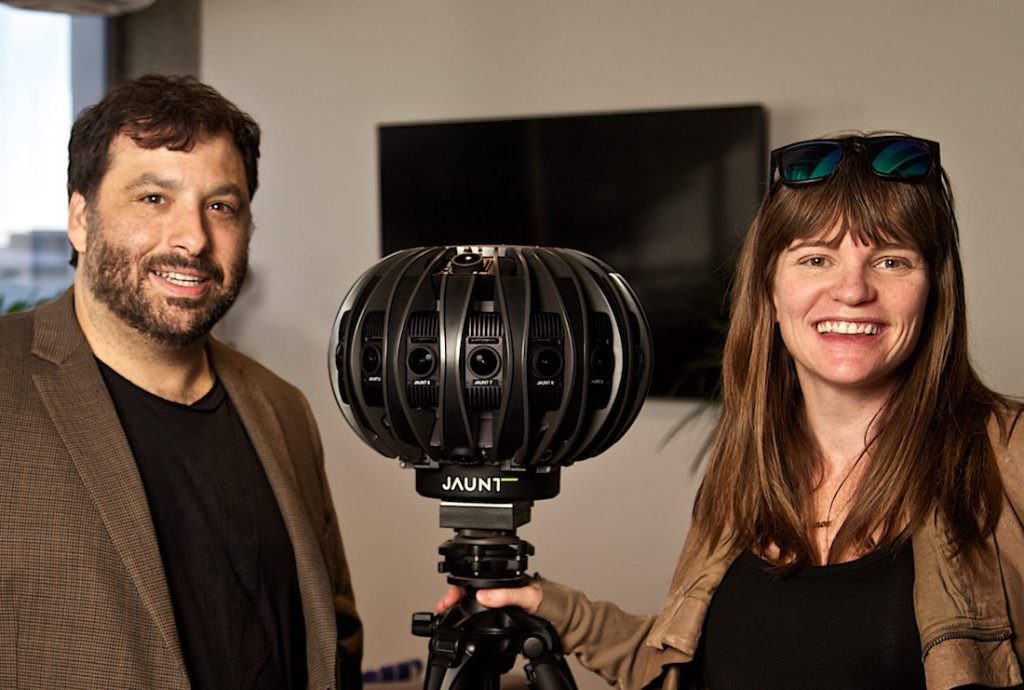 Technology has been propelling storytelling techniques since the advent of the camera. Annie Lukowski and BJ Schwartz are at the forefront of the newest revolution in filmmaking. Their company, Vanishing Point Media, aims to immerse audiences in the story by surrounding them with 360 degrees of action. Using cardboard, optic glass and the smart phone you already own, you can now create a virtual reality (VR) headset to view their stunning creations. If you aren’t ready to invest in the technology, tilting your phone and clicking around on the computer works for now.

Annie and BJ’s Banana Republic Facebook ad garnered over 880,000 views in two weeks, and Stan Lee’s Comikaze enlisted them to create a VR ad featuring the comic convention. We talked with the pair about pioneering the field of VR, learning on the job, where the technology is headed and more.

What is going on in the world of VR?

Annie: It’s super exciting. We’ve been in the business for a little over 2 years now, which makes us the senior old guys in town. We have seen it mature a lot. It’s very much the toddler phase. There’s the filmmaking side and the tech side and they’re both racing and stumbling. When we started in VR, the tech was very rudimentary. You shoot with these cameras that vaguely look like soccer balls with cameras pointing in every direction. And then you have to take all ten cameras and stitch them into one shot. Every single shot is a visual effect. You have to paint out the tripod and the crew. The tech and visual effect side is enormous in this business.

BJ: That [Banana Republic] 360 ad that you can move your phone around or drag around and see all 360 degrees on a web browser, you can also put your phone into a headset that has optics on it. The best one right now is called the Samsung Gear. Your phone just snaps right into it and presents as if you’re there. So if you stand there and turn around, you can see that woman walk all the way around you.

How does VR differ from traditional filmmaking?

Annie: By definition, it’s interactive. To see the frame you have to scroll, you have to look around so there’s a lot more engagement. We’re both film school nerds and love storytelling. When we went out and bought ourselves a camera and got hired for a few gigs, we thought, “We should probably know what we’re doing here.”

BJ: Shannon (Gans of New Deal Studios) asked us to write stuff and we just got the camera and the gear eventually because we were taking this seriously, but we don’t really know what it’s like to tell a story that way.

Annie: It’s been a great learning experience. BJ is always saying, growing up in America we’ve watched a fair bit of television and movies over the course of our lives. We’re vaguely familiar with how that medium works whereas nobody knows how the medium of VR works. It’s great because you can walk into a room and see these guys who have been in the business forever and they know just as much as you do about VR. It’s an absolute equal playing field right now.

What are new things that you have to consider when shooting a story in 360?

BJ: There’s an entire language of filmmaking with editing. When you put on this headset and imagine I put you in the middle of a James Bond movie and there’s two characters talking. You can have the real pleasure of being in on two people talking as they dance because the camera is nearby them. But we can’t cut to the other side of the room just because we want to without the viewer feeling like he was transported. You’ll feel like you jumped across the room.

Annie: It’s such a real life type experience. I don’t teleport around the room while I’m listening to people talk. You just stand there. We wanted to push the medium forward and give people different perspectives that they wouldn’t have in real life, but maintain reality so it’s not jarring.

How did you go about learning what works and doesn’t work in VR?

BJ: We recently spoke at USC and are going to be teaching at UCLA Extension program next semester. One of the things that we keep saying over and over again is, “Try it.”  That’s it. Everybody wants rules. If there’s something in your head that you want to do, you just have to pick up a 360 camera and then put on a headset. Try it and see if it works. That’s how you discover the rules that work for you and the rules that work for viewers of VR.

Annie: You don’t need to hire a million actors and have all the sets. We’ve used my son in a high chair, my dog, set a camera on the table and we’ve shot a scene of my son and my dog eating dinner.

BJ: Or we’ll do walk and talk shots to see if you can move the camera without making people sick, which is a concern in VR.

Annie: We may just have someone say the alphabet and walk across the room and experiment.

Is there any danger the audience could miss the main action if they’re looking the wrong way?

Annie: Yeah, there’s a big danger in that. That’s a conversation. That’s the fun as a filmmaker. It’s my job to making sure you’re looking in the right place.

BJ: People want to look around. Don’t be arrogant about it. Give them the time to look around. Using sound, have people start talking and people will not want to look at an empty beach if there’s two people talking. They’ll eventually look over to those people talking on the beach and they’ll follow the story and let you take them along. People want to be told a story. They might look away from time to time, but in a movie theater, people look at the exit sign. I can’t help that either.

Annie: We all have various attention spans and curiosities. You make sure that your story ebbs and flows. If you’ve got a very very important moment, then you throw everything at them. Light, motion, sound, those are the main things that draw attention in traditional film and the same things that draw the eye in VR. Just don’t be doing that the whole time because you’re going to lose people.

Where do you think people will be watching VR? In theaters or at home?

Annie: It’s interesting. The non-entertainment applications for VR are impressive. Aerospace, oil and gas, medicine, education. All of those sectors will use VR and use it very well. It’s going to be a boon to a lot of different industries. One benefit that gaming has is that a lot of games are already built in 360. It’s a very simple pipeline to take that content and put it in the headset. Whereas films were not built in 360. You can’t just throw Hitchcock through the computer and watch Rear Window in VR.

BJ: There’s about to be a big video gaming push. The video gaming stuff is amazing. There are three systems out there that are somehow tethered to another processor or gaming system. That’s the Playstation VR, the HTC Live and the Oculus Rift. All of those systems at some level are about to be capable of doing something called room-scale. With a couple of sensors you can actually move around in the space. This stuff is going to blow people’s minds. There’s no doubt about it.