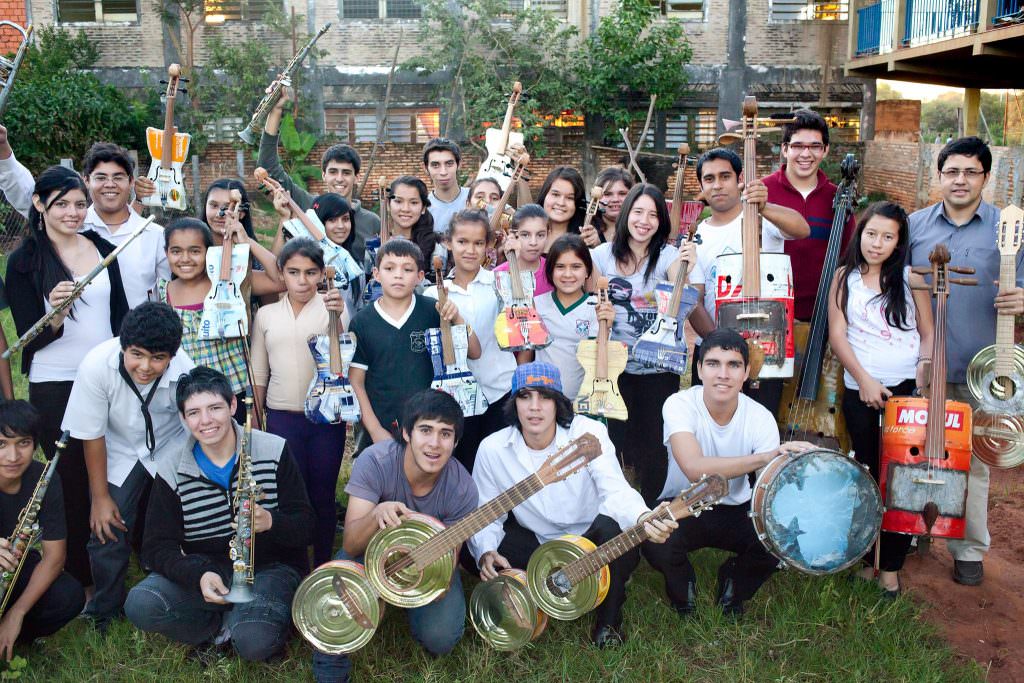 Few people would have the creative vision to construct an entire orchestra from a mountain of trash, but such is the story of the Paraguayan town featured in Landfill Harmonic. Nearly ten years ago, the community came together to build instruments from the garbage flooding their home. The recycled music makers gave local students an opportunity to learn to play symphonies and propelled them to international acclaim.

The story was so transcendent that it attracted the attention of eight-time ASCAP award winner, Michael Levine. “I’m a big believer in the power of music and the liberating force for the human race,” Levine explained. “That may sound a little overstated but it really is one of our oldest binding things that connects people together.”

Levine composed the documentary’s score and wrote an original song for the film. “The idea of these kids who have absolutely everything against them [and] are able to get out of the framework of oppression by joining together in an orchestra is such a great story,” Levine said. “To throw in this additional barrier of, ‘Oh by the way, there are no instruments for you, so we’re going to have to make them.’ When you consider their socioeconomic situation, it’s nothing short of a miracle.”

Having built a professional career in music that spans more than three decades, the celebrated composer was inspired by the triumph of the young musicians. “I met many of the kids, including most of those in the film, and they’re really a remarkable bunch of kids because there’s a lack of entitlement these kids have which is kind of refreshing,” Levine recalled. “They realize that if they are going to have a future, they’re going to have to make it for themselves.”

With the cost of musical instruments often ranging from hundreds to thousands of dollars, learning the art can seem out of reach for impoverished communities. The musical quality achieved by the students in Landfill Harmonic makes their success even more remarkable. “In some ways it’s become a symbol of their accomplishment, which is to have all these recycled instruments. It’s actually not an ideal musical solution but it was a whole lot better than nothing. To make an instrument is not hard. To make one that is functional, especially one based on classical instruments, is actually very difficult.”

Of course, to truly capture the spirit of the story, Levine couldn’t resist including the homemade instruments in his final score and even created some instruments of his own. “They gave me a recycled violin because I’m a violinist, and my wife got used to the image of me digging through the recycle on a daily basis looking for, ‘Oh, maybe I can use this bottle as a flute. Oh, hey what about this box as a bass drum?’”

While the story of Landfill Harmonic is unforgettable, Levine has some memorable experiences of his own. Like writing one of the most recognizable jingles in TV history, Kit Kat’s Gimme a Break. “Doyle Dane Bernbach had developed a campaign called Kit Kat Krazy that they put a lot of money and heart and effort into and they needed a throwaway campaign. Something that their client could go ‘No, no, no, forget that. Yeah you’re right, your campaign is the right idea,’” Levine recalls.

After reading the lyrics written by Ken Shuldman, Levine wrote the song and sang the original demo. The tune was an immediate hit. “They put it into test and it did great while the other one bombed,” Levine laughed. “They thought it was a mistake with the test so they tested it again and it did even better. So after that, they went, ‘Okay, maybe we should use this as our commercial.’”

As for Levine himself, he doesn’t seem to take any breaks. He composed the music for Star Wars Detours produced by George Lucas starring Seth McFarlane and Seth Green. They currently have 39 episodes in the can, but a release date has not yet been announced.

Available now on Netflix is Levine’s work on documentary City 40 that he describes as, “A really interesting story about this insanely brave, or maybe bravely insane, film director who snuck into a Russian nuclear weapons building and did a documentary about the most nuclear-polluted city on Earth.”

Levine also worked on upcoming sci-fi film The Summerland Project with another legend of American songwriting. “I wrote the closing credits song with Arthur Hamilton, who wrote Cry Me a River 65 years ago.” Levine added laughing, “He told me this is the weirdest song he’s ever written, but he says that’s a compliment.”