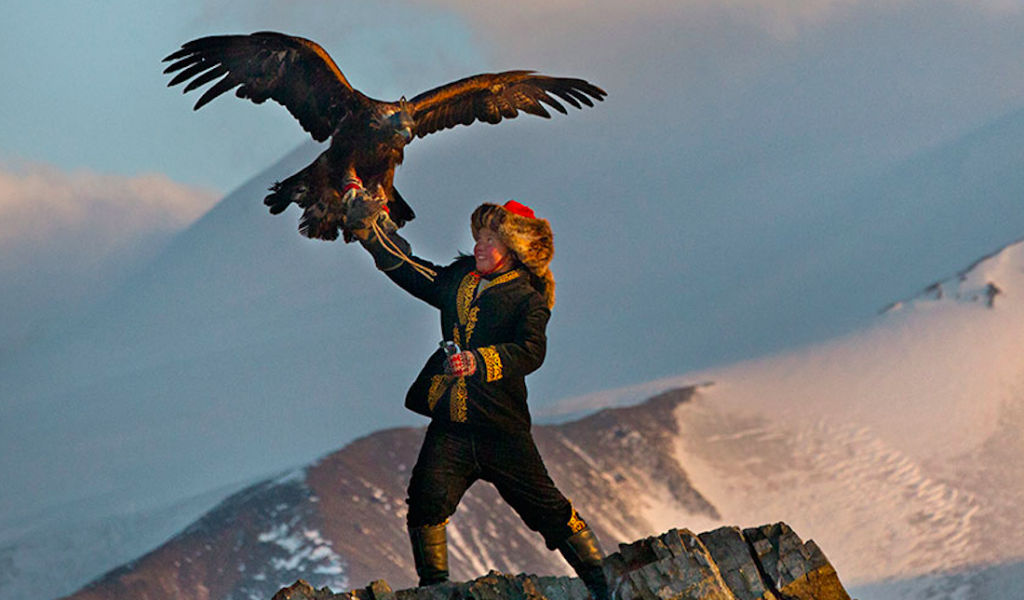 As inspiring as Katniss Everdeen was, there's one thing the 13-year-old eagle huntress Aisholpan has over her; she's real. Sony Pictures Classics The Eagle Huntress introduces audiences to the young member of the Kazakh people in the Altai region of western Mongolia, where she's training to become the youngest eagle huntress in the region's history, and one of the few women to ever take up the practice.

For 2,000 years, the Kazakh people have practiced a tradition of hunting with golden eagles, whose wingspan can reach up to 7.5 feet wide. Eagle hunting has traditionally been the domain of men, but Aisholpan is determined to become an apprentice hunter after spending her childhood helping her father, a legend in the practice, care for his birds. Eagle hunting isn't just tradition, it's survival; the food the eagles track down is vital to the Kazakh's diet. Aisholpan learns the difficult world of falconry under her father and grandfather, from taming her very own eagle to training for an annual competition, where she will compete against 70 eagle hunters on her quest to gain acceptance.

Shot in western Mongolia's stunning, hard landscape, The Eagle Huntress boasts the type of cinematography, both sweeping and intimate footage, that would have required a massive crew only a few short years ago. The film witnesses Aisholpan pursue her passion and break down gender barriers in a very traditional culture, while also giving viewers a glimpse into the lives of this remote community, as they balance their traditional lifestyle with the modern world.

The film's directed by Otto Bell, narrated by Daisy Ridley, and shot by cinematographer Simon Niblett, who used an array of drones, cranes, motorized tracks and multiple digital cameras to catch the incredible shots in the film.

The Eagle Huntress soars into theaters on November 2, 2016.