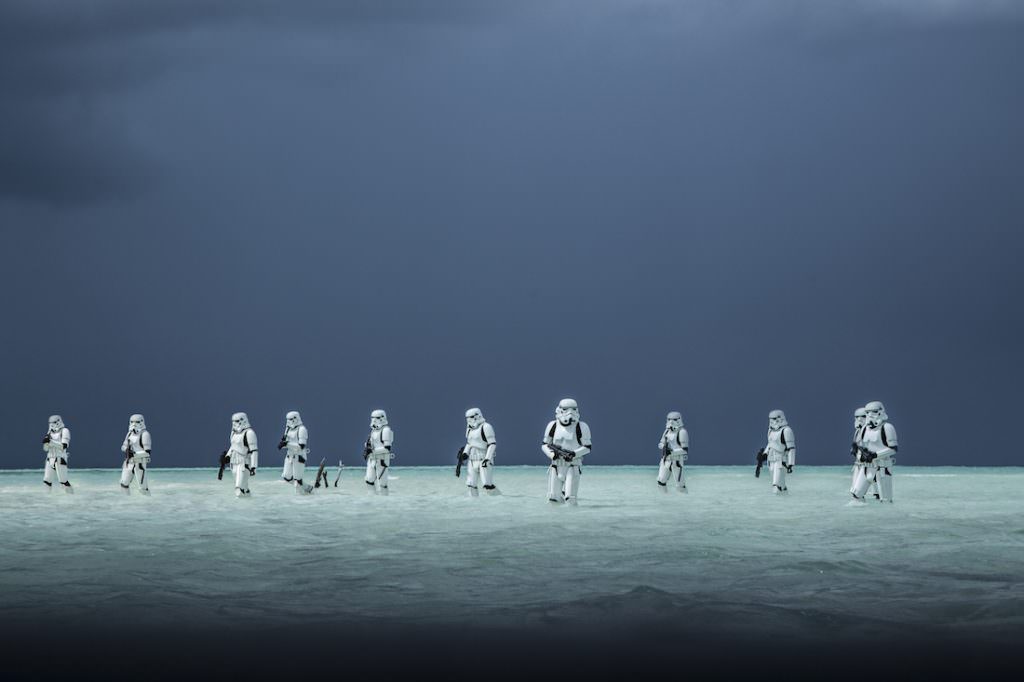 While a good chunk of any Star Wars film will be filmed at the colossal Pinewood Studios in Buckinghamshire, England, there are still quite a few crucial set pieces that take place all across the world. For Rogue One: A Star Wars Story, that includes films shot in Jordan, Iceland, the Isle of Dogs, and, a deserted island in the Maldives.

On location in the Maldives. Courtesy Lucasfilm/Walt Disney Studios.

You've probably alredy seen the now iconic photo above of a phallanx of Stormtroopers marching through some pristine ocean water. This scene was filmed on the beaches of Laamu Atoll, a remote series of islands and making up one of the Maldives 26 coral atolls in the Indian Ocean. Filming has been reported to have taken place on the islands of Baresdhu Island and Laamu Gan. For Rogue One, Laamu Atoll is the setting for a planet called Scarif, a place of crystal blue waters, white sand beaches and palm trees. This is the first truly tropical planet we've seen in the Star Wars series that wasn't set inside a dense jungle.

In this new behind-the-scenes featurette from Screenslam, Diego Luna, who plays Captain Cassian Andor, one of Jyn Erso (Felicity Jones) main allies in the attempt to steal the Death Star plans, gives us a brief visit to a few sets in the film, including the Maldives, where you'll see a massive battle taking place. It's just one of a few exotic locations director Gareth Edwards used to give Rogue One a truly unique look, a crucial step in making the very first non-saga Star Wars film pop.

Rogue One: A Star Wars Story opens on December 16.