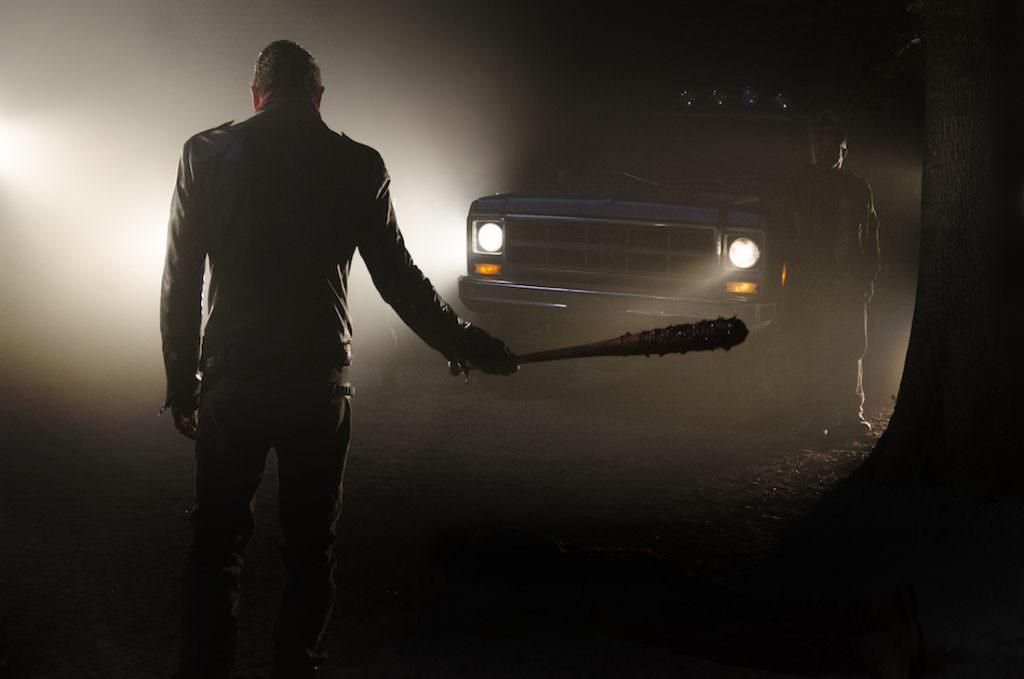 The Walking Dead Premiere as Brutal as Promised

Still here? Great. Still feel a little sick from last night's episode? Yeah, us too. Just as Lennie James told us when we interviewed him, The Walking Dead's season 7 premiere was absolutely brutal. As had been hinted at before, Negan (Jeffrey Dean Morgan) doesn't just kill one beloved member of Rick's (Andrew Lincoln) crew, he kills two. And not only that, the scene, which they stretched out over the course of the entire hour-long episode, is astonishingly gory. Abraham (Michael Cudlitz) and Glenn (Steven Yeun) were dispatched in the most horrific way possible. 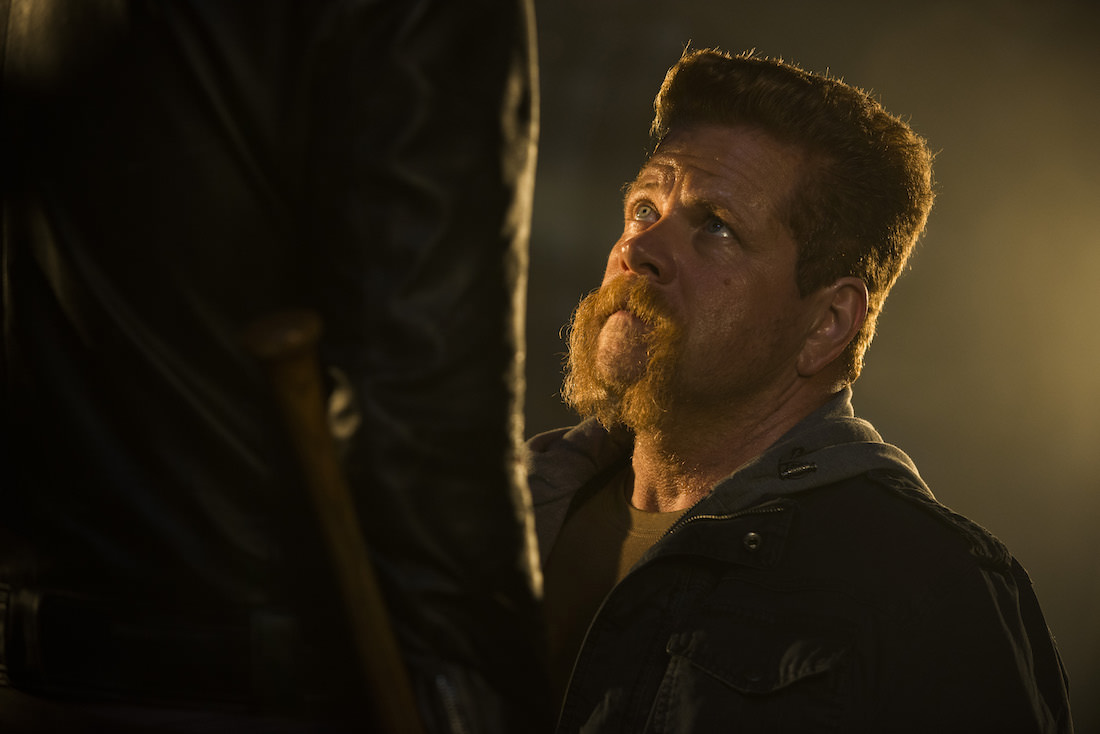 Glenn's death was particularly gruesome, as, like Abraham, he survived the first blow but was hideously maimed, seeming to try to speak to Maggie (Lauren Cohan) before Negan finished him off. Over at Vanity Fair, they report that Glenn's final words towards his pregnant wife Maggie, blood pouring from his head, were "I will find you." 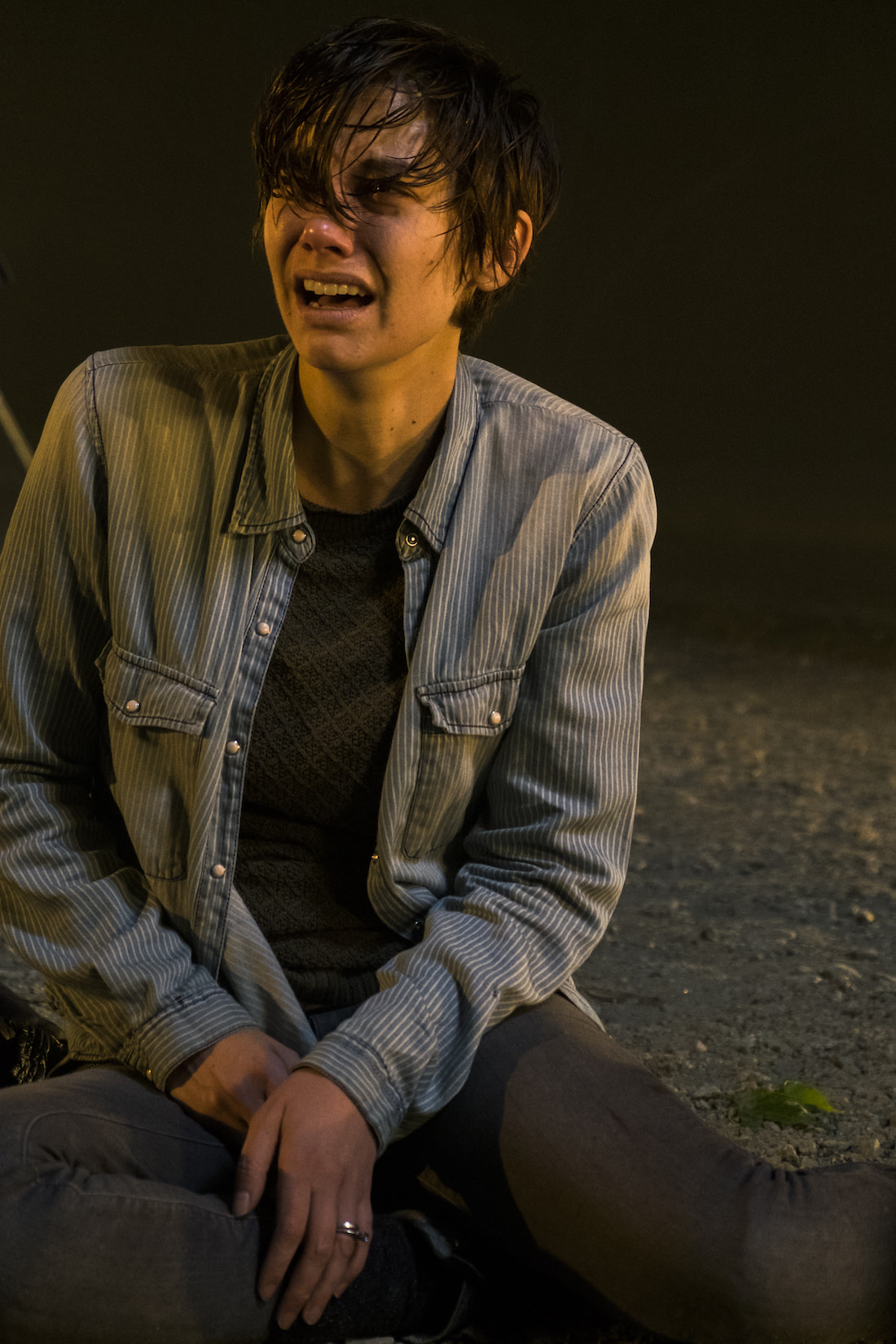 The episode was very, very difficult to watch. Rick was reduced to begging for Carl's life when Negan, in a sadistic game of breaking Rick in front of the survivors, draws a line on Carl's arm and tells Rick to chop it off right there with his hatchet. Thankfully Negan spares Carl this sickening fate, but at that point the group is decimated, Rick's a slobbering mess, and Daryl, having punched Negan in a suicidal fit of rage, is kept as a prisoner while the rest of the surviving group are left to now be good little soldiers in Negan's army.

On The Talking Dead, Chris Hardwicke's post Walking Dead wrap-up and interview show, Cohan and Yeun talked about that final, agonizing scene and how she interpreted Glenn's words. “In this life or the next,” Cohan said. “They’re star-crossed lovers. ‘I’ll find you, I’ll be with you, I’ll watch over you. I’ll be there.’” Yeun said, “He dies in such a Glenn way. Still not thinking about himself. It’s important the he puts those final words out as a way of saying, ‘Look out for one another.’”

Glenn's character was one many fans expected to see go. He's the one who dies at Negan's hands in the comic, and Yeun said that all along he wanted to honor Glenn's gruesome fate. "Robert wrote such a messed up but at the same time incredible way to take something away," he said on The Talking Dead. "To make a story as impactful as it is. When you read the comic, you kind of don’t want that moment to go to anyone else. I think I said that, ‘Don’t let that go to anyone else.‘ To do it the way we did it, I think, was brave and super effecting."

Here's a look ahead at the next episode, which, blessedly, seems like it might spare us from the kind of endless horror that we just all suffered through.