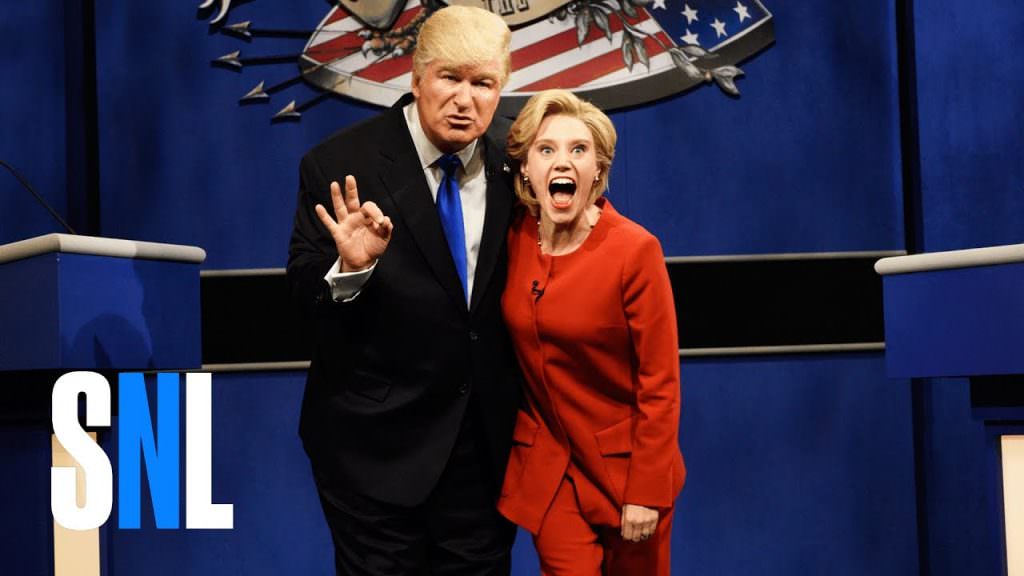 It's a nearly 10 minute cold open. SNL kicked off their 42nd season in the way you knew they must; spoofing on last Monday's presidential debate. The results were pretty spectacular. Alec Baldwin played Trump, and the makeup work alone was worthy of an Emmy (especially the odd white circles around Trump's eyes), but Baldwin also did great voice work, and took Trump's much discussed display of weird facial expressions and hardcore sniffing to the extreme. The performance was memorable, slightly grotesque and very, very funny. Kate McKinnon reprised her role as Hillary Clinton, nailing Clinton's increasing glee as the night wore on and her opponent became more and more unglued. She even got in the now infamous, gif-classic shoulder shimmy. Michael Che played Lester Holt, and like Holt, allowed the two comedian candidates a lot of room to roam.

Rather than give you the play-by-play, here's the cold open in case you missed it. SNL has always taken advantage of the presidential election, and, has even had some serious influence on how voters see candidates. The most obvious example was Tina Fey's devastatingly funny Sarah Palin, but it's hardly the only performance that resonated. After the first debate between Vice President Al Gore and Texas Governor George W. Bush, SNL famously mocked Gore's sighing and overall petulance at the debate, and according to many observers, did serious damage to his image. It'll be hard for anyone to affect Donald Trump's image more than Trump himself, but Baldwin seems up to the challenge of trying.

In sum, SNL is must-watch TV this fall.