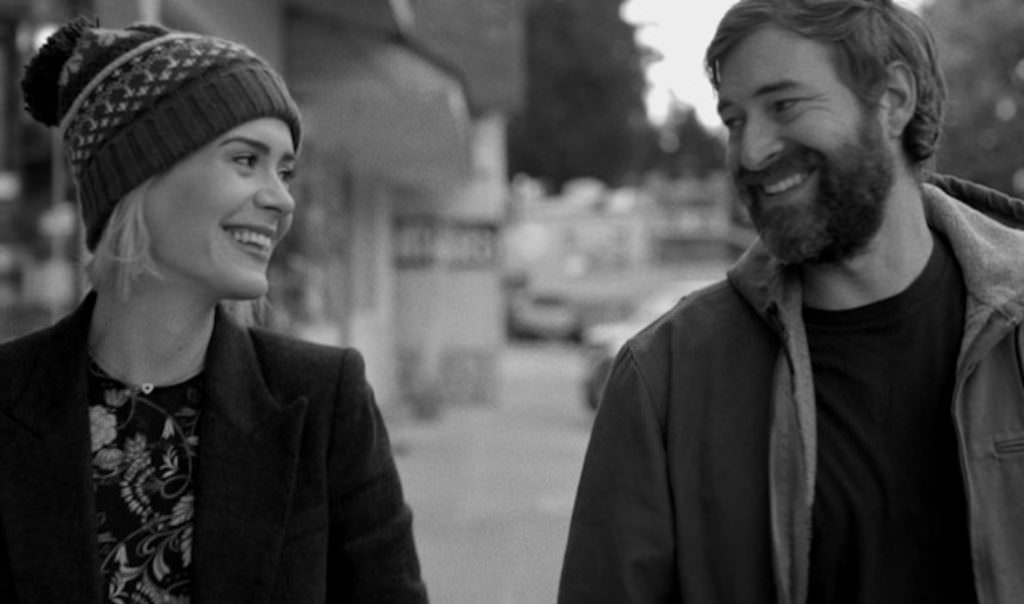 Mark Duplass on Stripping Away Artifice For Blue Jay

“I have it deep in me. I can put on Same Time, Next Year or Somewhere in Time and just go for it,” he says. “I’m a nostalgic and melancholic person and I normally try to curb that in my art because I feel like if I don’t, it’s going to run rampant over everything. With this movie, I [decided to] let the floodgates open and spill it all out.”

That movie is Blue Jay which Duplass wrote, co-produced with brother Jay, and co-stars in alongside Sarah Paulson. Duplass and Paulson play former high school sweethearts Jim and Amanda who, after more than 20 years, are reunited by coincidence in their scenic but sleepy hometown in the San Bernardino mountains of California. Back in Jim’s boyhood house, which he’s cleaning out after his mother’s death, they reminisce as they rummage through old letters and cassettes; dance to Annie Lennox; deal with old hurts and, finally, face how the past has shaped the present.

It was an intimate collaboration among the actors, producers and director Alex Lehmann, a documentary filmmaker and cinematographer Duplass met on the his FX series The League. (Duplass also produced Lehmann’s documentary feature Asperger’s Are Us which Netflix will release at the end of the year.)

Shot over seven days, in black-and-white, Blue Jay is a two character, highly improvised piece that Duplass, Paulson and the crew shaped over the course of the speedy shoot. Duplass says the team would film for eight-to-10 hours, discuss the days’s footage over a meal, then he would write new material for the following day.

“We wouldn’t have time to memorize; it was a guideline with the goal being that by the time we got to take three or four, it’s happening and you are capturing it while it’s coming together,” says Duplass.

That’s why he chose Lehmann to direct.

“I really wanted a documentarian to direct this movie because I felt we were chasing a story instead of exacting a story. I wanted a director who could … chase it in the moment. I wanted an improvisational feel with a strongly plotted guideline. I wanted to do a slower, more meditative film that hopefully paid off for the audience if they stuck around for it,” Duplass says. “But we were nervous, honestly. This movie felt like one we could fall on our faces with. We stripped everything away; we did it black-and-white with very few characters; we laid it bare. It was that great, earnest, acoustic record that’s like, ‘you can’t hide behind the drums.’ It’s just you and an acoustic guitar so you better do it right.”

Blue Jay  which premiered at the Toronto International Film Festival opens in New York on Oct. 7; Los Angeles on Oct. 14; and on VOD platforms on October 11. It’s the first film to be produced under the Duplass Brothers’ four-picture deal with Netflix and it also marks an ongoing relationship between Duplass Brothers Productions and indie distributor The Orchard. Although their HBO series Togetherness was recently cancelled, the Duplass brothers are hardly slowing down. Besides writing a book about their collaboration and relationship, Jay is a regular on Transparent and Duplass Brothers Productions is working on an anthology series for HBO called Room 104.

Blue Jay is a romantic story but much of it, particularly the scenes where Jim and Sarah wax nostalgic over their youthful old audio recordings, Duplass says, grew from the kinds of things he and his older brother did as teenagers.

“I took my two high school girlfriends way too seriously but my brother is like a first love; we’re so intrinsically tied,” says Duplass. “Jay and I were so in love with each other in high school, I would just film him running around the block and put music to it. We just adored each other and didn’t know how to talk about it because we were dudes so we’d make weird pieces of art for each other. The [cassette recordings] was more born out of my relationship wth Jay than with any girlfriend,” he says.

“My brother and I have a lot of that stuff [such as] covering Hall and Oates or The Commodores songs on an 8-track when we were 15 years old. I listen to that stuff, and 90 percent of me has a great time poking fun at the cockiness or the earnestness. And 10 percent is, ‘I’ve lost something. I miss that person and I don’t know how to get him back or even if I want to.’ To approach that with a sense of goofiness and seriousness, which I guess is the same thing for me, was a big goal for this movie.”

Since the film is a “two-hander,” Paulson was a key element and she more than fulfilled Duplass’s huge expectations. “Sarah I’ve known socially as a really silly and sweet person which you might not guess, watching Carol or [Paulson’s Emmy-winning role as] Marcia Clark. She can do anything, and we put her through a lot on this movie. She doesn’t like to improvise. She was terrified of that; she likes her scripts. But I knew she was going to be great. Sarah is a truth seeker and she does not suffer fools and I knew that that would play to our advantage. That’s what makes these movies good: the ability to admit if something’s not working and try something else. That’s what keeps me vital, or at least interested, as a filmmaker.”