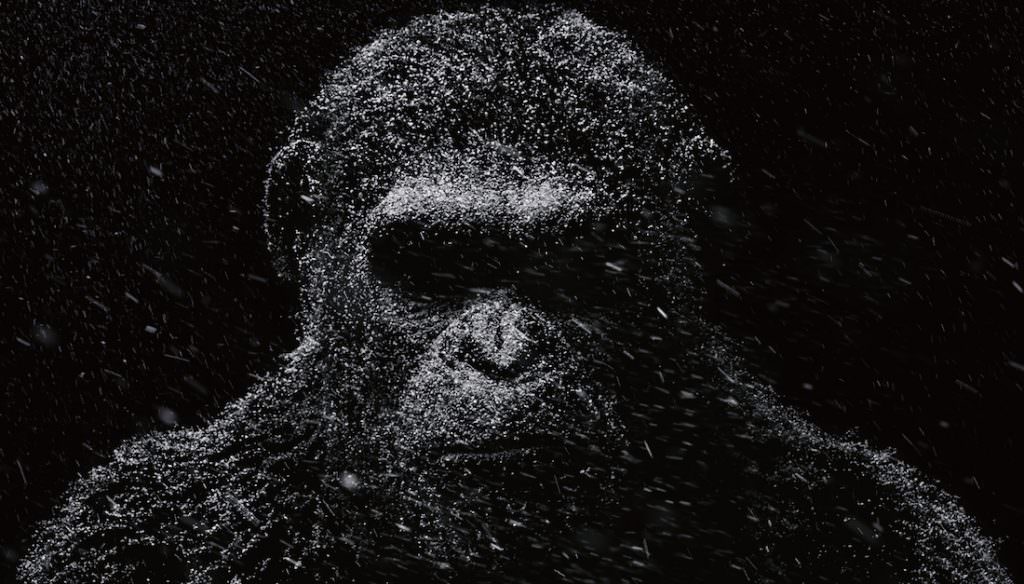 The goods are already flowing from New York Comic-Con. 20th Century Fox released this digital billboard for their upcoming War for the Planets of the Apes, which continues their comerically and critically successful reboot of the Apes franchise. For Comic-Con attendees, the studio also shared footage from the film, and the reaction has been very positive.

On hand in New York were director Matt Reeves (the man behind 2014's excellent Dawn of the Planet of the Apes), producer Dylan Clark, and star Andy Serkis (read our interview with Terry Notary, an actor and movement coach who helped make the actors move like real apes). They shared conventional teaser trailer and a rough seven-minute sequence from the film. They also shared what has become Serkis's trademark—the incredible motion-capture process he has perfected. None of this is online yet, but will be eventually. Luckily, we have the goods for you.

The trailer opens with soldiers moving through a cave. After a few tense moments, a voice over their walkie-talkie says "Target confirmed." Only the target turns out to be them—the cave is lit up with gunfire as the soldiers are attacked. The apes enter the frame.

The target, it turns out, was Caesar (Serkis). And now we watch as Caesar picks up one of the walkie-talkies and hears, “Did you get the target? Is he dead?” The soldier on the other end of that connection is the Colonel (Woody Harrelson, new to the franchise), his face covered in cammo point. When the Colonel sees that Caesar has found him, he rappels down a waterfall to escape. Caesar needs no rope line; he jumps down after him.

This is when the teaser broadens to show the larger conflict between the humans and the apes. The humans have an army, including tanks. We also see the ape side, with their human captors. We glimpse an incredible, snowy battle, and finally, the teaser ends with Caesar on his knees in front of the colonel, gun to his head.

TAGSWar for Planet of the Apes