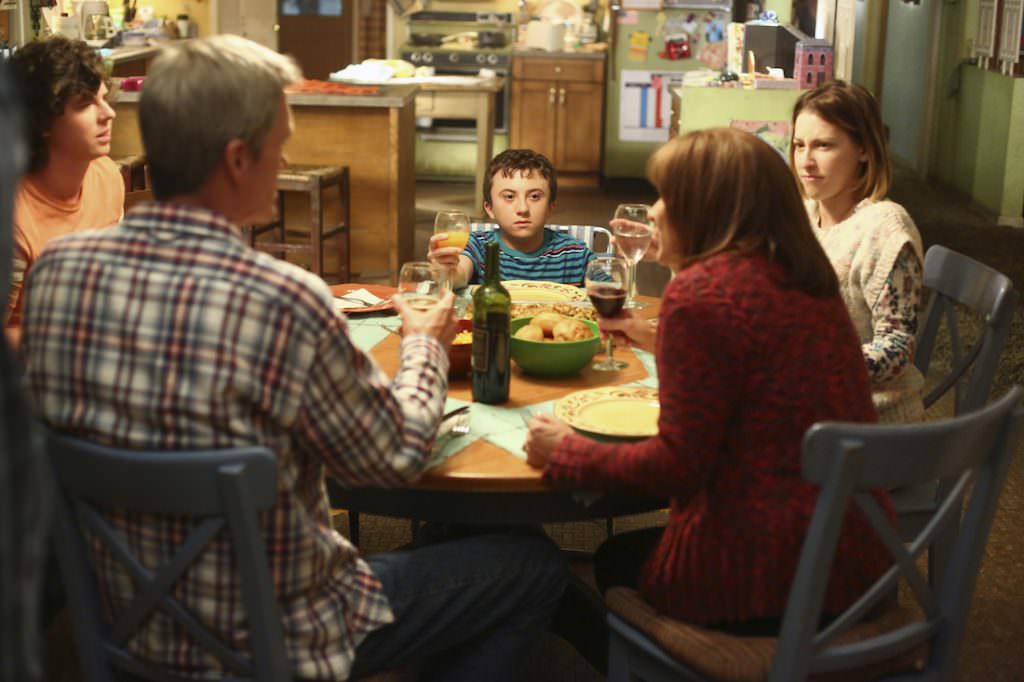 Atticus Shaffer Talks Growing Up on The Middle

Over the impressive seven season run of ABC’s The Middle, Brick has been the oft forgotten third child of Frankie (Patricia Heaton) and Mike Heck (Neil Flynn). His family has literally forgotten him at work and school, but actor Atticus Shaffer has become a fan favorite. A child actor no more (he just turned 18), Atticus has played Brick Heck since he was eight years old.

Socially awkward, book smart Brick is a sage and precocious observer who often teaches adults a life lesson or two. Audiences have watched Brick, Axl (Charlie McDermott) and Sue (Eden Sher) grow up on screen and the season 7 finale highlighted through flashbacks just how much of a transformation Brick has made since the show’s 2009 premiere. Now entering high school, Brick is the only kid left at home and he’s hitting his stride (and taking over Sue’s room).

Premiering October 11, The Middle is moving from Wednesdays to Tuesdays at 8/7c, but that’s not the only big change happening in the Heck household. We spoke with Atticus Shaffer about Brick’s trademark ticks, the surprise talent he showed off in the season finale, this season’s new romance, and more.

You have spent almost half of your life playing Brick. What is your favorite thing about him?

Actually, I’ve been playing Brick for over half my life. I’ve been Brick for ten years now. He’s such an amazing character because he’s a character that shows it’s okay to be unique and to be different and march to the beat of your own drummer. Brick is very confident in that. Earlier in the show he was in a social group and Frankie and Mike are trying to “fix him”, but as the show has progressed, it has embraced who he is and his quirkiness and the fact that he does march to the beat of his own drummer. He’s an amazing character. He’s smart. I love the fact that he loves to read. That’s what I find most relatable to him. I have always embraced that we’re all created to be unique and individual and he’s an amazing character that shows that in a great way.

So you’re glad that they didn’t “fix” him in the social group?

Yes, exactly. In fact, it made him even more who he is.

Brick’s ticks are a trademark of the show. How did you develop all of his quirks?

The silhouette is based on show creator Eileen Heisler’s son. He used to whisper, he has licked a car. He has some of the quirky traits. When I came in as the actor and read the sides, I did my own twist to them. Playing Brick and being this character has been one of the things that you really get to sink your teeth into as an actor and develop. Obviously it started with the whispering, but then it developed into the whooping and rubbing of the ketchup packets and stuff like that. It’s so cool to be able to see.

What do you have in common with Brick?

I love to read. I’m a big story person. I love to tell stories, I love to read stories, I love to write stories. I definitely have that in common with Brick. He’s definitely the nerdy type. I am a big nerd and am very proud of it. He’s into the whole Planet Nowhere thing and he likes to cosplay and be able to embrace that inner world of geekdom. I’m very big into that. I’m a big Dungeons and Dragons player, I play Yu-Gi-Oh! I’m a big video gamer. I’m a big nerd in that way. When I go to places like Comic Con, I get the same feelings that Brick does going to a Planet Nowhere convention.

We’ve seen a lot of relationships come and go on the show, but Brick and Cindy have endured. In the season 7 Halloween episode Brick predicts he’ll marry his, “Smoking hot middle school girlfriend.” Do you think they’ll make it in the long run?

I personally feel like because of that episode, it is a sign that they are going to make it. While they have had their ups and downs, like when she kissed another boy, I definitely think that Brick and Cindy have potential to make it in the long run. I didn’t expect to be the character that had the more stable relationship. That came out of left field for me. But it kind of became cool to know that that’s there and to have this extra character to interact with. Earlier in the series, besides the social group and Dr. Fulton, Brick never really had a lot of people to interact with on a regular basis. Sue had her friends. Axl had his friends. Even Frankie had Bob and Mr. Ehlert. That has kind of evolved in the show over time for Brick to go on and have Cindy and Troy along with the other characters from school. I’m excited about it because I really enjoy being able to work with guest casts so that makes it fun and adds a new element to the show.

At the end of season 7, we found out that you’re a really talented singer. How did that scene come about?

There are certain season finale things that they need to plan way in advance. The writers are typically much ahead of us. They know what’s happening at the end of the season whereas we get it on a weekly basis and find it out as we go. In real life, I-R-L, my mom has a very good ear for music. I wouldn’t call her a musician simply because she doesn’t do it all the time, however, she is a phenomenal singer. She taught me to love music and I love listening to music and it is just such a powerful thing for me in my life. And then my dad has a tin ear. When he sings, it is not necessarily nails on a chalkboard, but it’s like the sound of a trash truck lifting up a very large dumpster repeatedly. So there are times where a little bit of my dad’s tin ear will come out in me and I’ll go off key a little bit. But because my mom is usually taking me to work and we’ll play music in the car, I have gotten much better at singing and hearing tune.

Can we expect for you to drop an Atticus Shaffer album soon?

[Laughing] No, no. I like to sing, I’m not that talented, though. I probably could write a song if I put my mind to it, but I can’t hear the notes out of thin air.

I grew up in the Midwest and feel like I have lived every episode. What do you think has made the show so relatable for 7 seasons?

It’s stuff that’s real. We’re not a show that’s in a hypothetical world and we’re not a show that’s in a hypothetical storyline. We’re a show that’s pretty much based on real life. The writers will take anything they can from stuff they have experience in their own lives. They will even take stuff from cast members lives and crew members lives. They make it real. As a TV show, they’ll amp things up a little bit and add to it a little bit more. I like that because in real life, say you drop a very valuable antique at grandma’s house because you were that guy who picked it up when you wanted to look at it and you have fumble fingers. We take real life situations, amp it up because we’re a comedy show. Nine times out of ten it is something that somebody has gone through. It’s hilarious. I think it’s one of those things that people can relate to because it is so lighthearted and stuff that can happen in real life. How it gets resolved and showing the uniqueness of the characters are things that made the show so successful.

The Hecks have such a dynamic chemistry. How did you all develop such great on screen relationships?

I have no idea because as soon as the cameras cut, the billy clubs and switchblades come out. No, I’m kidding. When you work in the same environment for 8 years, you really get honest with people. It’s 8 months out of the year for going on 8 years. That’s a long time. We have gone through a lot on this set because of locations that we’ve done, personal things that have happened in all of our lives, how we’ve grown up – especially with me being the youngest, I have grown up and matured on the set.

What’s going to be new in season 8?

I am very excited about this year. I actually turned 18 in June. What that means for me is I can work more hours on set. I can work adult hours now because I’m a legal adult. They’ve taken that and said, “Hey, let’s really commit with this and put out some really amazing stuff.” Not just solely for that reason, but the writers are on fire this year. I’m very excited for everyone to see the storylines we’ve been putting out.

What can we look forward to seeing from Brick and the rest of the Hecks this year?

With Brick specifically, he’s going into high school now. He’s trying to revamp himself in a way. He’s still unique Brick, but because it’s a new school, it’s a fresh start for him. He really wants to capitalize on that. Not necessarily fit in, but not be the kid that’s sitting alone at lunch talking to his backpack. He’s trying to put himself out there. Sue is going to be working on figuring out what she’s going to major in at college. One of the bigger storylines is Frankie, Mike, Brick and Sue get to meet Axl’s “love of his life” that he met but we didn’t get a chance to see at the end of last season. The character’s name is April and she’s been in quite a few episodes now. That’s one of the main storylines we follow is Axl being in this relationship with April.