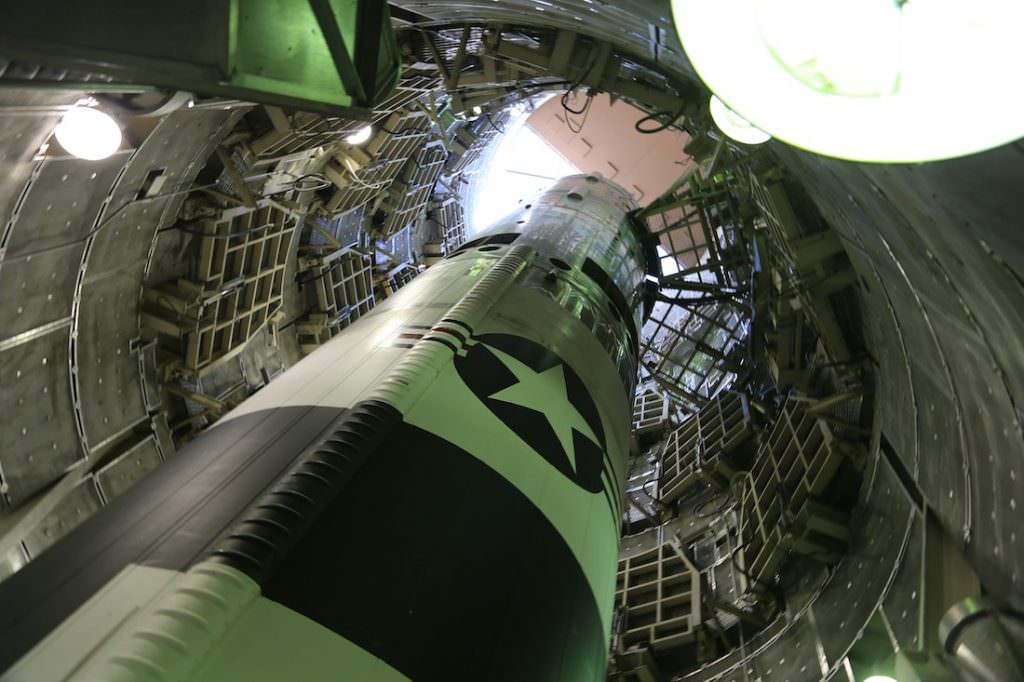 In September 1980, a Titan II missile bearing a nuclear warhead caught on fire in a Air Force silo near Damascus, Arkansas. The incident was reported at the time, but the full implications of the conflagration weren't widely known until Eric Schlosser's book, Command and Control: Nuclear Weapons, the Damascus Accident, and the Illusion of Safety, was published in 2013.

The author interviewed Harold Brown, then the U.S. Secretary of Defense; Bob Peurifoy, head of nuclear weapons development at Sandia Labs; and General Lloyd Leavitt, the vice commander of the Strategic Air Command, who was in charge the night of the accident. He also talked to such workers as Dave Powell and Jeffrey Plum, who actually entered the silo to battle the flames. Their accounts are punctuated by reenactments Kenner filmed at the only Titan II missile silo that remains after the program's  shutdown.

One of the emergency firefighters died, but the nuke didn't explode, saving Skip Rutherford, then an aide to Arkansas Sen. David Pryor, and a few hundred million others.

The book is the basis for director Robert Kenner's film, Command and Control, a PBS *American Experience** documentary now in limited theatrical release before its broadcast debut. Kenner and Schlosser recently visited Washington to talk about their collaboration, their second. Kenner directed Merchants of Doubt, which showed how companies diffuse and distract the issues raised by such dangerous products as cigarettes, and Food, Inc., a documentary derived from Schlosser's book, Fast Food Nation, which was also the source of Richard Linklater's fictionalized movie.

That the director and the journalist have become pals was clear from the way they bantered and interrupted each other during a chat with The Credits. The interview, which has been edited for length and clarity, began with Schlosser's explaining that he never considers a film adaptation as he constructs a book.

Schlosser: When I'm writing, I'm shutting out any possibility, not of Robby —

Kenner: [laughs] You don't have a picture of me on your desk?

Schlosser: I devote my mental energy entirely to trying to write something that is worth reading from the upper left hand corner of the first page to the lower right corner of the last hand. Robby read the book when it came out, and he was interested. We'd worked together, and we have a real shorthand in our conversations. So it just made sense.

Kenner: It was an amazing story that Eric wrote. The challenge was, how do you make it a movie? Here's this incredible incident, and why didn't we know about it? What I found footage of, was people talking on the national news about the missile that blew up. But there was never the recognition that the warhead could blow up. And take out Arkansas and much of the Eastern seaboard.

There was some amazing footage, but not quite enough. It was gaining access to the only missile silo in the world that was an exact duplicate of that Damascus one that enabled us to go make what is, in a funny way, a techno-thriller. This film is very different than Food, Inc. There I was inspired by Eric's book, and then went to find stories. This was very much taking Eric's book, interviewing the characters, and shooting almost a Hollywood movie.

I'm interested in how the movie was constructed. Did you put together the available footage, and then figure out what you needed?

Kenner: Yeah. We simultaneously did all those interviews. Everybody connected to Damascus in Eric's book except Gen. Leavitt, [who hated the book and wouldn't talk]. Then I found a few other people where I needed help, because there's a different process between writing the book and doing the film. So I might need a few voices. I couldn't just use Powell; it was very helpful to have Plumb as well. So we did the interviews, and in effect scripted those interviews —

Schlosser: When you say "scripted," once the interviews were done, you were able to put them together. We weren't telling them, "Now Dave, say this."

Kenner: Right. Obviously everything is 100 percent in their own words. We were constructing what was the real-life story of what transpired, though their eyes. And then simultaneously searching *everywhere* for every piece of footage. We had Skip Rutherford, who's in the film, scouring all of Arkansas for us to find everything.

Shooting in that silo was an incredible experience. It was the most amazing location you could ever hope for. Everywhere you put a camera, it's fascinating. You knew you had a movie the minute you walked into that place.

It's a missile museum outside of Tucson, Arizona. Well worth your readers going to check it out.

I know, by the way, that it doesn't work to tell interviewees what you want them to say.

Schlosser: Yeah. In Robby's case, he had a much difficult time than I did. Because I spent hours with these guys. Or I spent hours on the phone. Robby had to get people who'd probably never been interviewed on camera before, on a set, with lights, to be very revealing of themselves. For most of these guys, it's the worst thing that ever happened to them in their life. Something that 36 years later is still a source of pain. For me, the real power of the film comes from those interviews, and comes from the way Robby treated them with great respect. It's an art to be able to capture that on screen.

Kenner: But I have an outline of what these people think from your book. That said, the difference on film is that it comes down to how someone says something. It's not the information. It's the presentation.

Schlosser: It's fascinating for me, working with Robby, because we really share so much of a sensibility —

Kenner: But our techniques are so different.

Schlosser: Watching him work, and how I work, it's just the difference in the mediums. One of the reasons we've made these films together is that, in a deeper way, we see eye to eye. Our tastes, except in clothes, are very similar.

Kenner: [laughs] As a journalist, you have to accumulate information, and your questions are important. As a filmmaker, questions should be short and almost imprecise, to get somebody to give complete answers. And also to connect to their emotions is very important.

Schlosser: I don't want to praise you too much in front of somebody else. [Kenner laughs] But I think what's significant about this film is that it's a thriller, but the human element is in many ways the most important. The poignance of what happened to these guys.

Kenner: Something that Eric says a lot, which I think is really interesting, is that this is about the most important subject no one's talking about. I grew up ducking under desks, practicing protecting from a nuclear explosion. In the '80s, we got very concerned, and we actually changed the world [and reduced American and Soviet nuclear stockpiles].

Today, as Harold Brown says in the film, the weapons are safe, but the fact that we're not thinking about them makes them more dangerous. Beside the perversely entertaining nature of this film, its goal is to get us thinking about a subject that has sort of disappeared.

Schlosser: The official number is 32. If you look closely at that list, a significant number of those accidents did not involve a fully assembled weapon. So there was no chance of a nuclear detonation. But through the Freedom of Information Act, I got a document that listed more than 1,000 incidents just between the years 1950 and 1968. When I gave that document to Bob Peurifoy, who's in the film — and who has oversight of all of our nuclear weapons, ultimately — he hadn't heard of a great many of those accidents.

I read that you got more pushback from Fast Food Nation than from this book.

Schlosser: I was very concerned as I was doing the research that there'd be a knock at the door. And my computer would be taken, or something like that. So I had multiple hard drives encrypted and hidden away. It was very gratifying that the response was different. It was an invitation to talk about these issues from some of the people who are running our nuclear weapons complex today.

Robby found the same thing when doing Merchants of Doubt. When you criticize large corporations in the United States, you are putting yourself at real jeopardy. After Food Inc. came out, we found out that Monsanto had hired Blackwater to collect information on people who were criticizing Monsanto. I don't know that either of us was spied upon, but there are legal things that are being done to people who criticize these companies, and maybe also some borderline things. Environmental groups have been infiltrated by corporate spies, and McDonald's was using corporate spies against its critics in England. But the government — which in the paranoid thrillers of the '70s was always spying on you or hunting you down — seems much more open and willing to discuss these problems than these companies.

I'm intrigued by the fact that Fast Food Nation became two movies, with two different approaches. Before Food Inc., Richard Linklater did a fictional version of Fast Food Nation. How do you compare the experiences of those two?

Kenner: Should I leave? [laughs]

Schlosser: The director of the documentary was a total asshole. No, they were both really incredible experiences. I got to work with two great directors, and got two friendships out of it. Rick Linklater is really one of the great living American feature filmmakers. And Robby's not bad.

I started out as a playwright before I was writing nonfiction. I wrote a screenplay and worked for a film company before I ever started doing journalism. What it taught me is that there's no one way to look at a subject. I write books, and that's my way of dealing with it. And Rick Linklater makes feature films, and Robby makes documentaries. They're all equally valid ways to do it. I really enjoy when other people find something in my work that inspires some other work based on it.

One thing that's really striking about what happened at the Damascus silo is that there's a nuclear warhead atop what seems to be an extremely volatile missile. It seems strange to keep a warhead permanently on something that can explode that easily.

Schlosser: I don't know if somebody said this in an interview with Robby, but it's in the book: It was basically a bomb on top of a bomb. The difference today is that our missiles use solid fuel, not liquid fuel, which is much less vulnerable to that sort of accident. But there are other things that can go wrong to them today.

Kenner: There've been vast improvements in the technology. But what happened in Damascus is still happening in different forms. Even though the rockets are much safer, these accidents continue to happen. The story we told in the movie is a microcosm of an issue that goes to this day. On some levels, it's not a historical film.