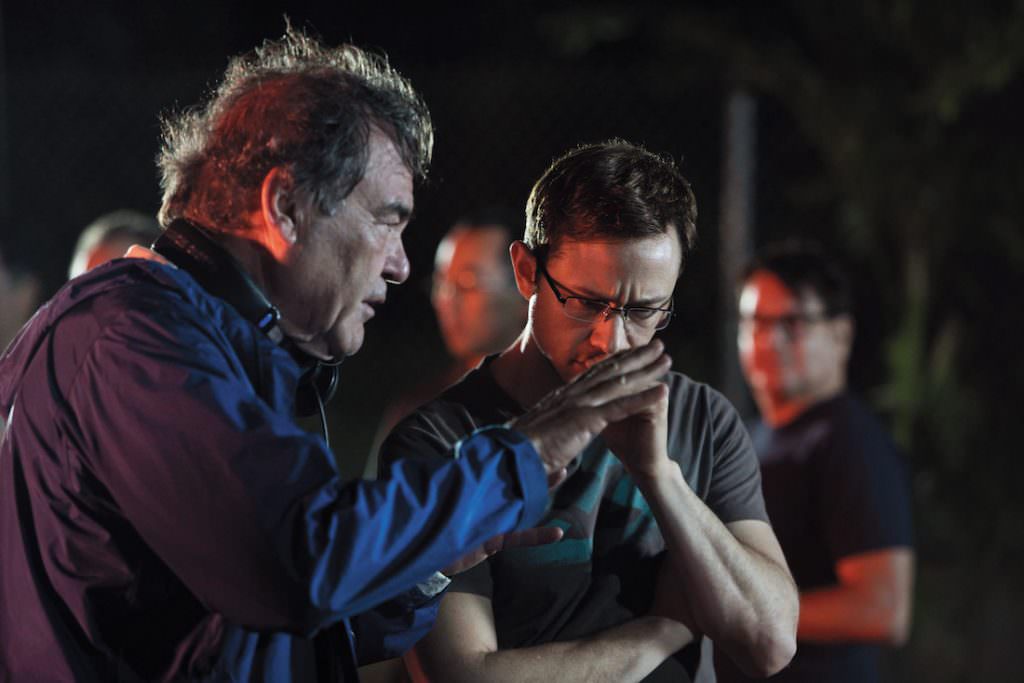 When director Oliver Stone shares his take on NSA whistle-blower Edward Snowden in Snowden (opening Sept. 16), he'll be adding one more chapter to an Oscar-laden body of work that dramatizes the dark side of American experience with uncanny precision. Inspired by Stone movies like Platoon, Born on the Fourth of July, Wall Street and JFK, Pulitzer Prize nominated critic Matt Zoller Seitz drilled into the auteur's life and work  to produce massive new picture book "The Oliver Stone Experience" (Abrams).

Over the course of six years, Seitz met with the pugnacious filmmaker nearly two dozen times to collect 100 hours of interview material. As he got to know Stone, Seitz says, “The biggest surprise for me was how emotionally vulnerable Oliver is. He can be extremely sentimental, he’s quick to anger, he often feels misunderstood and for a guy who’s been in the business for 40 years, he takes rejection very hard.”

Seitz witnessed that rejection first hand when Hollywood studios suddenly withdrew funding for Snowden. "Oliver was supposed to start filming in just two months so he really had to scramble,” says Seitz. But Stone persevered. "Snowden is very much of a piece with a lot of his films from the '80s and '90s," Seitz says. I think Snowden could be a great companion piece to Born on the Fourth of July in that both are about a patriotic and politically conservative young man who goes to war with a considerable set of values and comes out on the other side with a completely different set of values."

Excerpted from "The Oliver Stone Experience," the director talks about drugs, actors walking off the set, Woody Harrelson's face and getting hacked. 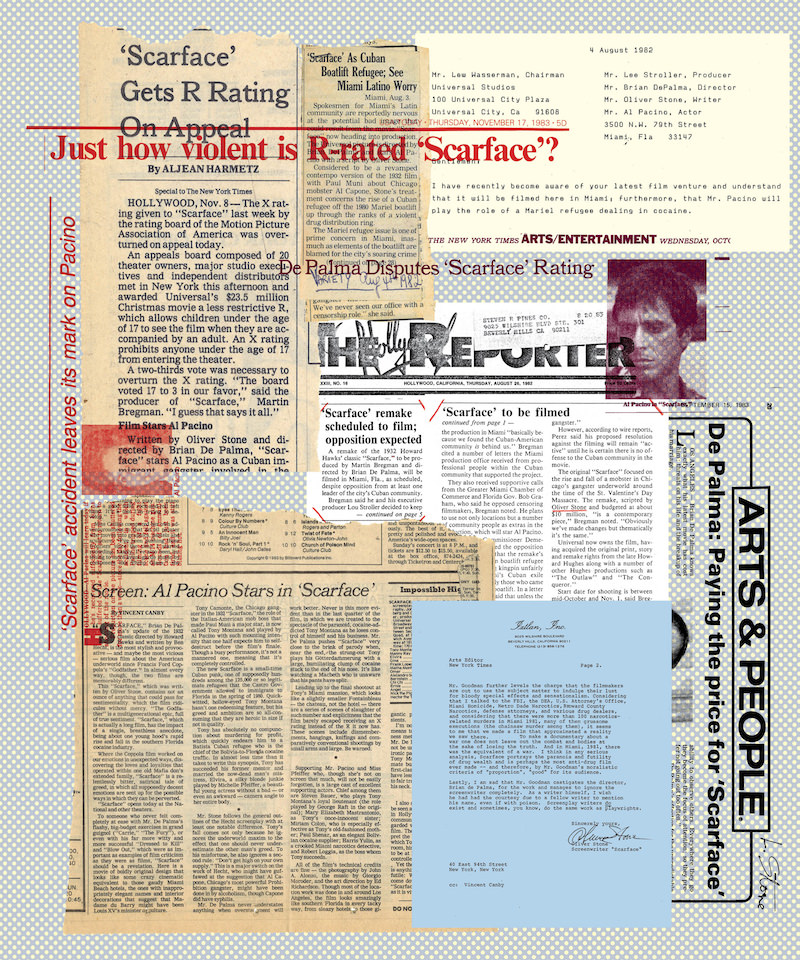 "Tony Montana was an animal," Stone says. "That’s what was beautiful about him. The picture is about appetite, and I had that appetite, that madness. I don’t think my writing benefited from cocaine, but I did write Scarface completely sober. The research was done stoned, but it allowed me an insight into cocaine!" 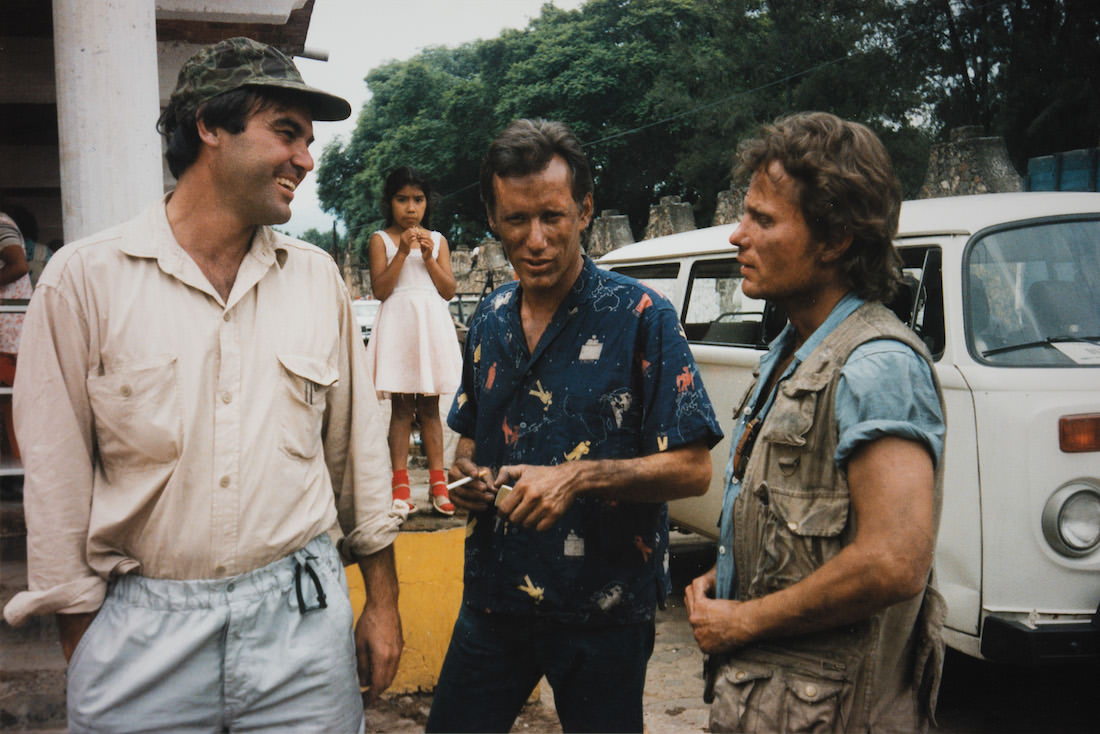 Stone shot Salvador (1986) in Mexico with the brilliant but volatile James Woods as a scrappy photojournalist entangled in a brutal civil war.

"Jimmy and I were almost killing each other," Stone recalls. "One day he walked off the set, on foot, into the Mexican wilderness…I called all the cops and said, 'There’s a lunatic loose on the roads! Recoup him for us!' So we had cops looking for him to bring him back as a madman! He walked for about an hour and a half along the road some fucking place, and we finally got him back. Every day with Jimmy was rocky. We were like two madmen in a Cuisinart, he said.”

“We had limited digital effects then," Stone explains "All the extras were real people. At the last concert, the AD asked, 'Who wants to take your clothes off? Go over there!' All these hands shoot up! We had too many volunteers to take their clothes off, because they were on LSD! We didn’t know! They were doing drugs, living the seventies vibe again!"

Stone worked star Val Kilmer to the point of exhaustion. "Val committed totally. He had charisma, he was handsome, and Val’s a very good actor…At the end of the shoot, he said, 'You don’t know how to direct,' at the last wrap party. That’s a nice way to end the film! But it made me feel bad, you know?"

"Woody’s not bland," Stone says. "He’s got a smile of a wicked baby…And Juliette Lewis has malice in her eyes. She’s got adorable eyes, but they jump and they gleam. Woody would come onto the set and he’d [say] 'Hi, buddy, how’s it going? You taking good care of yourself today? … And fucking Juliette would go, SHUT THE FUCK UP! Smoking a cigarette. She loved everything artificial and unnatural, stayed up all night, and was tense, and Woody’s Mr. Relaxed! But they were playing lovers, so it worked."

"Josh got hives, because he was very nervous about the role," Stone says. "But we waited him out. He did a great job because was able to create the two-dimensional aspect…I love George W. Bush. He’s a two-dimensional character, he doesn’t have any depth at all, and he’s quite happy that way."

Stone continues, "George Bush got elected because a lot of people thought he was a nice guy. They thought they’d rather have a beer with him than Al Gore…I don’t like nice-guy culture. Ours is not a nice-guy culture! We’re a bad-guy culture! We’re badasses! Like Elias says in Platoon, we kick ass all over the world. Loudly we kick ass, and quietly we kick ass! We squeeze other countries’ throats economically and do anything we can to get our own way. And the whole time, we pretend that we’re nice guys."

After studios changed their minds about financing Snowden, Stone had good reason to be paranoid as he prepped his film.

"We always had code names, and we tried to stay off phones and avoid talking about things openly," Stone recalls. "We became coded in our language. That was the nature of being with Ed, too. Ed’s into calligraphy and cryptology. All our communications were hidden through Pretty Good Privacy, or some equivalent. [Associate producer] Janet Lee did a great job of securing the script, which was always sent around in different formats and broken up. Actors would get secret codes to open iPads at a certain time for a certain hour and amount of time. We kept off the Internet. We took great precautions with the script. You have to realize that that script was worth something if it was leaked. It would’ve been a bounty, because it’s about the major hacker in the world, so these people are very smart…I was hacked several times."