The idea was an inspired one. Novelist, screenwriter and TV creator Jonathan Ames, the man behind HBO's beloved (but short-lived) detective comedy Bored to Death, got an email from his agent saying that Seth McFarlane was looking to create a comedy for Sir Patrick Stewart. Stewart had proven his comedic chops by lending his voice to several episodes of McFardland's Family Guy, and now the budding mogul wanted to create a whole show around the legendary British thespian and movie star. Enter Ames. The night before he was to have the call, something serendipitious happened.

"That night I was watching CNN and saw Piers Morgan, and I had this idea that Patrick Stewart could be a news anchor, and we could live behind the scenes, like The Larry Sanders show. I spoke to Seth, he liked it, presented it to Patrick Stewart, then he signed off on me. So the rest was, Okay, I have this character, so then where do I begin? Once I’d stayed at the Susnet Tower hotel, I was enamored with the bar, and I was thinking of this character and this predictament…a man at the bar hitting rock bottom. So it was kind of response to an assignment."

The first thing I noticed, and adored, about Blunt Talk was that it took a relationship from my favorite of Ames' novels, "Wake Up, Sir!,  and put it on that screen. The central relationship in the book is between an alcoholic writer, Alain Blair, and his fastidious, seemingly omnipresent valet Jeeves. The book was P.G. Wodehouse for the new millenium, an irresisitbly funny story about alcoholism, delusion and thwarted ambition. It also mixed in romance! And existential dread. And an unforgettable image of a rat crawling up Blair's leg that confused both rodent and man. Mostly, it was about the platonic love affair between Alan and Jeeves. I read it twice. 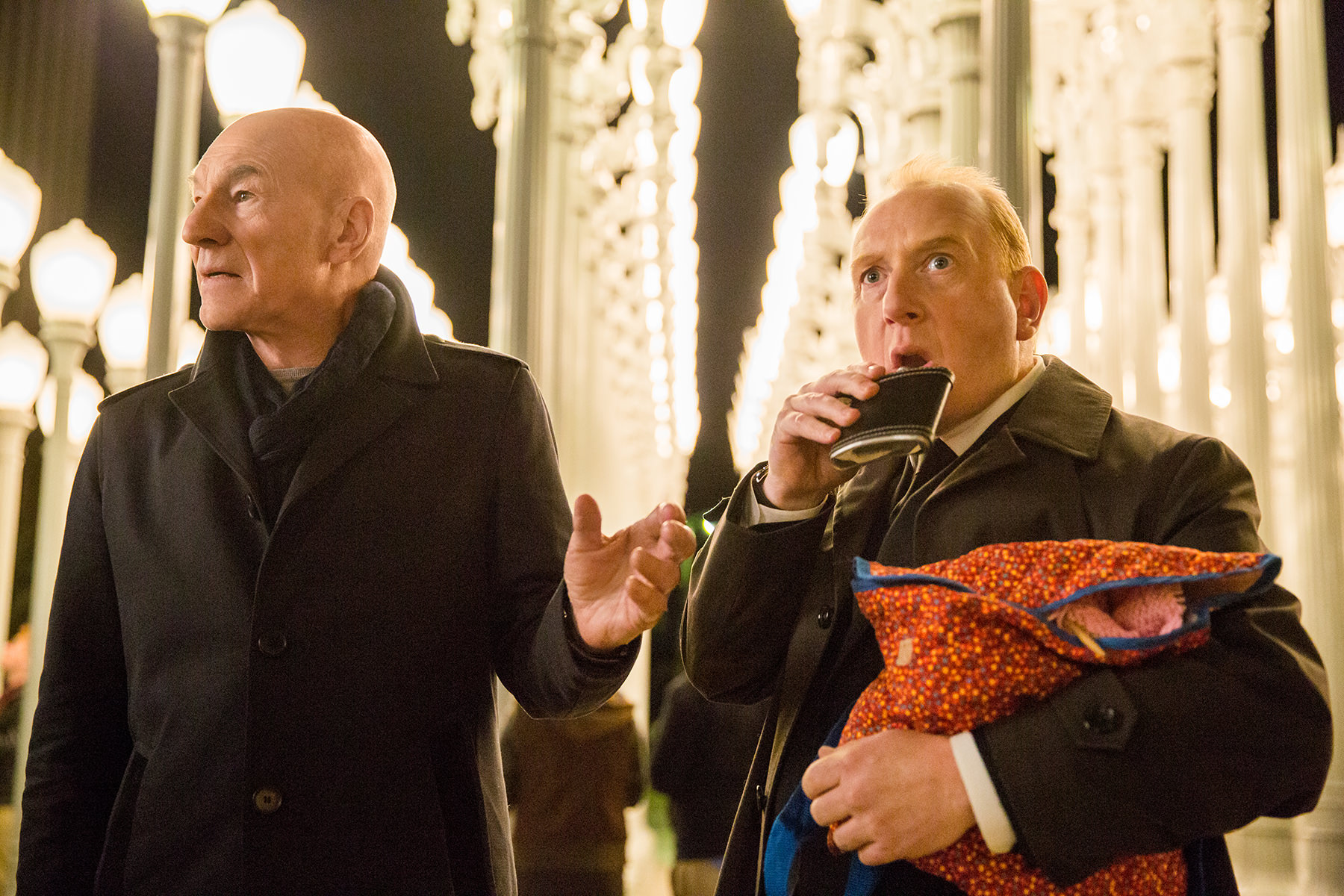 In Blunt Talk, Stewart is Walter Blunt, a hard drinking British ex-pat who has settled in Los Angeles and is ready to take over the world of American cable news by storm. (A fun aside; Sir Walter Blunt is the name of a minor character in Shakespeare's Henry IV, Part 1, which was Stewart's first role with the Royal Shakespeare Company.) It's Piers Morgan with the appetites of a late prime Peter O'Toole. Blunt's surrounded by fellow dysfunctionals, including his news staff (the cast is aces, we'll get to them in a bit), network bosses, ex-wives and children, assorted Los Angeles riff raff, and…his best friend Harry (Adrian Scarborough). Harry is his one source of unwavering empathy and concern. He is also Blunt's valet.

"It certainly wasn't mandatory reading, but they [Stewart and Scarborough] both generously read it," Ames says of "Wake Up, Sir!"

We're on the phone, Ames is out in L.A., and I ask him how much of "Wake Up, Sir!" inspired his original concept of Blunt Talk.

"With that first script, I was drawing on many different things I’d done, so it was a little bit of a Frankenstein, and I’d been trying for a while to write a film adaptation fo 'Wake Up, Sir!', so I put that character into Blunt Talk."

The relationship between Walter and Harry is the show's beating heart upon which all manner of mayhem swirls. Here's schedming, preening, unhinged Walter and his loyal, lovable valet, a Falklands War veteran and former Royal Marines lance corporal. It's a weirdly lovely relationship.

Working on Blunt Talk meant that Ames, a longtime New York resident, had to relocate to LA. He approved of his new lifestyle. 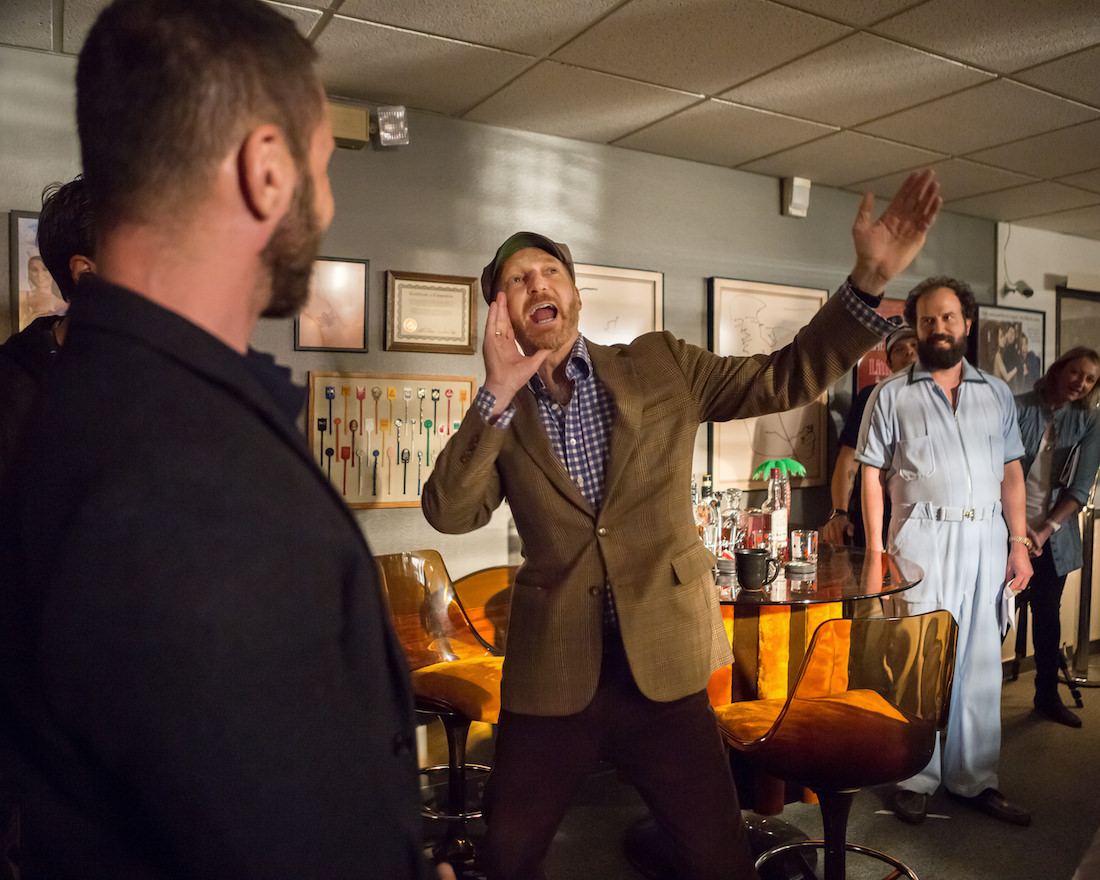 "I haven’t been in New York for almost two years. I like LA, I needed a change in my life. I moved here for Blunt Talk in August, 2014, and have been working on the show, full time. It's been an eleven months out of the year sort of job, so I haven’t had a chance to return."

For a longstanding New Yorker, living on a hill, what he calls a "beautiful hill," with a swimmming pool, no less, is nothing to sneeze at. As for the show, season one enjoyed some nice reviews, but Ames is confident that the story they're telling in season two is a much bigger and far more ambitious. Having seen a few episodes already, I can attest to that. 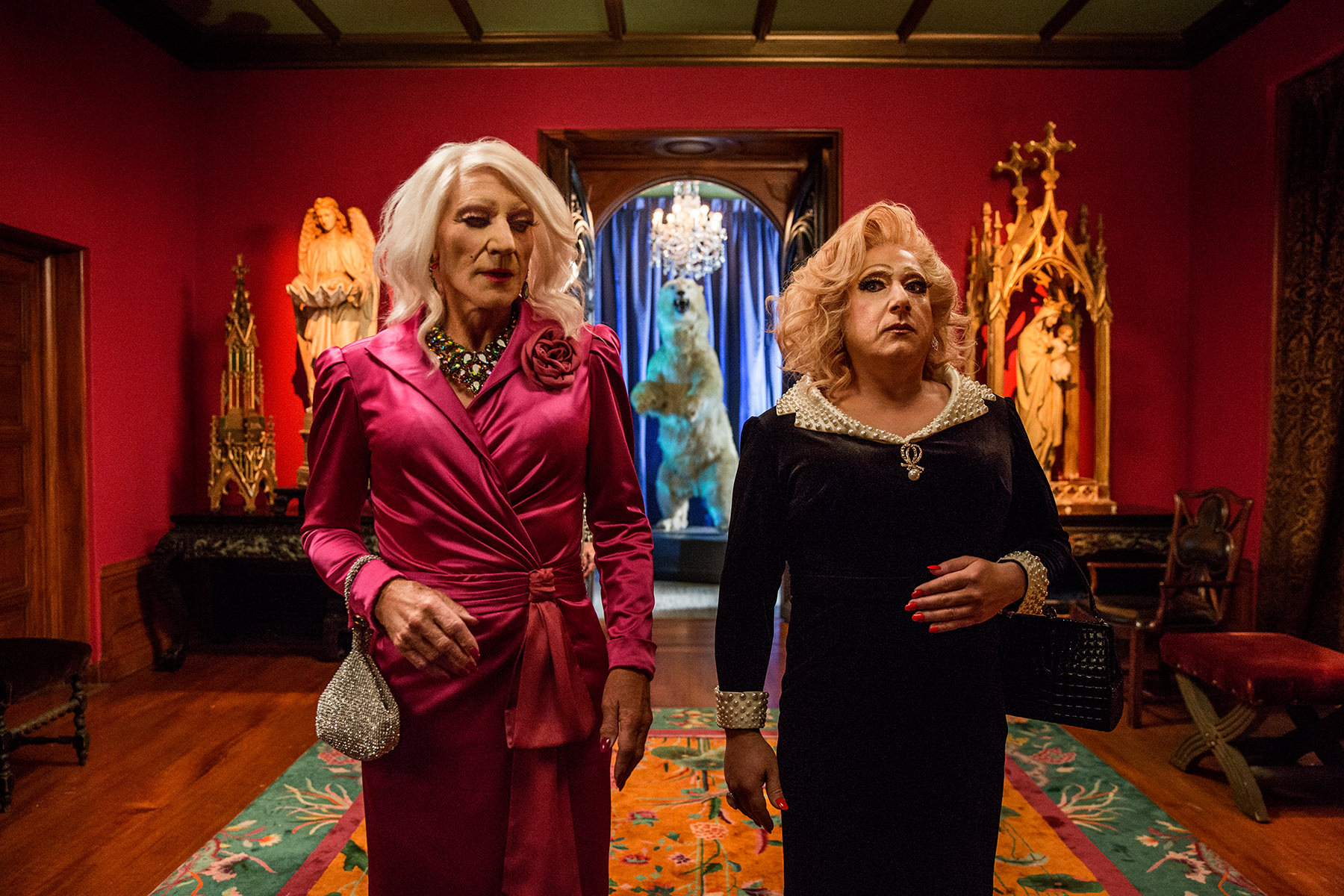 "In season two we're telling a serialized story, whereas last season there were serialized plotlines, but they tended to be more discrete stories each episode. This season was ten chapters of one very large story having to do with the drought in Los Angeles and Walter taking on the story of the drought. It's a bit of a Chinatown homage. It’s more of an allusion and bringing back this story of LA and water and power and corruption. If you notice, we shot at Echo Park lake, which is where Jake Gittes (played by Jack Nicholson) was famously in the boat following Mulray (played by John Huston), and I guess there’s a John Huston-like figure, so it’s an homage and allusion, and it’s a relevant story and a good story for a newsman for be to pursuing."

Ames did a ton of heavy lifting for season one, creating all the characters from scratch and writing the first four episodes without ever getting a chance to hear any actors say his lines. Now, having had a chance to work with his cast, he wrote season two with their voices in his head.

"I knew how better to write fo the actors, so that was a big change. So really trying to come up with a story that we would tell in mild cliff hanger fashion over ten episodes was this season's big challenge."

Ames is very hands on about casting, which you get to be when you're the showrunner and executive producer. This is partly why Bored to Death was so beloved. Jason Schwartzman as the writer-turned-amateur sleuth (named Jonathan Ames), Zach Galifianakis as Ray, a comic book artist and his best friend, and Ted Danson as George, the haughty, delightfully libertine editor of the magazine Edition were perfectly cast. Although the show only lasted two seasons, it's remembered for being very well written and acted, which are two things Blunt Talk has in spades.

"Like with Bored to Death, I select every actor," Ames says. "The casting people suggest actors and put them in front of me, then I went with the ones I responded to. I once heard this quote from Lillian Gish, something like 'Movies are about faces and music.' So I look for interesting faces, interesting human beings, and people who make me laugh. So it’s a very important part of it all."

Those interesting faces include the unbeateable Jackie Weaver as Walter's maternal manager Rosalie Winter, a great turn from Dolly Wells as Walter's ambitious producer, Celia, Tim Sharp as Jim Stone, a member of his staff that has to go to, shall we say deep lengths in season two in a ratings ploy, Romany Malco as Walter's boss, Bob Gardner, Richard Lewis as Dr. Weiss, Walter's psychiatrist, and a crazy number of hilarious guest stars.

"We’ve been very lucky with guest stars, too. This year we have quite a few; Stacy Keach, Fred Armisen, Brent Gelman, Lesley Ann Warren. A lot of fun people. And we've got a great casting agent, Gina McCarthy."

About that ratings ploy the members of Walter's team engage in season two…it involves Celia coming up with a "great" idea, using her co-worker and love interest, Jim, as her guinea pig. When I watched it, I find myself laughing and squirming, and asked Ames why what I was watching seemed to so real.

“That was an actual colonoscopy,” Ames told me. It's Painfully Hilarious, caps intended.

Season two really is ambitious, and not just rectally. This is a comedy, after all, with such a surfeit of acting talent you could have probably kept it mostly in the offices of Blunt Talk and had a blast. But season two not only riffs on the Polanski classic, it weaves in Chinatown-like plot twists, love intrigues and more.

"I don’t know if it’ll be as ingenious and dramatic as Chinatown, but there’s a twist or two," Ames says. "First and foremost we are a comedy, though."

Just like Bored to Death used real locations so it could actually be a New York show rather than a show set in New York but filmed elsewhere, Ames and the Blunt Talk team have made a very Los Angeles show. The Chinatown allusions aren't just relegated to plot details about water and corruption, but also in how Blunt Talk has been filmed in LA locations you don't usually see, or associate, with the Hollywood Sign or Rodeo Drive. This wasn't without its complications, however. 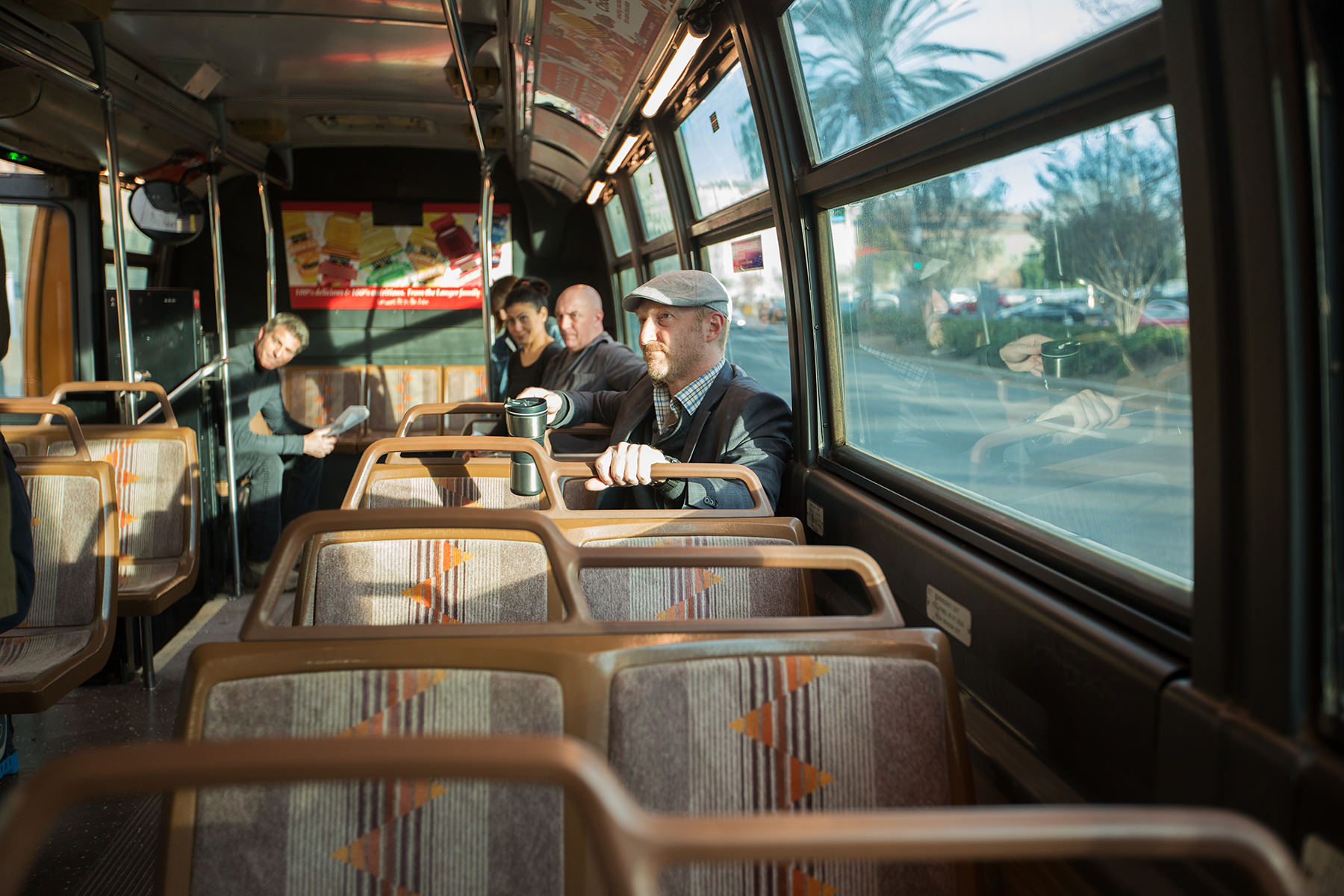 "TV's a visual medium, and for Bored to Death I really enjoyed exploring Brooklyn and filming Brooklyn and trying to capture it in a way that maybe it hadn’t. I loved created big images and being cinematic. So I brought the same thing to a show set in LA, but it’s more of a challenge than New York because you can’t move easily…it’s so spread out. In New York, you could base all your trucks on one street and shoot in three locations around it. Here in LA, if you’re going to go somewhere, it’s going to be one location, you can’t move because it’s going to be so spread out. In my budget, I’m allowed to shoot two days out of our studio on location, and inside for four days. I need twenty pages of material for our set, and maybe eight pages or less for outside. If we’re going to be outside, I want to choose beautiful spots. This year we’re in Malibu, beach, the canyon, at the Bradbury building they used in Blade Runner…I'm going to get my money’s worth."

Perhaps the most affecting thing about Blunt Talk is a central component to Ames' writing; the compassion that lies at the heart of the depravity. Like "Wake Up, Sir!" and Bored to Death, it manages to be sweet and dark simultaneously, interested in more than just people treating each other horribly. You could look at it as a show about difficult people trying to do right by each other and often failing. This resonates when so much of comedy these days is about people tearing each other down, friends behaving horribly towards one another, and a general baseline of hostility. I don't know about you, but I try to be kind and thoughtful to the people I care aebout—I just happen to fail a lot. That's what you'll find in Blunt Talk, a funny, dirty-minded, occasionally depraved show built around a world class actor who is also an Officer of the Order of the British Empire.

It almost sounds like the conceit to a Jonathan Ames story.