As you're no doubt well aware, the worlds of Batman v Superman and Suicide Squad are, of course, connected. BvS kicked off Warner Bros. big DC Comics film universe, breathing new life into Batman and Superman, setting the stage for Wonder Woman (Gal Gadot), and introducing us (briefly) to the Flash (Ezra Miller) and Aquaman (Jason Momoa). One brief but very loaded moment in that film involved Bruce Wayne taking a solemn moment to gaze at the suit of his former sidekick and mentee, Robin. On the suit, in bold yellow, is a spray painted taunt "Hahaha, Joke's on you BATMAN." 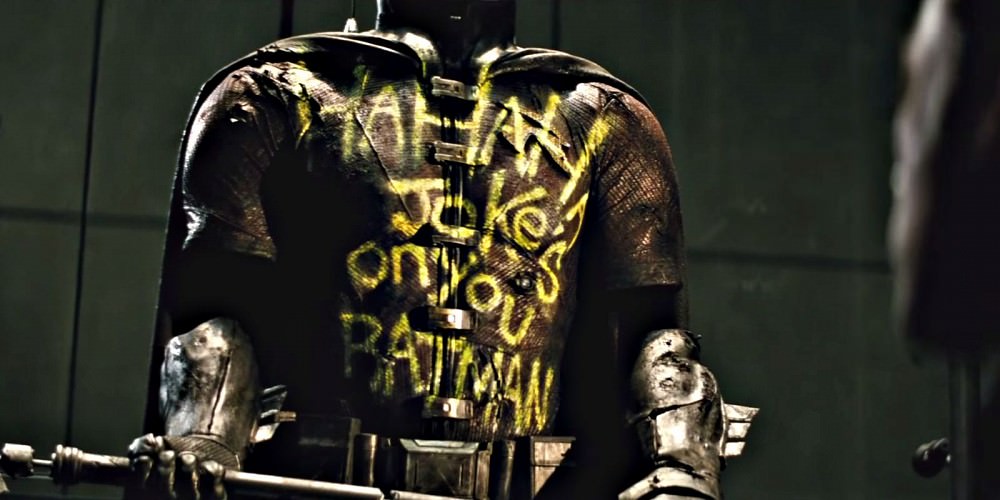 It doesn't take an advanced degree in DC villains to piece together who might have been responsible for Robin's death—a single glance at this kind of merciless, rub-your-nose-in-it nastiness is clearly the work of the Joker. Right?

Well, in a blink-and-you'll-miss-it Easter egg in David Ayer's supervillain romp (by the by; the film had the biggest August opening in history, so there's a decent chance you saw the film but missed the Easter egg), Robin's death was once again a plot point, only this time, his fate wasn't laid at the feet of the Joker. Nope, in a super brief flash of screen text, Robin's death was, at least in part, said to be the work of Harley Quinn.

Thanks to the folks at Screencrush, this little nugget was brought to our attention. When Quinn was introduced, as is the case for every character, the screen is filled with graphics listing their various crimes and skills. "The text vanishes so quickly that you might have missed this interesting fact in Harley Quinn’s bio: She claims responsibility for murdering Robin," Screencrush reports.

Now this doesn't mean the Joker wasn't also responsible—as we learn in Suicide Squad, he's a master manipulator who turned the once quite normal Quinn into a grinning, gleeful sociopath. She could be copping to a crime he committed, or, she could have taken part in it alongside her clown prince of chaos. While Robin's death might not be a huge storyline in the upcoming DC films like Justice League (and it surely has zero part of Wonder Woman, set long before Robin was born), it is an important part of DC comic lore. As Slashfilm writes, "Robin’s death was an important story arc that happened in “A Death in the Family” in 1988. However, in that story, it’s The Joker who is responsible for Batman’s sidekick’s death. Harley Quinn wasn’t even a character in the Batman universe until years later when she debuted in Batman: The Animated Series in the episode “The Joker’s Favor.”'

Regardless, Suicide Squad has made it clear that Harley Quinn had something to do with Robin's death—maybe we'll find out more when Margot Robbie takes up the role in a later film.