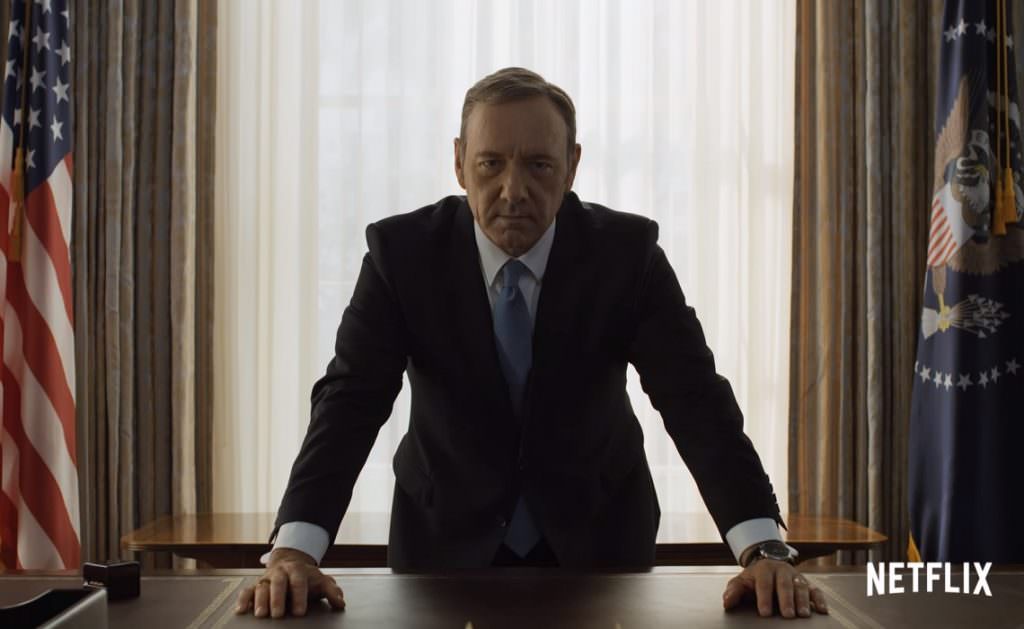 The Machiavellian machinations of Frank Underwood (Kevin Spacey) and his wife Claire (Robin Wright) are a large part of what make House of Cards so tantalizing. The ruthlessness of the Underwoods almost makes the real life greed and corruption in American politics seem tame by comparison. While most of the stories about the appeal of the show have largely focused on the fine performances of the leads, the deft writing and the delicious, demented soap opera version of politics on display, one of the most underrated aspects is how good it all looks.

One of the people who is primarily responsible for that look is production designer Steve Arnold. Arnold nabbed his third Emmy nomination for his work on the show, an impressive feat for anyone, and one made all the more admirable considering this Washington D.C. based series is shot primarily outside of Baltimore. Arnold has created incredibly life-like representations of some of the most iconic interiors in America, including the Oval Office and the House of Representatives chamber floor, and he's done so with great ingenuity and, as the rigors of television production demands, at top speed.

We spoke with Arnold about how he turned a gravel pit into the Jordan Valley desert, why the White House bathrooms are so small, his upcoming project with director David Fincher and more.

So how much pressure is on you to create exact replicas of these iconic interiors?

It is a little bit tricky because, because as a designer you always want to put a little stamp of your personality or signature on something, but, with sets like these that are so well known, you can't really do that. One tricky one in particular last year was for the State of the Union. We had to build a portion of the House of Representatives chamber floor, which is a huge room. When you watch the State of the Union, you see how many people are in that room. We managed to cheat that a bit. We copied the chamber as close as we possibly could from photographs, but it’s still a massive challenge. We work our little movie magic and are able to pull something like that off.

I imagine the Oval Office was also one you had a lot of pressure to get right.

The Oval Office is so iconic, I even get letters from viewers who write in ask, 'Why did you pick this particular Grandfather’s clock, when the one Obama uses is different?' We actually picked the clock that Eisenhowser had. There’s a bunch of furniture the White House has in its stable, like the Resolute Desk, which Kennedy brought back into the Oval Office for the first time. It was a gift from England [Queen Victoria gave it to Rutherford B. Hayes in 1880, to be precise], and now it’s this iconic desk. So yeah, it was a bit of a challenge.

Did you get to scout the White House at all?

The White House interior is pretty much off limits, you can’t go upstairs where the president actually lives, but there was quite a bit of research done, of course. It had been chronicled in the early 90s, so we found photographs of what it’s really like, but we also took liberties, made the kitchen larger, made the bathroom larger for the master bath, and since nobody can really see that save for the Obamas, I think we can get away with it.

The White House bathrooms are small?

Yeah, they're quite small. Obviously the White House was built hundreds of years ago, and bathrooms weren’t really designed into the overall space, so a lot of rooms were divided so half of one would be a bathroom. And we worked hard on the family kitchen, which is also small. We worked off photographs of Gerald Ford making a bagel in a toaster in the family kitchen, and it was very, very small.

What other challenges did you have for this past season of the show?

We had to go to other parts of the world, to China and the Middle East, and we were doing that all within the confines of Baltimore, pretty much. We used a gravel pit for the desert, we turned it into the Jordan Valley, and it came off quite well. It does not seem like you're twelve miles from downtown Baltimore when you’re seeing it.

How'd you turn a gravel pit into a desert valley?

We found an area that’s quite expansive, with big hills of gravel, and there were these areas were dug down, where they’d excavated where we were below the tree line. So we built some roads, we built a structure that was supposed to be a Russian compound, we brought in some fencing, some sand, and we worked on it until it seemed like a dry and dusty desert. Also we shot it after a big rain storm, so that was a big problem; the pit was filling up in places, so we put in drainage culverts to divert the water.

How long do you have to pull this kind of construction off?

We don’t have long to do this stuff. It’s a serious scramble, we shoot two episodes concurrently because it’s more efficient to use sets that way. If you’re in the Oval Office in two episodes, you do all of that at the same time, so you combine those two chunks of work. I always joke that I’m usually caring around six scripts; the two we’re shooting now, the ones we’re preparing for, and then I’m reading the next two so I know what’s coming down the road. It’s a scramble, and much different from working on a film with one script, one story, and you can focus all your energy on that. This is a little bit more crazy.

Your next project is with David Fincher. What can you tell us about it?

I’m working on David Fincher’s next televisions series, a period FBI story set in the 70s. It’s very dark and very picturesque, but I think it’s going to be very cool. It’s called Mindhunter, based on a book by a guy who came in after Hoover had left and created a behavioral science unit. It’s not his life story, but it’s modeled after that. The beginning of that portion of the FBI that was a little more cerebral.

I guess when Fincher calls, you have to answer.

I worked on 50 episodes of House of Cards, but yeah, when David Fincher calls, you kind of feel bad turning down. This is in the Zodiac ballpark world, a bit. Fincher has a very, very strong visual style and stamp that goes on everything, so his influence is very strong. We are both, shall we say, very meticulous.

Where is Mindhunter being filmed?

We’re in Pittsburgh, shooting this Fincher show here. It’s a fantastic city, I went to Carnegie Mellon, so I know the city quite well, it’s got some fantastic locations.