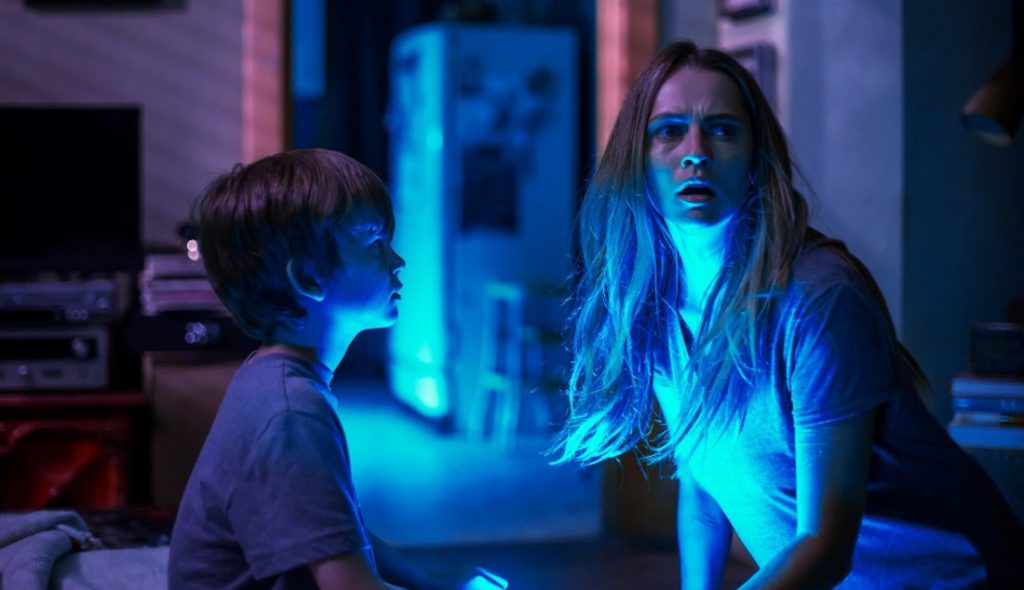 The 2014 short version of Lights Out teased a primal horror hook grounded in universal fear: people freak out in total darkness. After director David F. Sandberg uploaded his YouTube mini-thriller about a monster who pops up when the lights go out, the clip attracted 3.2 million views and caught the notice of Hollywood producers. When they enlisted screenplay writer Eric Heisserer to expand the short, he faced a daunting question: how do you stretch a two-minute, 41-second premise into a full-length feature?

For Lights Out, which opened Friday, Heisserer found his footing by writing a character-driven drama.

Then, he added the monster.

"First and foremost, it was important for me to build this movie as a drama about a dysfunctional family," says Heisserer, whose credits include Final Destination 5 and the 2010 remake of A Nightmare on Elm Street. "In my first draft, which I didn't show anybody, I only wrote interactions between the characters."

Maria Bello, Teresa Palmer and young Gabriel Bateman star as a moody mother doing battle with her antagonistic daughter and gentle son within the confines of a spooky house. "Once all those character arcs tracked for me emotionally, I went back to all the moments that were tense with emotional friction between mother and daughter, or between siblings, or boyfriend and girlfriend. That's where I added the scares. Lights Out at that point went from a 70-page character drama to a 90-something page horror movie."

Inspired by one of director Sandberg’s ideas, Heisserer added meat to the thematic bone by making the "Diana" monster a manifestation of manic depression for Bello’s unstable mom character Sophie. "David saw Diana thematically as a metaphor for mental illness and clinical depression, which really got me excited," Heisserer. "When you have a theme like that, you can always sort of touch that wall to remind yourself of the larger picture as you design the scares.”

Real science also offered Heisserer a fresh way to make "Diana" more plausible. "I wanted to build a monster that wasn't just a demon or a ghost," he explains. "We've been inundated with that kind of evil in so many horror stories. For me, I've always been most scared by the creepy kinds of things I used to see on The Twilight Zone or Outer Limits, which quite often had their origins in science or science fiction."

For Lights Out Heisserer devised a backstory informed by a actual treatment for mental illness known as heliotherapy. "When I went down the research K-hole, I discovered that light therapy is a real thing that was practiced to get people over certain mental illnesses. We brought in historical photos and old lamps used for that kind of therapeutic approach. Then it made sense that we find our first iteration of Diana in a mental hospital, where psychologists try light therapy on this girl who's very sensitive to light."

Heisserer's interest in science is more than a passing fancy. Son of a  Oklahoma University ancient history professor, he joined NASA straight out of high school to contribute his self-taught computer skills to the Agency's space exploration efforts. There, his brainiac colleagues turned out to be an interesting bunch, especially when they started drinking. "Whenever one of our proposals got approved, there'd be a big party and a whole bunch of booze,” Heisserer recalls. "After a couple of hours, I'd hear these really drunk, incredibly smart astrophysicists going 'You know if aliens invaded, this is how it would go.' I thought, 'Oh my god this is amazing.' That's when I got the itch to be a sci-fi writer."

A devote of futurist fiction author William Gibson, Heisserer initially wrote for table top role playing game Cyber Punk before shifting focus to graphic novels and horror screenplays. Entrenched in Hollywood's supernatural thriller industry since 2004 when he moved to Los Angeles, Heisserer sees the genre moving away from extreme gore, given the current climate of real-world terror. Noting that Lights Out, which exceeded box office expectations in its opening weekend, boasts a relatively low body count, Heisserer says, "I think horror has gotten a lot more intelligent. You can't build a movie any more where the characters are naïve jerks and you cheer when they die. These days audiences now demand more from their characters. It's more fun to root for them now than it is to root for the monster that's coming after them."