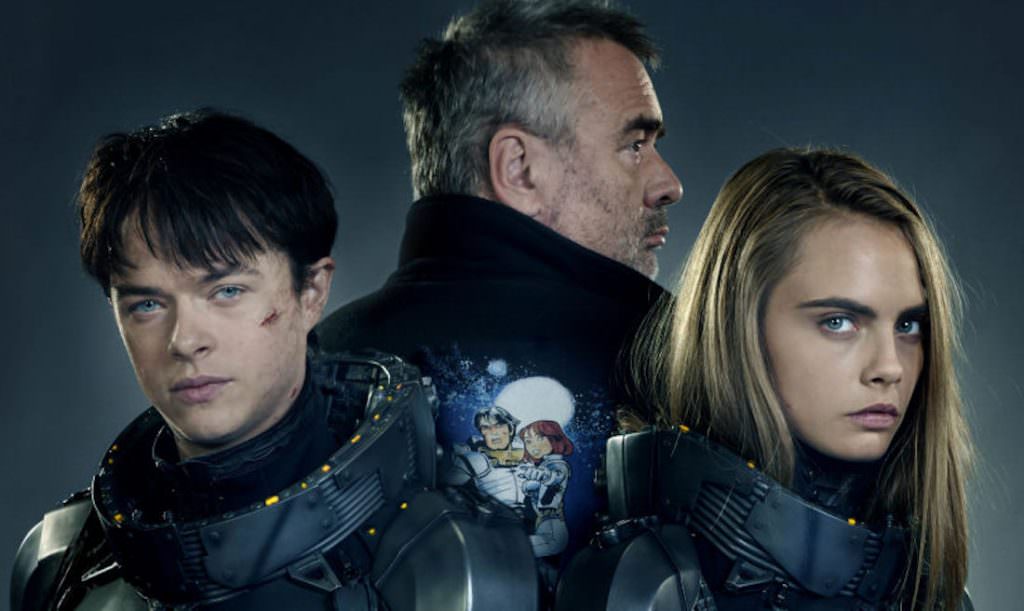 French director Luc Besson made his first-ever Comic-Con appearance to talk about his 2017 release, Valerian and the City of a Thousand Planets.  Presented with Comic-Con’s highest accolade, the Inkpot award, he insisted on handing it back — temporarily.  “Let me show you some of the film, and then you can decide if I should keep this,” he told the crowd of over 6000, which was soon roaring its approval.

Besson is a fanboy favorite for his dynamic action scenes and for the wildly imaginative 1997 film The Fifth Element, which turns out to have a Valerian connection.  The film is based on a series of comic books that Besson first read when he was 10 years old. As new issues came out, 29 in all, “I basically grow with it,” he told us.  It’s a space adventure story that inspired the look and storyline of films like Star Wars and Avatar.  When Besson directed The Fifth Element, he brought in artist Jean-Claude Mézières, who helped him create the look of the film.

At that time, making a movie version of Valerian seemed impossible.  “It’s 90% aliens and two thirds of the film is in space.”  But he bought the rights anyway, just in case, and now that technology has made it possible, the dream project became a reality.  James Cameron invited him on the set of Avatar, which helped him to develop his thinking on how to approach such a heavily CGI-project and gave him a standard to strive for. “It’s like racing Usain Bolt,” he said. “I might not win, but you’re going to feel my breath on your back.”  There are more than 2700 effects shots including 290 species of alien. He compared it to shooting The Fifth Element 20 years ago, when he had to make 25 passes with the camera.  We got a sense of the level of CGI in the film when a cosplayer in the audience asked for tips to create a Valerian costume for next year and heard that “most of the people in the film are wearing grey suits with dots."

Virginie Besson-Silla, Besson’s producer (and wife), presented concept art that was stunningly beautiful.  And we got to see some thrilling but still very rough footage. Stars Dane DeHaan and Cara Delevingne, who joined the panel to talk about making the film. DeHaan described Valerian as “a space bro,” and Delevingne said her character is “extremely strong, independent, hard-working, and has done the homework Valerian has not done.”  In a clip we saw, she disarmed and incapacitated two guards by asking them to put her in handcuffs.  We also got a glimpse of a co-star, Rihanna.  “When I told my friends about the part she plays,” DeHaan said, “their jaws were on the floor and they were so jealous.”  He told us he got his start in acting by dressing up as a superhero as a child. In working out to get in shape for the role he said he also got some insight into Valerian’s character. “It put me into the mindset.”

Besson was clearly delighted to bring his childhood passion to life, and he loved being in a room of 6000 fantasy fans.  “20 years ago, I was weird.  Now the world has caught up to my weirdness."