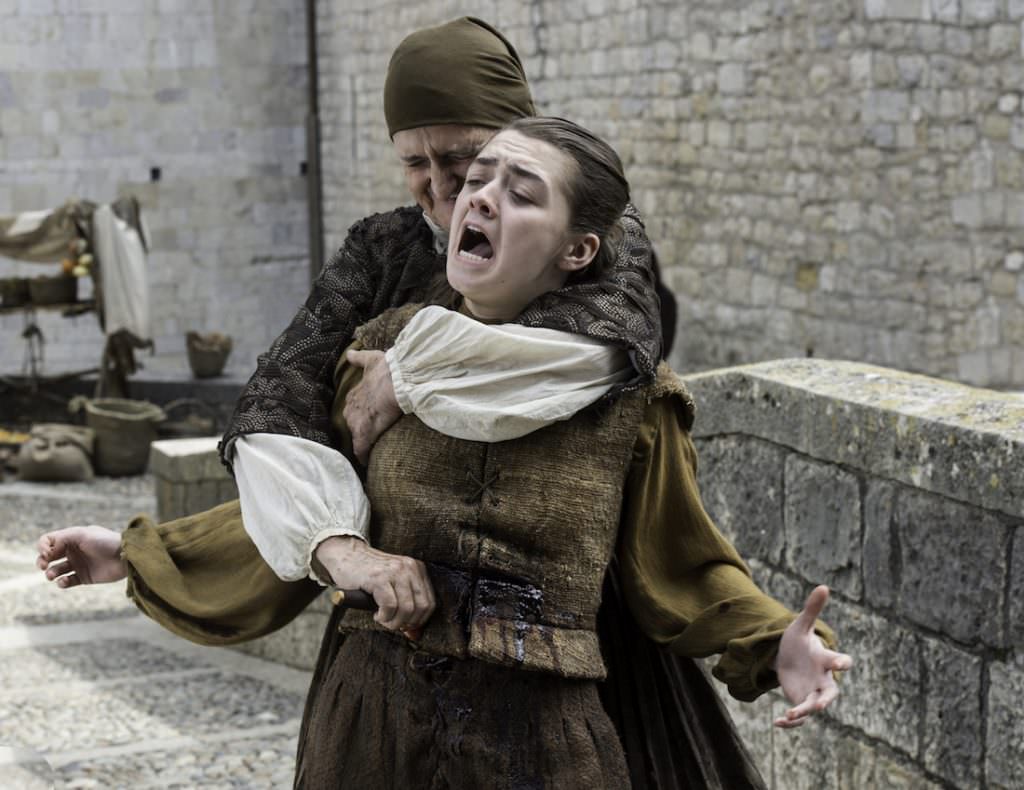 Was a Secret Character Hidden in Last Week’s Episode of Game of Thrones?

At the 1:04 mark in the "Inside the Episode" featurette below, you'll revisit the moment in "The Broken Man" when three members of the "Brotherhood Without Banners" come upon the Hound's new family of sorts, Septon Ray (Ian McShane) and his peaceful followers. The man in the middle of these three is who we have our eye on; note his yellow-ish cloak. We'll come back to this. The arrival of the Brotherhood is an important moment in the episode regardless, as by the time the credits roll, Ray and his followers have all been massacred, and the Hound's grabbed his axe and is off for revenge. But that man in the yellow-ish cloak might be an important piece of the entire series.

Thanks to good people at i09, this brief scene with that man in particular has been potentially revealed to be the introduction of pretty significant character from the books, which would mean another huge character from the books is likely going to be in play. If you'll remember in our recap of the episode, we mentioned Lady Stoneheart. In the books, Lady Stoneheart is the resurrected Catelyn Stark, three days removed from her death at the Red Wedding, and the undead Catelyn wants one thing and one thing only; to kill every single person involved in, or merely tangentially associated with, the Red Wedding. Since "The Broken Man," theories have been circulating that Lady Stoneheart will make her appearance in Game of Thrones, only not as Catelyn, as Arya. It was Arya who was stabbed by the Waif in the episode (her fate left up in the air), and its been Arya whose been on a quest for revenge since season one.

Now, i09 has put some of the pieces together. The man in the yellow-ish cloak who is played by actor Jóhannes Haukur, and he tweeted this: 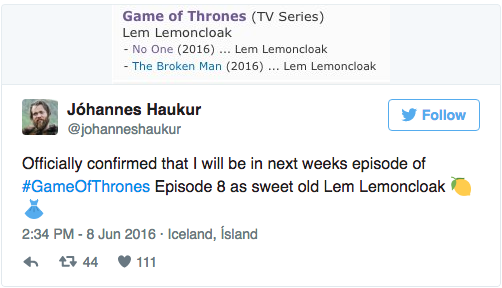 In the books, Lem Lemoncloak ends up answering to Lady Stoneheart, who takes over the Brotherhood Without Banners and goes hunting for Red Wedding plotters, planners, helpers, associates and more. Now, GoT has combined characters from the books into composites, and, used character names from the book without the storylines for those characters corresponding exactly, but, thus far, the theory of Lady Stoneheart making her appearance (either as Arya or someone else) in GoT just got a whole lot stronger considering one of her key soldiers appeared.

As i09's Rob Bricken writes; "I guess the Brotherhood Without Banners could be playing a role on the show without LSH appearing, but seriously, if she doesn’t, why bother including them at all? What narrative role do they serve except as introductions to and instruments of Lady Stoneheart’s vengeance?"

You could argue the Brotherhood has returned to the show to put the Hound back in play, but the fact they arrived in the same episode Arya was stabbed (like Catelyn was) and dumped in a river (as Catelyn was in the books, dumped into the Green Fork before she was dragged out by Arya Stark's direwolf, Nymeria) seems a little too coincidental. Yes, by episode's end Arya has dragged herself out of the river, but those are minor details. The major details remain; Lady Stoneheart's soldier Lem Lemoncloak has arrived and Arya is dying.

Our money's on the arrival of Lady Stoneheart, and the death of a whole lot of Freys, Lannisters and Boltons. Let's just hope she leaves Ramsay for Sansa.