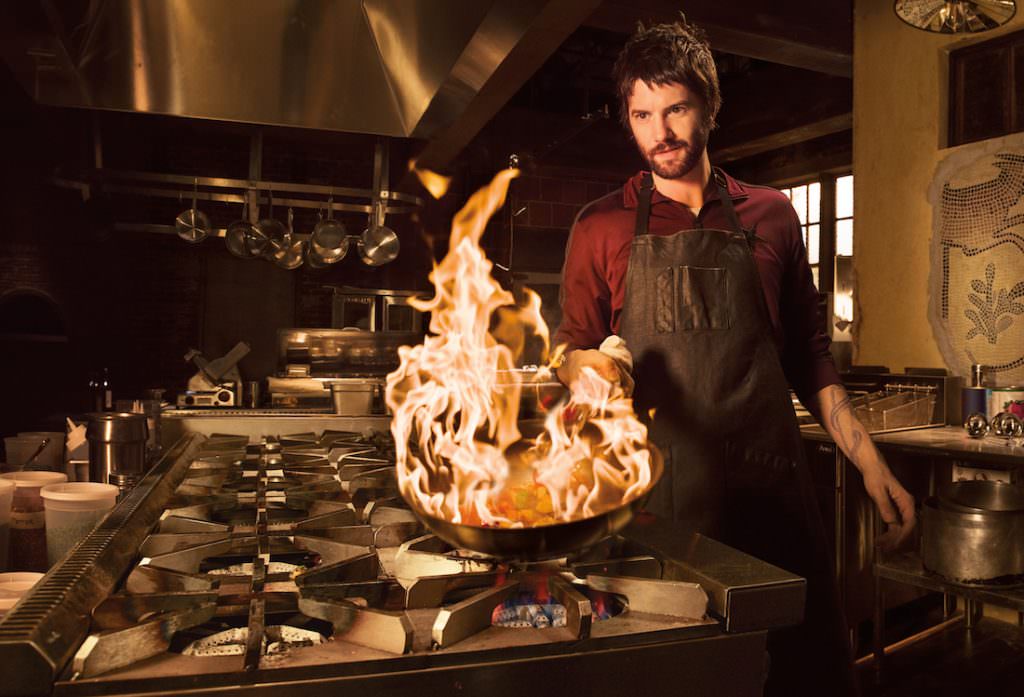 AMC touts its new David Schwimmer/Jim Sturgess drama Feed the Beast (debuting Sunday, June 5, at 10 pm ET) as a show that explores the "insanity of the New York restaurant world." It's a topic series consultant Harold Dieterle knows a lot about. After winning Bravo TV's Top Chef crown, the American Culinary Institute-trained New Yorker came out swinging in Manhattan's hyper-competitive fine dining scene, where he ran three critically acclaimed restaurants at the same time. "Being a chef is a very hectic lifestyle," says Dieterle, recruited by Feed the Beast executive producer Clyde Phillips to teach the cast how to talk and act like real cooks.

Dieterle notes that Sturgess, the British actor who plays temperamental chef Dion Patras, threw himself into the gig with full-bore intensity and came out the other end looking like a realistically exhausted restaurateur. "Jim was acting every single day during the week and on top of that, he did  promotional stuff on weekends," Dieterle recalls. "He worked two months straight without a break so he started developing bags under his eyes. I remember looking at him like 'Jim, you have no idea how close you are right now to being a chef who just opened a restaurant. You look terrible, you’re working thousands of hours —  this is as real as it gets, buddy."

Feed the Beast producers, adapting the Danish series Bankerot, relied on Deiterle to make sure the show's fictional kitchen staff bore some resemblance to actual cooks. "I focused on choreographing the cooking scenes to make them look as realistic as possible," says Diertele, who couldn’t help himself from screaming at one actor early in production when he mishandled a rack of lamb. "I also helped the writers to get down kitchen lingo like soigne. That's when you make the food really nice for a VIP. '86' means you're out of something, and then you always have to have the staff saying 'Oui chef' or 'Yes chef.'"

While Diertele reality-checked the dialogue and behavior for Feed the Beast cast members, the menu itself was created by food stylist Susan Spungen. She summarizes her creative brief in two words "Haute Hellenic." What exactly does that mean? "I wanted to avoid the typical clichés of Greek cooking," says Spungen, who learned to make picture-perfect food when she served as editorial director for Martha Stewart Living magazine. "We shot in Astoria Queens, which is rife with Greek restaurants. Anything you could get down the block just didn't seem like the right fit for Dion. He's a French trained chef who'd worked in an Italian restaurant so the menu was meant to be sort of pan-Mediterranean, or at least that’s where I decided to take it." 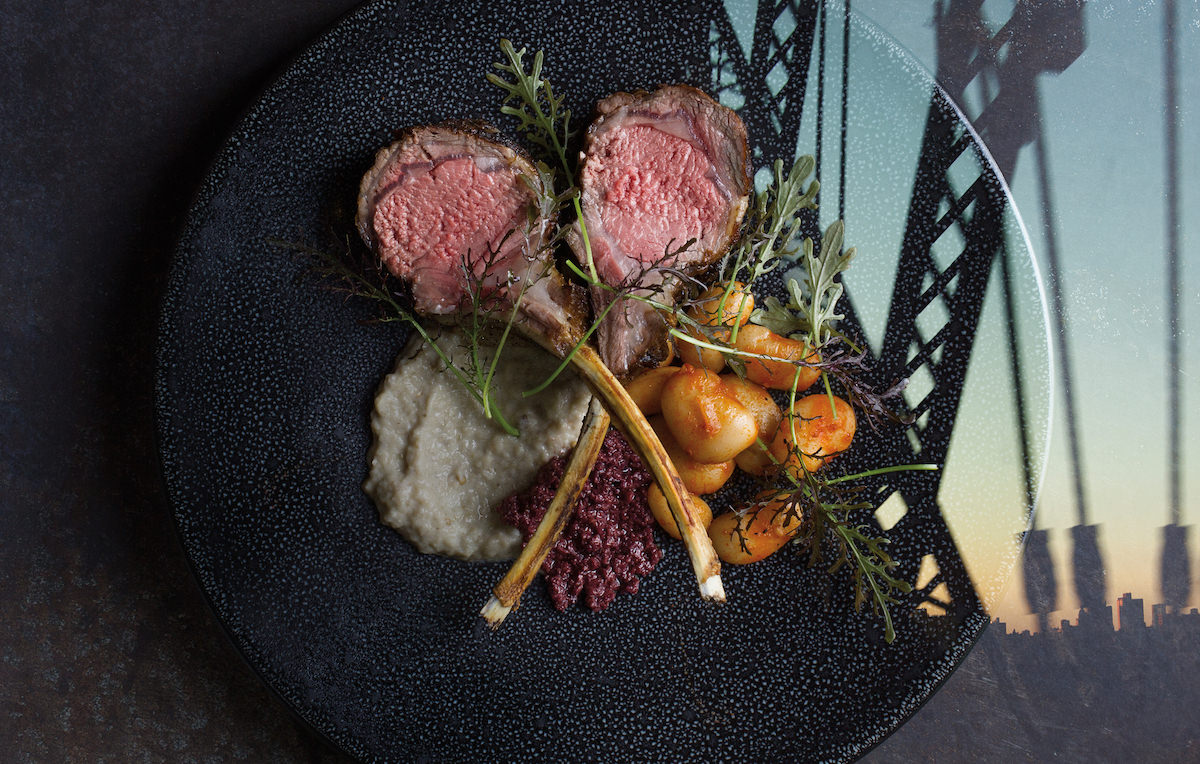 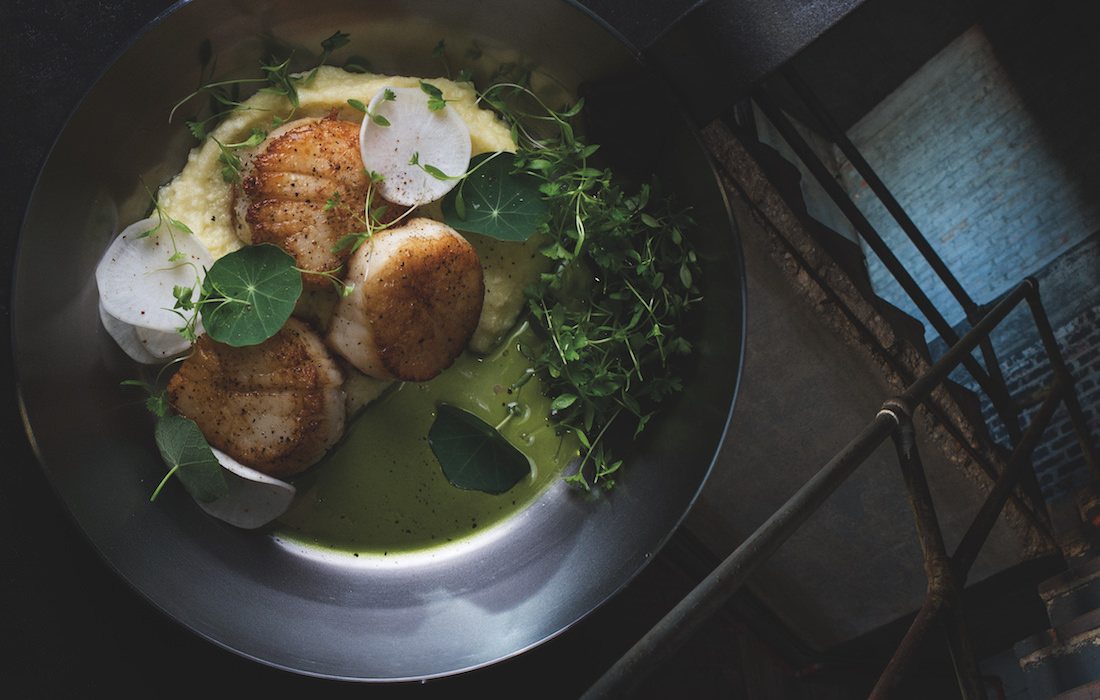 Spungen created about 20 dishes, including a homemade "Cypriot sausage" wrapped in caul fat and served with chickpeas. She singles out a giant double-cut pork chop as a dish that played particularly well to the camera. "We put this big thick bone down the center of the plate and piled the meat on high so it looked very strong," she says. "Honestly, the portion is so huge if you served it in a real restaurant, it would be a dish for two. But this is television! We were going for maximum impact."

When Spungen makes food look pretty for magazines, she uses tweezers, toothpicks, oil and spray bottles of Evian water to micro-manage the appearance of each dish. By contrast, food on television requires minimal primping. "In still photography, you can see the hair on a raspberry and study a close-up of the food as long as you want," Spungen says. "On a TV show, food has an extremely short time on camera."

So while the stars of Feed the Beast pretended to slave over a state-of-the-art gas range, Spungen says she did the actual cooking off screen on a "less than stellar" electric stove with an eye toward crafting culinary eye candy that "pops" on camera. "I focused on creating things that were instantly identifiable, rather than something where you look at the dish and wonder 'What it is?' On TV, food has to telegraph what it is right away."