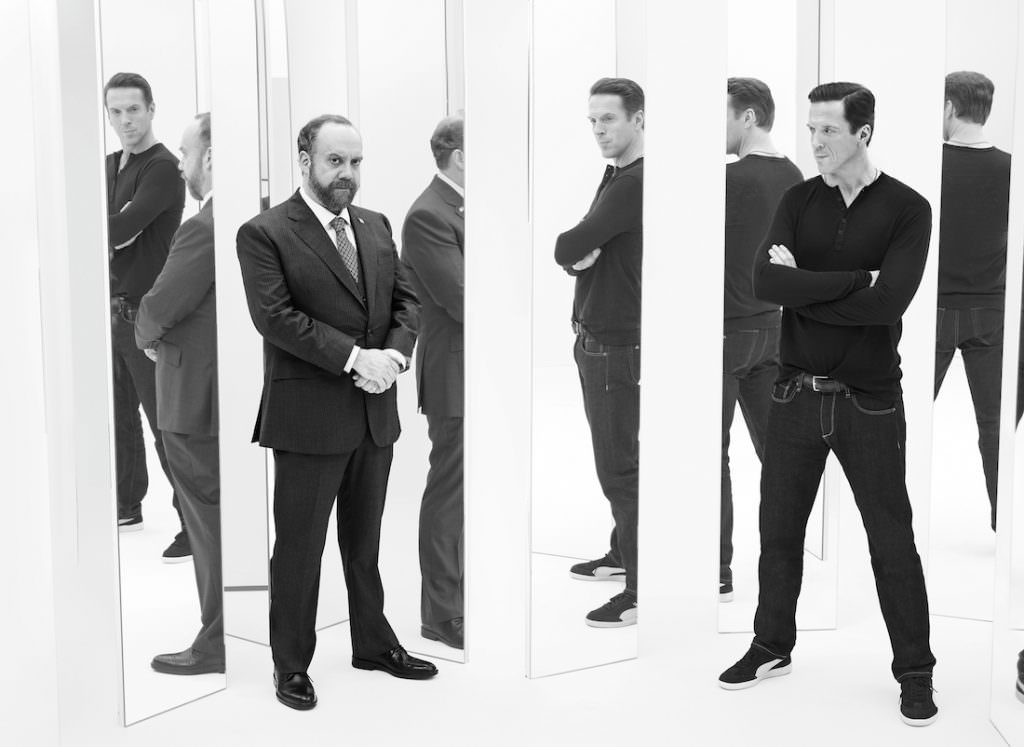 Eric Daman, the man who learned from the inimitable Patricia Field on Sex and the City and then went on to put his own distinctive stamp as a costume designer on shows like Gossip Girl and The Carrie Diaries, discusses his latest work on Billions and The Astronauts Wives Club.

Some people might be surprise to find out that the same costume designer who created the over-the-top style of Gossip Girl and The Carrie Diaries is also responsible for Billions. There is so much fleece!

Yes, luxurious high-end designer fleece, but there is fleece. It's a different world, which is kind of exciting. When I was first asked to interview for it, my agent was like, ‘This isn't apart of your brand DNA but I think you should go read on it just because of the caliber of the actors and the storyline.’ You know the fact that the Billions definitely has some cache to it. It's not just all fleece. Going into it, you know? It's not Silicon Valley. As long as we're in Manhattan and there're billions of dollars involved, I’m the guy to call. 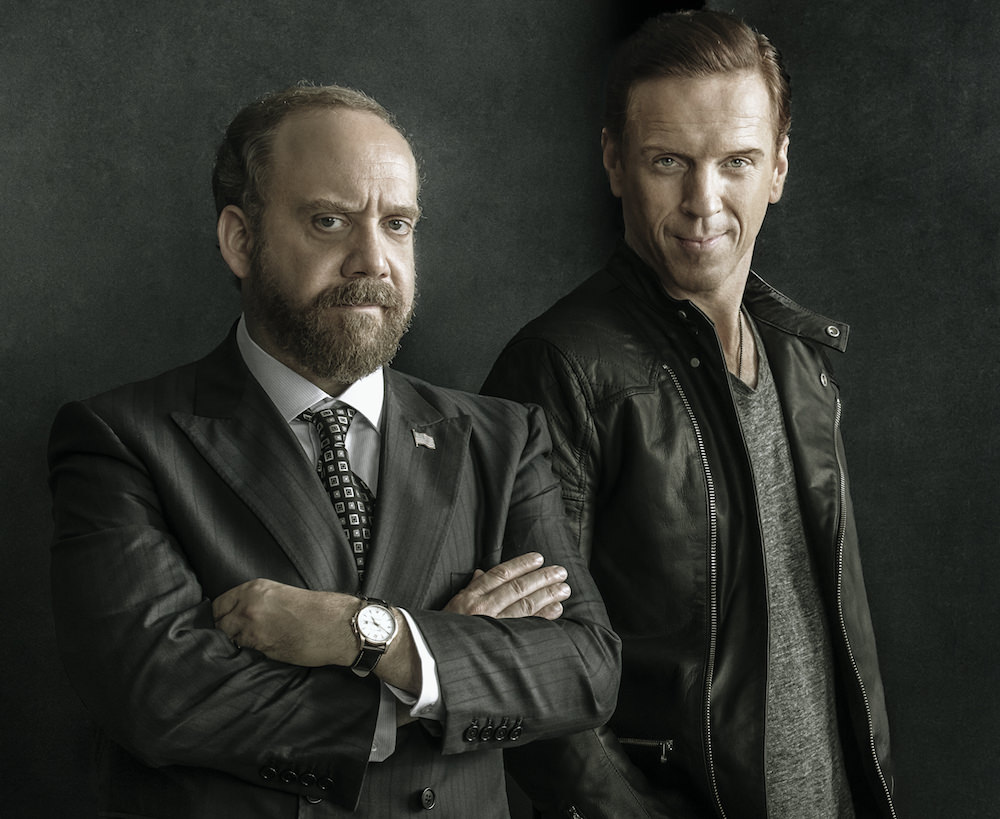 What was your inspiration for having the men who work at the hedge fund dress so casually? Did you go out and check out those kinds of environments?

Yeah, well for Damian's character, named Bobby Axelrod, when I first went in I had more of slick suit idea going in. He would be more a super hot, well-to-do, dandy and billionaire. The more I talk to the guys they were like, ‘No, we really want to keep it like the Americana, blue collar guy that's done his time with suits, who kind of does his own thing. Then it just kind of hit me. 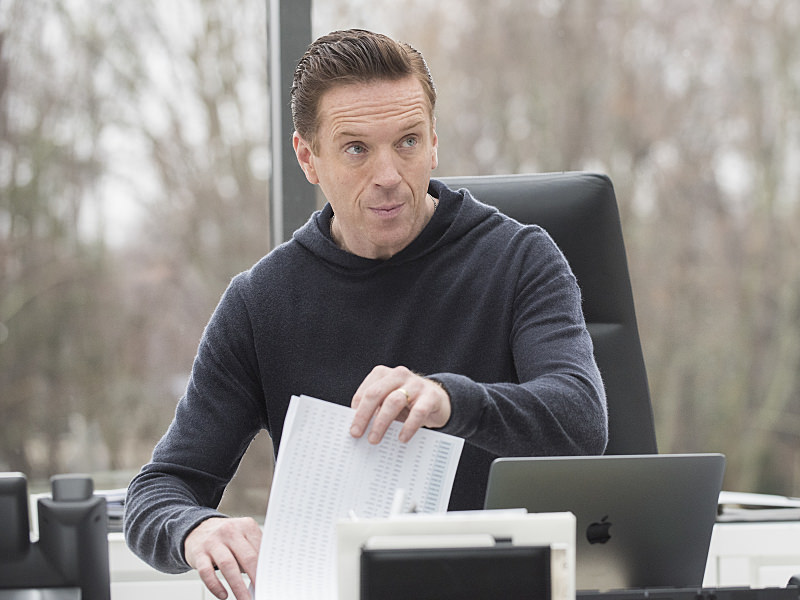 He's a maverick, so he's dressing like a maverick as well?

He is a maverick and I have coined that his style of dressing is aggressively casual. His power dress is the perfect t-shirt that fits him great and just gives him an edge over everybody else. Bobby doesn't have to play the ‘80s banker guy. He's a billionaire and he plays by his own rules. There's a moment when he does play into the suit, that suit look, and things don't go as well for him. He's back to his t-shirts and jeans, he's back to being a powerhouse. I thought it was a really cool way to kind of develop this new idea of what billionaires kind of do today. I don't think it is as stuffy. There's a new kind of man that is making this money who doesn't want to be in a suit and tie everyday.

Yeah, because they're beyond that.

They are beyond that, exactly. I feel like you know in his history that he's worked for other companies and that he had to do the suit and tie thing, kind of suck it up and do that. He's most comfortable in how he grew up which is this blue collar Yonkers, all American family. I think especially with Damian Lewis, that he is such a very handsome, almost like a runway model type. As soon as you start dressing him up, you get something very different, from this kind of all American bad boy. As soon as we put him in these really cool jeans and sneakers and t-shirts things, I think there was just this really great characterization that happened. 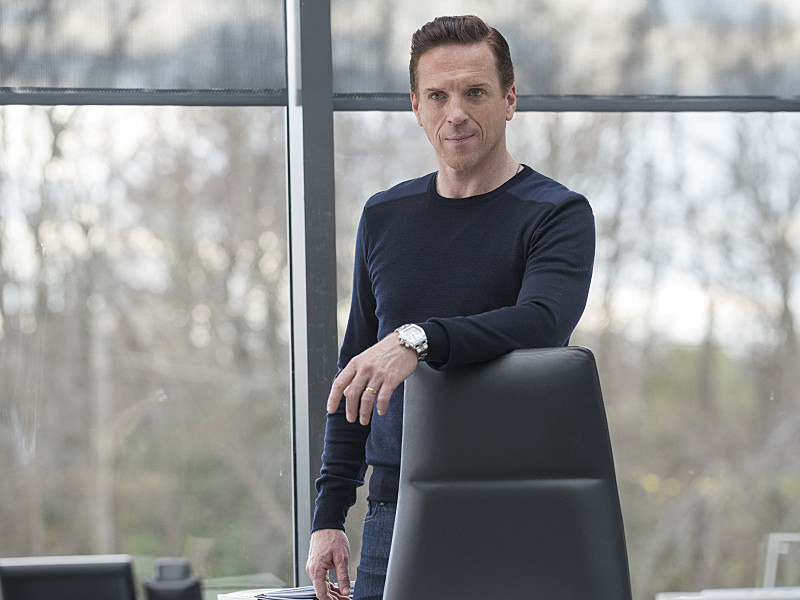 Wendy Rhoades sort of exists in the office as a kind of a counterpoint to that aggressively casual sort of aesthetic. How did you develop her very tailored look?

That's where you obviously got to have a little bit of fun with her outfits?

Exactly, and bringing that into the office where in a way that felt realistic but true to who she was in the bedroom, that she dominates that office. She walks in those Narciso Rodriguez dresses or dresses that are super sculpted and have an architectural feel. They're very, very expensive dresses. Wendy's making a lot of money. She knows where to put her money for her kids and for her future but also knows how to wear it well and use it to her advantage. That she's very clever and calculated in that way. 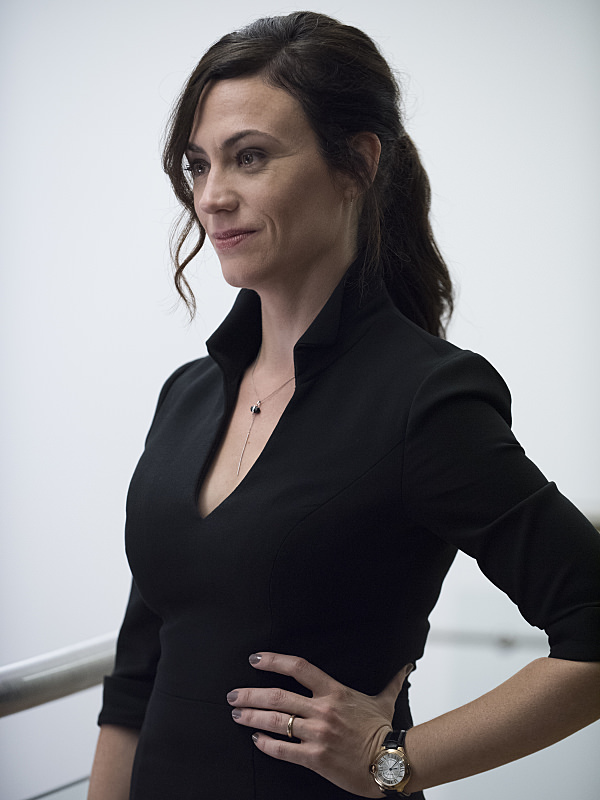 You used the details of the zippers and corseting etc. quite a lot as well as a nod to her secret S&M life.

Yes, exactly, there's a nod to the architecture that feels like the seaming in the corsets and there's zippers, there's grommets. Little details that are the nod to her secret other life; that feels fun, that's a bit of a tease. I think it eggs on her relationship with all these guys that she's counseling every day and kind of really gets them…not aroused…I think it's just a provocative statement that she's wearing these clothes with these guys and really commanding that ship. She's their therapist but she's also kind of a cheerleader in a way. I think it's great that she has the sensuality and this power to her.

Yeah, it's almost like a school mistress kind of role.

Exactly, it's the school mistress and the sexuality in that, using it as a power presence kind of way, not in just your obvious way, where it's all tits and ass. I think it's more about the unseen and the fact that you know that it's there that, there's that kind of tension to it.

Do you the actors weigh in much on their looks? How does that process work with you?

It's a process. Working with these actors has been very different. I'm usually working with a female ensemble cast. It's very fashion forward. It's been really different working with this caliber of actor. Also in a way as a costume designer for me, it's the process. I'm really there to help them create these characters. I want to give them the tools and make them feel as confident and comfortable in the role as possible. So there is a dialogue that goes on.

It's been really great with all of them, they're really into what they've brought to the table. Overall, they really look to me to be the designer and to help them become these people through the wardrobe. If something doesn't feel comfortable, if it's not right for a scene, that's fine, we move on and there're other options waiting for them. I think they were all so happy with the turn out. How their appearances really kind of reflect who their characters are and kind of help them establish themselves as well.

Are there any particular moments that stand out for you where the costumes were very integral to the plot point?

I feel like the first time we see Bobby Axelrod wear a suit and tie is when he goes in to face Paul Giamatti's character, the US Attorney. It’s their first face off. I feel like finding the perfect suit for that moment and tie combination was a big challenge. They wanted it to feel like he was being respectful to the place he was going and the business he was going to do with the US Attorney. Not trying to mock it and not trying to be too gregarious, or too ostentatious. Also to feel like a billion, to also be like, I'm worth way more, my suit is worth as much as your brownstone. 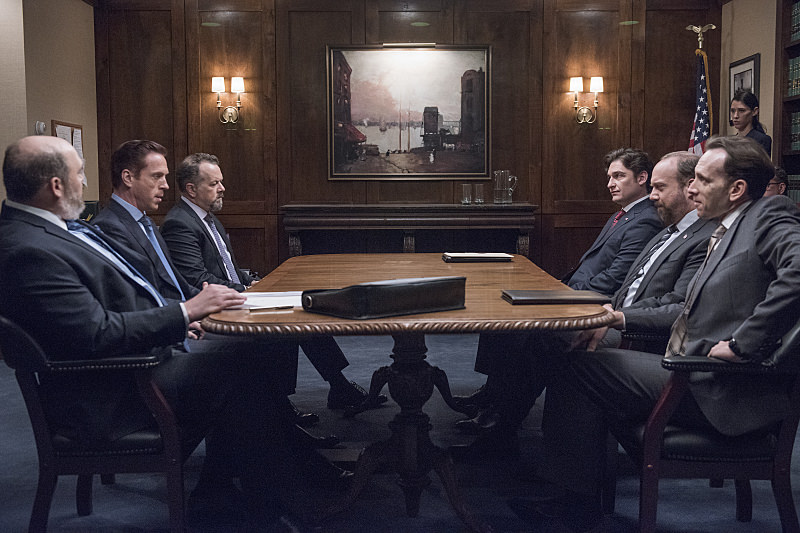 A sign of power, exactly. It's a power play but it had to have a nuance to it. We found it, it was this beautiful kind of blue pinstripe suit that's from a brand called Cifonelli at Barneys. It's a very, very expensive suit and it looked amazing on Damian. It had very powerful shoulders and had the presence that it needed to have but also kind of an old world, Saville Row, hand made Italian feel.

Is that satisfying moment when he slips that on and it really brings everything together?

Yes, there's like an ‘aha’ moment. You can tell, Damian knows clothes and when you slip something on him, he'd be like, ‘Oh, I know what I'm wearing and I feel like this guy.’ I mean there's the same thing when he puts on the T-shirts, it's kind of cool to see him morph, become this chameleon in these clothes. His reaction to it is also very, very cool.

How did develop the look for his nemesis, Paul Giamatti’s character, Chuck Rhoades?

The same thing with Paul. Paul is such a true actor: I think he really enjoys getting into the clothes and the characters. On the other hand, he is this custom made suit guy. I have all of his suits custom built. I thought that was important because he comes from old world money. He's been around that world. He knows what it means to have a custom suit. I think a lot of times when you think of Paul Giamatti, you don't think of him as this super powerful kind of in your face, well dressed man. For the series, we really wanted to give him a powerful presence, with very sharp edges, and make him look lean. Building these suits, we were really able to customize the shape of the shoulders and give him a three piece, so with a waistcoat, it kind of really trims him down. It almost corsets him in and gives him this strength. He's very aggressive and very in your face. Having been able to make custom suits, kind of design the silhouette around his body shape was really great and worked really well for the character. Paul loved it. He said he's never felt so powerful and confident before, so it was really great to hear that. 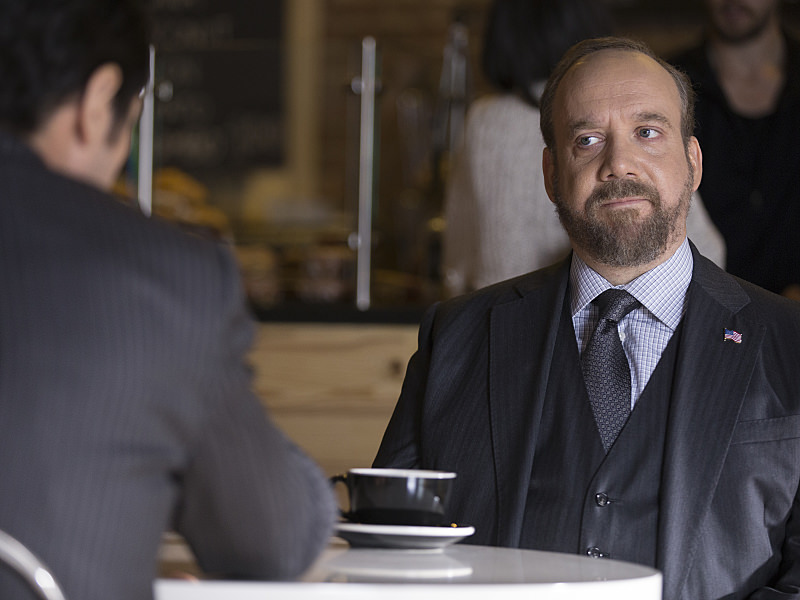