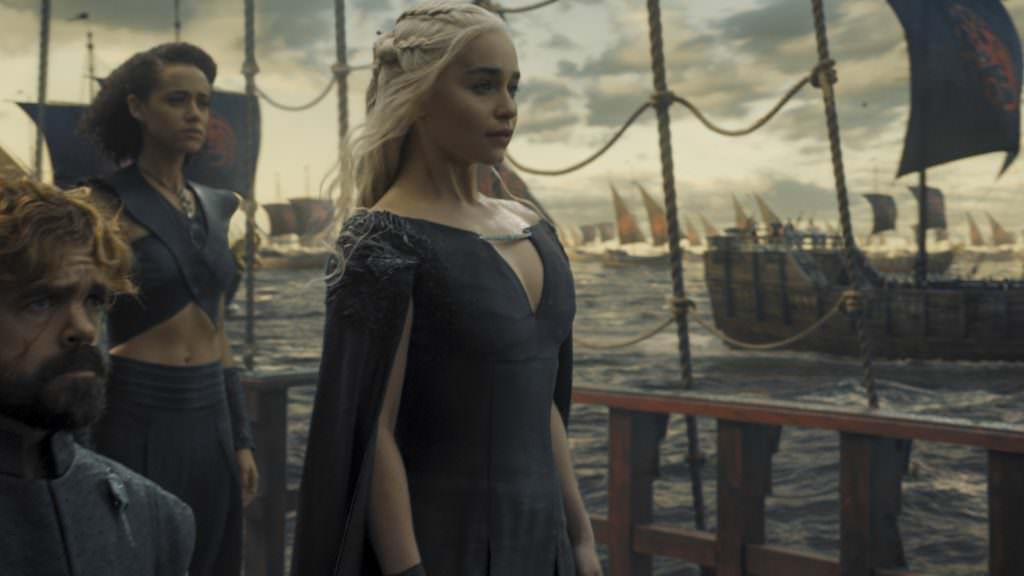 Game of Thrones Recap: “The Winds of Winter”

Game of Thrones has had it’s fair share of sadists (Ramsay, Joffery), murderers, rapists and undead killers, but after the season six finale, it now has its Queen of Overkill. Once again, Cersei Lannister has extracted revenge on her enemies in a move that begs the question; does she ever think about collateral damage, not just to her unintended victims (if there is such a thing for her), but the damage she might be doing to herself? But first, a nod to Cersei's ability to turn lemons into high flammable explosives. It was only in last week's episode that she learned she wouldn't be able to use the Mountain in a trial by combat, which up until that point was her one and only plan. Yet, a trial by combat would have merely freed her from the High Sparrow's perpetual nagging, it's unclear how it would have solved the problem of the High Sparrow and the Faith Militant themselves. But with that option taken away from her, Cersei manages a shocking, brutal display of mass carnage that does exactly what she'd always wanted: it wiped out all her enemies (in King’s Landing, at least) in a single, game changing explosion. The unintended consequences (for there are always unintended consequences, especially to Cersei's emotive, not especially intellectually rigorous actions) are that she might have alienated her one, and only, true supporter—Jaime Lannister. More on that later.

It was a breathtaking opening sequence, possibly the show’s most ambitious ever, that began quietly; all the major players who are heading to the Sept of Baelor for Loras and Cersei’s trial are getting dressed. You see the High Sparrow putting on his dusty, heavy robe; you see Tommen and Cersei, in separate quarters, donning their various jewels and crowns. You see Queen Margaery having the long braid in her hair prepared. And you even see Maester Pycelle putting on his heavy chain while a naked woman in his bed demands to be paid. It's a slow, patient opening, set to somber chamber music, and all the more affecting for what it portends; chaos.

Once the trial has begun and Loras has pledged fealty to the seven, all eyes to turn to who’s not there; Cersei and Tommen. As it becomes clear to Margaery (ah, clever Margaery, a woman who could have really gone places had she not had to reckon with the likes of Cersei Lannister) and to us that something is terribly wrong, director Miguel Sapochnik and showrunners and episode writers D.B. Weiss and David Benioff sustain an excruciatingly slow build to the violent climax. The outlines of what's about to happen finally become clear to you at the moment they become clear to a dying Lancel Lannister; as the most faithful (and charmless) of the faith militant crawls towards the candles burning at the far end of the dungeon, past dozens of casks filled with wildfire, it hits you—Cersei is going to blow the whole place to smithereens. The explosion is colossal, incinerating the High Sparrow, Margaery, Loras and everyone else within a few block radius. Tommen watches the destruction and death of his beloved wife from his bedroom window (the Mountain wouldn’t let him leave his room), his utter helplessness final proof that he's just a boy in a queen's world. He takes off his crown, steps out of frame, and then returns, in a flash, to leap to his death from the window. And thus "The Winds of Winter" has begun, a wild, 75-minute display of catharsis through violence, pitting the faithful against the rational and soaking it all in vengeance. 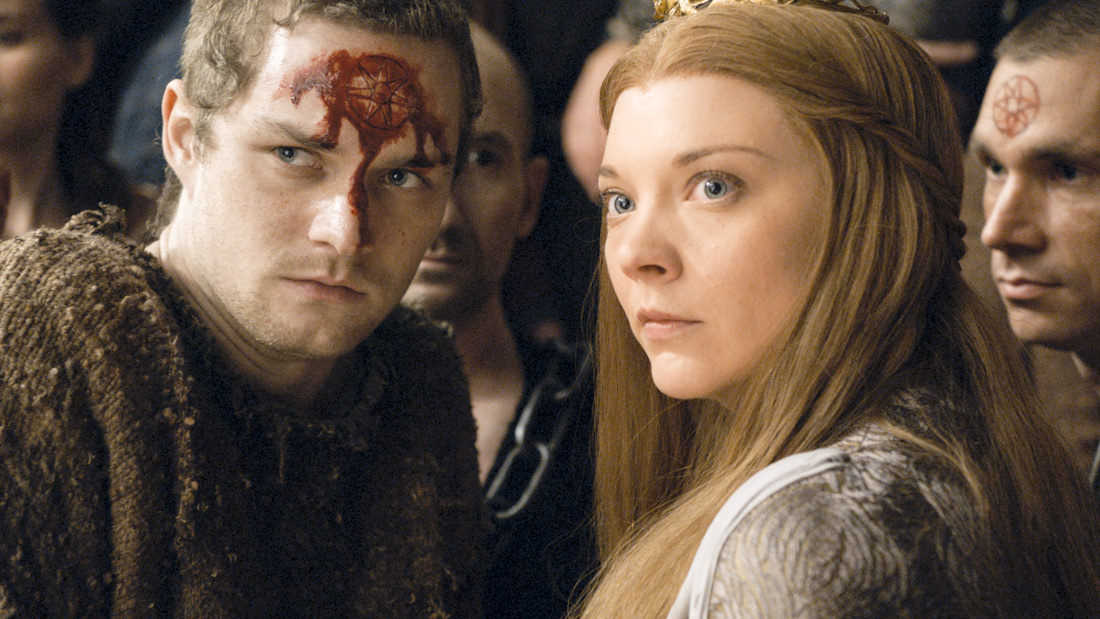 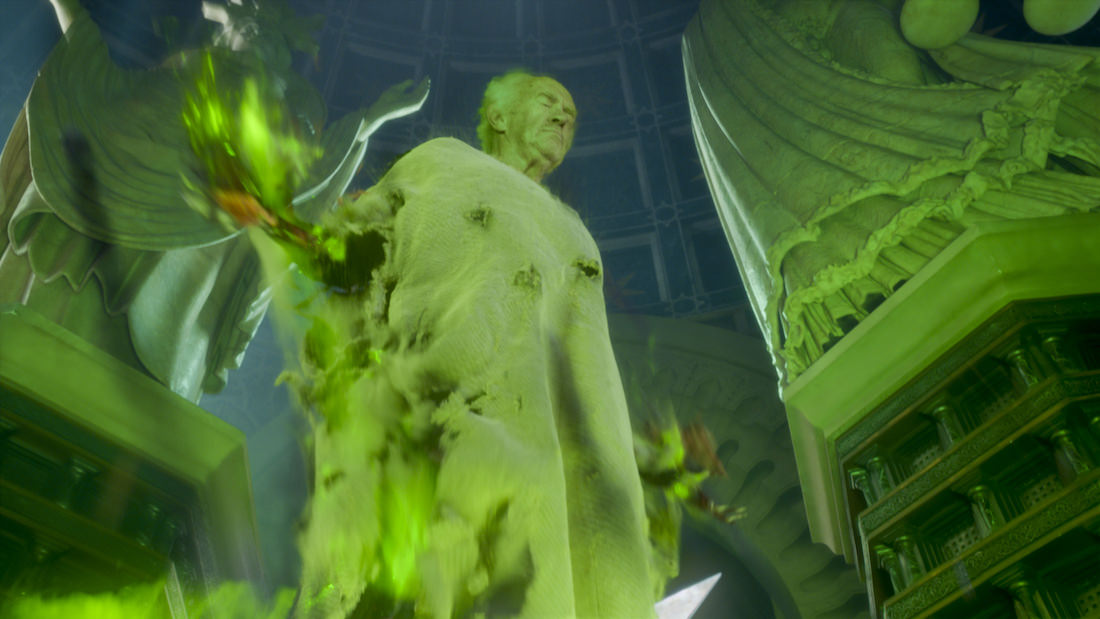 Cersei has just displayed, for once and for all, just how far she’s willing to go to get what she wants. She's always been bad, but this is an order of magnitude higher, or lower, really, than anything she's done before. It’s the most shocking open to a Got episode, ever. The sequence began with Qyburn’s little birds knifing Maester Pycelle to death (one recalls fondly how Varys used to ask his little birds to trade in whispers, not murder), and ended with Cersei closing a dungeon door on her former tormentor Septa Unella, where she was strapped to a plank and about to be tortured, one imagines slowly, by the Mountain. All this happened in a matter of minutes, the crazy violent opening to a super-sized finale that delivered comeuppance by the boatload, finally placing characters with long standing blood feuds in the same room together. 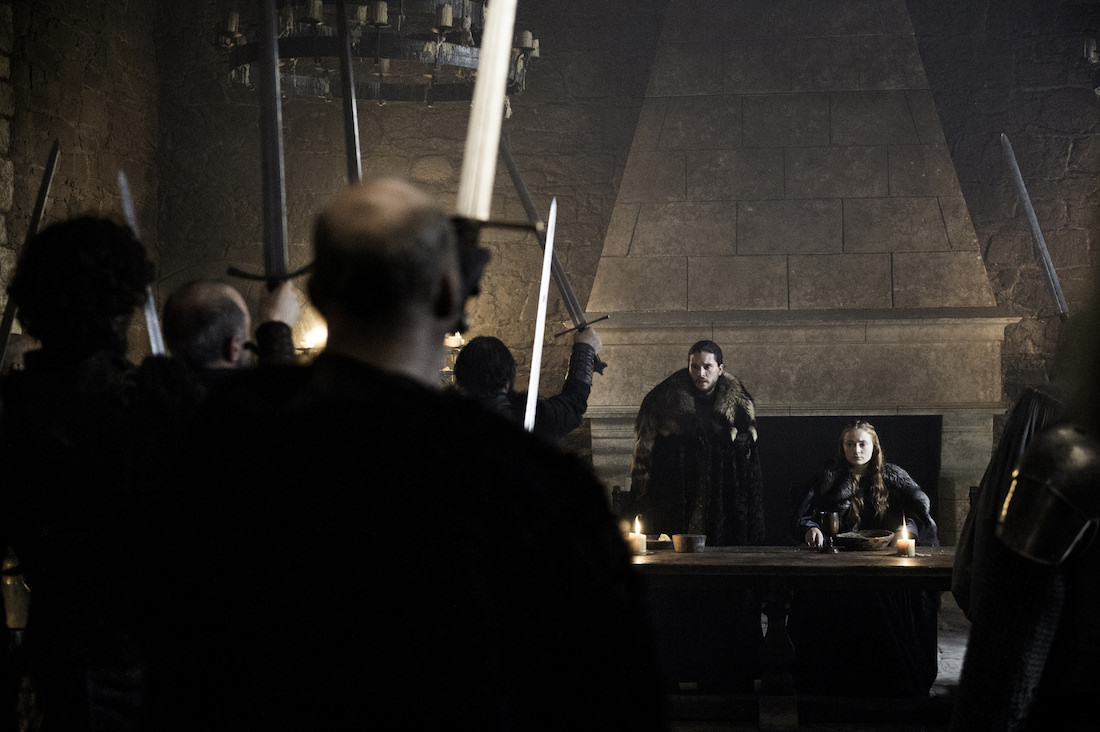 We were finally given the complete Tower of Joy flashback, and it served to uphold a long held fan theory about Jon's true lineage; he is indeed the son of Lyanna Stark and, likely, Rhaegar Targaryen. While this surprised no one, it does set up some potentially tasty drama next season; if Jon's true parentage is revealed (everyone thinks he's Ned Stark's bastard, not the child of a different Stark and a Targaryen), his claims on the north could be challenged. What's more, his link to Dany, who will make her big King's Landing appearance next season, could complicate matters further.

While Jon is in the process of becoming the true king of the north, it’s Littlefinger proving to Sansa once again that there’s no one slimier or more ambitious than he is. He suggests it should be she, not Jon, who is the true leader of the north. Littlefinger has always assumed everyone is as power hungry as he is, but while he might be a master manipulator he seems to truly misread Sansa time and again. He brings this up in the midst of a creepy admission of love. One hopes she's sickened. Yet there was a look between the two later on we'll need to parse. First…

Cersei wasn’t the only character settling some debts. We finally have some payback for the Red Wedding, and it came at the hands of the person we wanted to extract that payback most; Arya Stark. Watching Arya reveal herself to a confused Walder Frey by pulling off her mask and slitting his throat was, while gravely satisfying, not as shocking as the fact she also managed to feed him his sons in the process. As has been noted all over the internet this morning, Arya has become the Sweeney Todd of GoT, serving her enemies to her enemy in a pie. One senses a reckoning coming between Arya and Cersei; did you notice how they both say more or less the same thing to their captive audiences, wanting their faces to be the last thing their victims see? 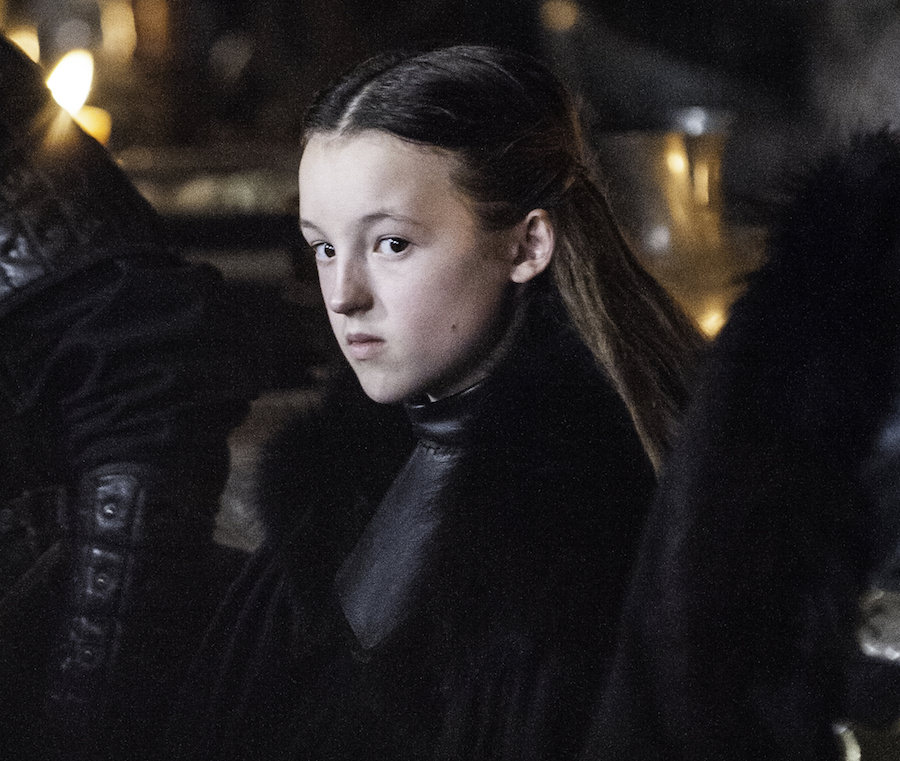 On the plus side of the ledger for faith, there was the little Lady of Bear Mountain who shows plenty, once again, for Jon Snow. It’s the 10-year old Lady Mormont who steps up and forcefully gets Jon’s back, browbeating the various houses in the North who didn’t stand with him in his fight against Ramsay Bolton. Soon enough, the leaders of all the major houses were declaring Jon Snow, the bastard of Winterfell, the true king in the north. Lady Mormont has earned herself the distinction of being Jon’s most trusted ally among the various northern houses. This is the moment Sansa and Littlefinger exchange a look as Jon rises reluctantly from his chair and accepts the houses loyalty—we'll need to keep an eye on them in season 7.

The Lord of Light 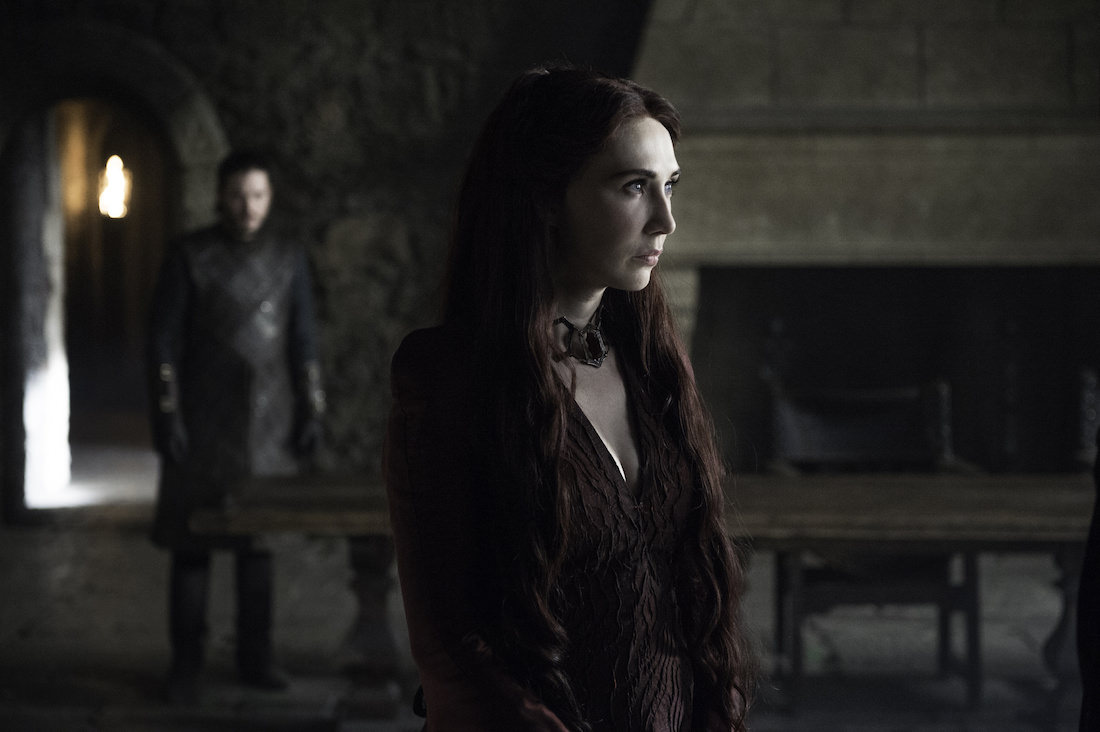 And now for a major strike against faith, there was this; Davos confronts Melisandre about burning Shireen at the stake. She says the Lord of Light made her do it, forcing Davos to state the obvious; if your Lord wants you to burn a child alive, your Lord is evil. It was a heady moment in an episode that looked at faith and pitted it against reason time and time again. She argues that it was this very lord who brought Jon Snow back from the dead. Davos wants her executed; Jon lets her live, but kicks her out of Winterfell for good, telling her to ride south.

Speaking of the south; we’re back in Dorne, where Olenna does her usual bit of universal insulting (her one-by-one take down of all three Sand Snakes was hysterical), until Varys appears and Olenna realizes an alliance with Dorne might be the best way to extract revenge against Cersei.

The Hand of the Queen 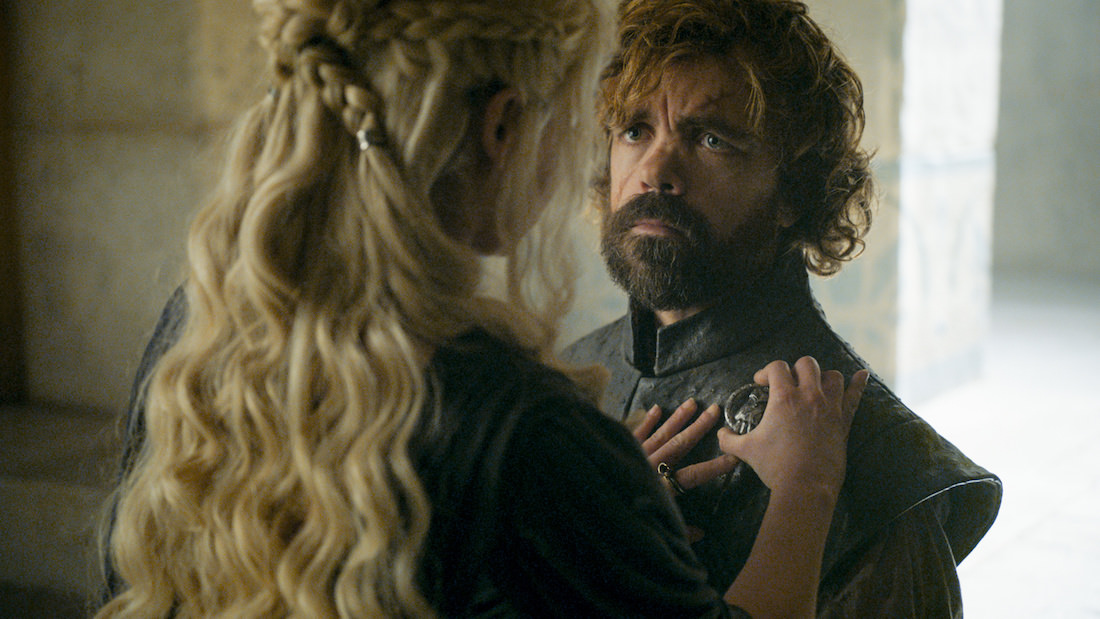 While faith took a beating this episode, it did have another moment to suggest its uses in Mereen. It was here that the only scene that could qualify as tender took place, between Tyrion and Daenerys. After she breaks the news to Daario that he can’t join her in King’s Landing (she needs a king, he could only be her mistress—it won’t work), she joins Tyrion for a heart-to-heart. It was Tyrion who instructed her to break it off with Daario, and despite his whiff with the masters two episodes ago, she trusts his counsel. Their respect for one another is palpable, and it’s made explicit in a beautiful moment when he tells her that, although he’s been a cynic his whole life, and has been asked time and time again to believe in things that failed him—family, gods, kings, himself—he stood before her to tell her he believes in her. Does Tyrion love her? It’s likely. The scene crackles. She makes him her Hand, their alliance complete.

Season 6 has been sensational, and “The Winds of Winter” capped it off with a riotous conclusion. Cersei sits on the Iron Throne, Jon is the King of the North, and Dany, her dragons and her huge army (including Theon and Yara Greyjoy) sail for King’s Landing with Tyrion and Varys by her side. We wonder whether Littlefinger will worm his way into Sansa’s mind and create a division between her and Jon. And then there's the question we posed, and tabled, at the start of this piece; has Cersei lost Jamie with her latest, and largest, act of mass murder? When Jamie learns his sister torched the city to achieve the throne, the very thing the Mad King was planning to do before Jaime killed him, will his undying loyalty to his lover/sister finally buckle?

Season five ended on Jon Snow's pale face, staring straight at us while he died in the snow at Castle Black. Season six ended on Daenerys Targaryen staring out from the prow of the lead ship in her massive fleet, looking towards a future she means to shape. But it’s a future that includes an enemy she hasn’t even considered yet; the true enemy, the one led by the Night’s King. While she has proven a capable, even fearless leader, will she be a just one? Will she be able to put aside her desire for the Iron Throne when it becomes clear who her army will really have to fight?