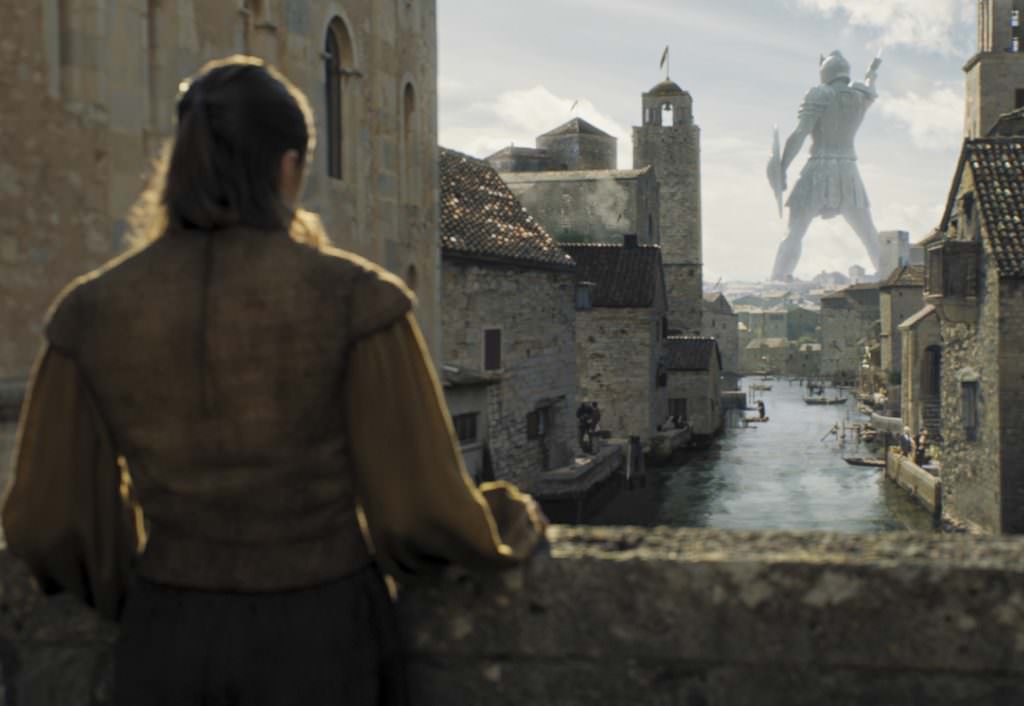 Game of Thrones: The Broken Man

And once again, they are fated to rise and fall together. We’re talking, of course, about Arya and the Hound, who last parted when Arya refused to put the old dog out of his misery after his bruising, brutal, and losing fight against Brienne in season four. In a Game of Thrones rarity, we meet the Hound, also known as Sandor Clegane, in a cold open—and he's very much alive. He’s now in a group, chopping wood and being helpful (but, of course, gloomy) for Septon Ray (played by the always welcome Ian McShane). And as the episode ends, we leave Arya as she left the hound; bleeding badly and in need of mercy no one in Braavos seems willing to give. Will she die? It’s unlikely, but no one in the GoT world is above being killed off—save for Jon Snow, of course.

If last week’s episode was surprisingly soaked in light (people doing the right thing, people standing by their man), “The Broken Man” swept us back towards the darker side of human behavior. The Waif happily runs a sword through poor Arya, igniting a rumor that Arya will turn out to be the Lady Stoneheart from the books. In George R. R. Martin’s telling, Lady Stoneheart is a zombiefied Catelyn Stark who goes around murdering everyone who ever harmed her family. The theory is that in the show, she’ll be a resurrected Arya, doing much the same. It’s not a bad theory, and is somewhat supported by the re-appearance of the Brotherhood Without Banners. If you remember, it was Brotherhood leader Beric Dondarrion who was brought back from the dead after the Hound chopped him to pieces. The fact that we meet them again in an episode that also features the return of the Hound and the possible death of Arya seems to hint that, although mortally wounded, Arya’s not gonna die on us. Or, that actress Maisie Williams is still going to be in GoT, but perhaps playing an undead and very pissed off version of her character.

Back to the Hound. His new buddy Septon is all about peace and love (or simply not about killing), an outlook the Hound doesn’t share. He tells the Hound that his life was spared by the gods. The Hound’s not really buying this, either. When a few members of the aforementioned Brotherhood arrive, Septon assures the Hound that killing them won’t solve anything. By the end of the episode, Septon’s dead (hanged), as are the entire group he lead. Men, women and children lie in heaps. The Hound grabs his ax, becoming possibly the first GoT character to star in an episode’s cold open and it’s last shot.

Speaking of people believing in the righteousness of the gods, we know of one young lady who’s doing a bang up of job of pretending she buys it—we’re talking about the increasingly clever Margaery, who’s playing the loyal student to the High Sparrow. The High Sparrow makes it clear to Margaery that he plans on doing something untoward to her beloved Olenna, yet another sinner he sees fit to punish (but of course he’d claim it was the gods punishing her). Margaery lets her beloved grandmother know that the wise decision would be for her to beat feet out of King's Landing, fast. She then slips her a sketch of a rose, the sigil of House Tyrell. While Cersei makes her moves to vanquish the High Sparrow in broad, bold strokes, it’s looking likely that Margaery’s the one who may figure out how to beat him as she quietly seduces him, so to speak, into thinking she buys his beliefs. Frankly, it always seemed a little too pat that such a clever, willful woman like Margaery would fall so hard, and so fast, for the High Sparrow’s b.s., so this turn of events feels right.

Meanwhile, season 6’s leading candidate for MVP, Ser Davos, once again proves his mettle with his sober, humble analytical skills. The guy seems to read people better than anybody else on the show. He sizes up the diminutive but not to be trifled with queen of Bear Island a wins Jon, Sansa and himself…62 soldiers. The recruitment process for Team Sansa isn’t going as well as Sansa had hoped. In fact, Lord Glover tells her that “House Stark is dead,” a particularly brutal assessment for her to hear. Sansa has had it probably worse than anybody else on this show. She not only watched her father die, she watched her first husband order it. Oh, then her second husband was/is a psychopath rapist. To learn that her family’s name no longer carries the weight it once did after enduring marriages to the two most evil people on a show filled with evil people was a bitter pill to swallow. It looks like Sansa’s going to have to rely on a man she threatened to have killed, the man she’s probably writing that letter to—Littlefinger.

The Lannisters aren’t faring much better than Sansa. Jaime can’t get the Blackfish to give up Riverrun, and Cersie can’t convince Olenna to stay in King’s Landing and help fight the High Sparrow. In fact, Olenna’s not completely uninterested in helping Cersei, she positively detests her. “I wonder if you’re the worst person I’ve ever met. At a certain age, it’s hard to recall.” I mean ouch. Also, we’ve got a reunion/showdown in the works between Jamie and Brienne.

Speaking of strong women, all hail Yara Greyjoy. Now that’s how you give a speech. Her pep talk to Theon was moving, and if these two manage to get to Daenerys, they’re going to form a very formidable alliance.  There’s only three hours left in this season and a whole lot of narrative momentum bringing major players into contact. While we’re rooting for Team Sansa, with GoT you can’t count on the good guys winning. Ever.