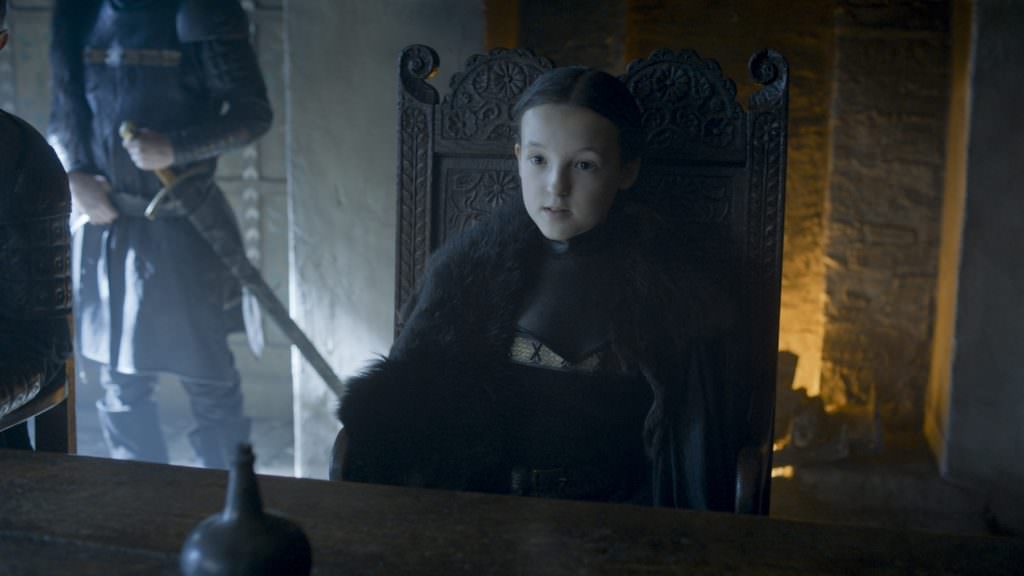 You've got to hand it to Game of Thrones. In "The Broken Man," an episode that involved a 20-foot tall giant's one word affirmative response to Jon Snow's call for help, it was the four-and-a-half foot tall, 10 year old Lyanna Mormont (Bella Ramsey) and her affirmative response that stole the show.

But first, let's revisit Jon, Sansa and Davos meeting with the wildlings. Despite Tormund Giantsbane's solidarity with Jon, the wildlings were not inititally keen on going to war with the Bolton's, when what they'd agreed upon was help Jon fight the White Walkers. For a proud, free people, being asked to join up to what are essentially foreign wars is a tough sell. This was when the giant Wun Weg Wun staked his position in what we assumed would be the best moment in Team Sansa's recruitment operation:

But of course that was before we met Lyanna Mormont.

In a single scene (which you can catch a glimpse of at the 2:26 mark in the video below), Bella Ramsey's turn as Bear Island's ferocious (but weirdly mature) child leader Lyanna Mormont gave GoT fans the thrill of instantly loving a new character. There's been a few such immediate responses (think Oberyn Martell or Brienne or Bronn or, of course, Tyrion from season one) in the show's history, but it would be hard to argue any have been as unexpected as this. The little lady of House Mormont was curt, cool, and initially unmoved by Jon and Sansa's request for additional men. It took the always perceptive Davos to figure out how to crack the child's iron shell. In the process, GoT put another fan favorite on the board, and, as Vulture wrote, generated some very funny responses in the process.

What the below "Inside the Episode" recap also reminds us is that this isn't the first time we've heard of Bear Island's diminutive ruler. Stannis Baretheon brings her up in season five, hilariously so, in retrospect. "Do you know this wretched girl?" he asks Jon while recouping at Castle Black, shoving a letter towards him. "The Lady of Bear Island…and a child of ten." Stannis was livid because Lyanna had denied his request for aid, writing that the only true King of the North she knows is named Stark.

Now that Arya's potentially dead (or, at a minimum, no longer a little girl), GoT has it's newest prematurely matured (a weird combination of words that still makes sense here) child badass. 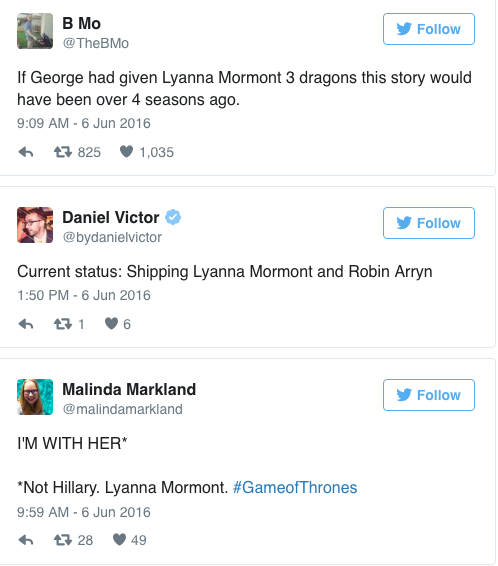 Lyanna might be new-ish to the show, but she's well known to readers of George R. R. Martin's books. In fact, the Mormont women are beloved characters in those pages, and Lyanna is hardly the only spitfire among them. For a deeper dive into how Lyanna Mormont factors into the books, as well as her intriguing family (including Dacey, a woman warrior as tough as Brienne), we suggest you click here.