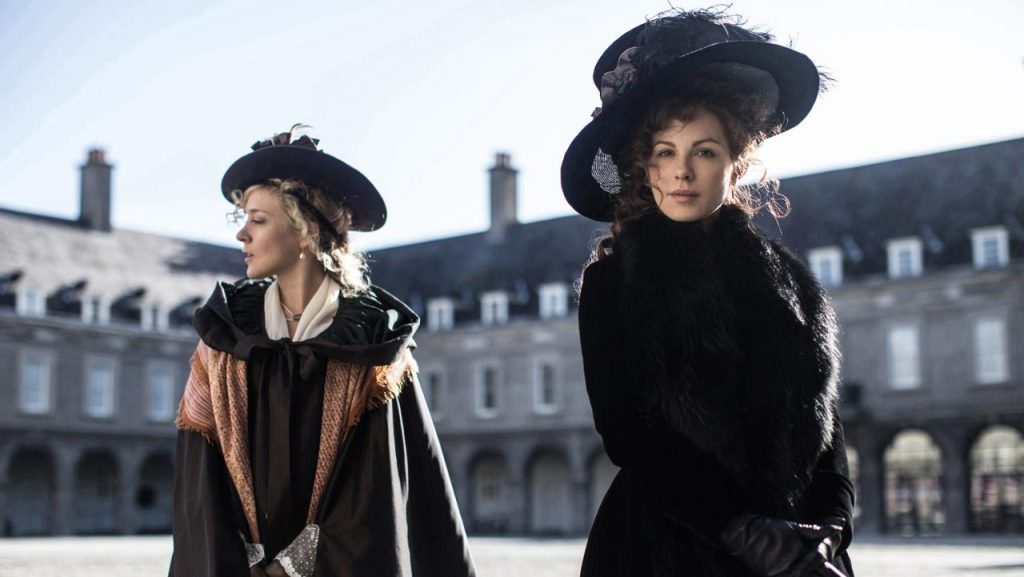 Most of the characters in Metropolitan, writer-director Whit Stillman's 1990 debut, are wealthy young Manhattan sophisticates with an enthusiasm for the artifacts of a refined past — notably, the novels of Jane Austen. Stillman's movie just happened to be followed by a rush of Austen adaptations.

Now the filmmaker has made his own Austen movie, Love & Friendship, which opens in limited release today, May 13. It's based on Lady Susan, an early novella that Austen never published. The movie is a wicked, and wickedly funny, tale of a conniving widow, Lady Susan Vernon, who enchants several potential suitors. Vernon is played by Kate Beckinsale, while Chloe Sevigny has the role of Alicia Johnson, Vernon's confidante. The two actresses previously worked together in Stillman's 1998 film, The Last Days of Disco.

While in D.C. in April for a screening of his new movie at the Washington International Film Festival, Stillman sat down with The Credits for this chat, which has been edited for length and clarity. It was my third interview with the director, and I began by reminding him of the first one. When we talked at the time of The Last Days of Disco, I asked if he deserved credit for the '90s boom in Jane Austen moves. What he replied then, I reminded him, was "Absolutely!"

Now you finally have your Jane Austen movie. How long have you been thinking about this?

Since at least 2004. I think it was earlier, though. That wasn't years of suffering. I knew it would take a really long time to do the adaptation. So it was my fun project that I would work on between paying jobs.

When you were thinking about doing a Jane Austen project, was it always this one?

No, no. This is sort of an afterthought, actually. And it's sort of been published as an afterthought. Very often, Lady Susan is published behind another novel. I discovered it in an edition of Northanger Abbey. Like a DVD add-on.

That became kind of attractive, because no one else had adapted it. And it hadn't been entirely finished by her. So it was a chance to take really good comic material that she had buried within it and making it a completed film story.

Lady Susan is an epistolary novel. Did you take the voices of the characters from the letters?

Exactly. I would take two to five letters to create the dialogue in a scene. Structurally, I had to change things, so I added a character, Mrs. Cross. Some things Lady Susan couldn't say directly to Alicia Johnson. There had to be some other character with her. So Mrs. Cross was there for that. And then became her own character.

It's good having these structural needs to change things. That leads to other material, other avenues of story. In this kind of comedy, there's a lot of emphasis on the dialogue. But it really also has to be about story. That's what people are interested in.

You have a number of scenes in which people read letters, sometimes out loud.

I was very conscious that I didn't want to do that very much. I didn't want it to be about just the structure of the original material. I think there are, like, two scenes where the letters are important. But there's also the physicality of the letter. There's the letter arriving, one person carrying it to another person, part of it being read.

The first three films you made were set just a little bit in the past….

Yeah. It's easier doing very far in the past. Because there are tremendously talented professionals and companies set up to meet that need. Ireland is kind of the European backlot for period films. It's much more like south England in the 18th century than south England is now. Because that area has become hugely wealthy and developed.

In London, there are two costume companies that are full of beautiful costumes from the period. You'd go in, and there'd be Downton Abbey, Poldark — every show you've seen. In Dublin, there's a big carriage company, and there are all these guys working with the horses and carriages. When you hire the carriages, they come with the guys. We put them in wigs and they looked like 18th century coachmen. There's an apparatus for supporting distant period films that doesn't exist, really, for 1981. So doing The Last Days of Disco is more difficult. Also, no one is alive today who remembers it. So you have a little more freedom. 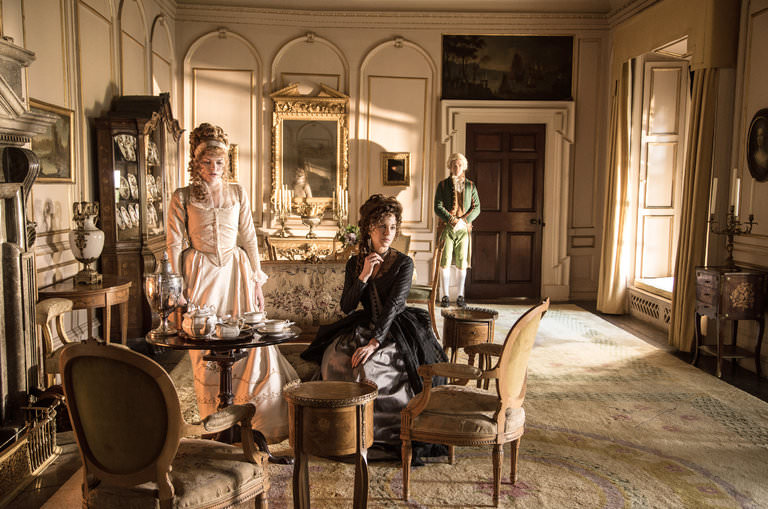 When we talked about Damsels in Distress, you said that the character were trying to create "a kind of '50s Grace Kelly/Audrey Hepburn utopia."

Is this a Georgian period utopia?

Yes. Any film I make is going to have its utopian element. I'm a pleasure seeker, and I want people to have 90 minutes of pleasure, not pain. To have a positive, interesting world, cheerful in some way — I like that.

Is your idea of utopia in the past?

I think it's easier to figure out things you like in the past than to figure out what you might like in the future. We know about the past, and we know things that we like and dislike. My utopia would not be 1941 Poland. But 1790s England was pretty good. The Jane Austen world.

And this is the early Jane Austen world. Everyone says, "Regency Regency Regency" for Jane Austen. This is before the Regency. And so we could put the girls in sexy dresses, rather than those horrible maternity dresses they wore later.

And the outlook of the novels changes?

Yeah. The sensibility in this novella is very different from the others. There is comedy in all Jane Austen, but this is more pure comedy, more Oscar Wildean. It's less moralistic. Less morally educative.

I was going to mention Wilde. Did you see his plays as a model to the dialogue?

Yeah. I do like to be practical when I'm beginning a film project. Like, how could this be? What would this be like? So what I thought of, was Oscar Wilde adaptations on film. I thought this would be more like those than a Jane Austen adaptation. In making it, it turned out to be different from those films. It's its own thing.

In what way did it turn out to be different?

Those films still do have the play structure. Because I was doing this directly as a screenplay, it's more of a film environment. There's a lot of geography, and a lot of movement between the geography.

The speediness of the dialogue reminded me of Wilde.

Yeah. That's something that just took a very long time. That's why I wanted to allow tons of time for working on the adaptation. Just paring it down, paring it down. Because there's so much good material. Then on the set, we'd pare it down further.

This is the second time you've worked with Kate Beckinsale.

And Chloe. My third time with Chloe, actually.

You seem to have a certain kind of character that you associate with Beckinsale.

Yeah. She's very close to Charlotte in Last Days of Disco. Really, she came with that. Because she had done Emma as a miniseries in England, and she had done Cold Comfort Farm. So there's kind of a through-line for the four characters. It's totally in her comfort zone. And she's so great at it.

People who weren't that aware of her earlier career are surprised by this, because it's not Underworld. But this is her other specialty. Besides looking sexy in latex. I haven't actually seen Underworld. But the posters look super sexy.

Did you intentionally set the music at the same pitch as the dialogue?

Yes. The music is mostly from an earlier period. I love baroque music, and the editor did, too. So it's mostly baroque music, and it's incredible how well Vivaldi works in movies, emotionally. But we varied that with a lot of less well known composers.

We were editing in Paris — it's a French-Irish co-production — and we had an editing room facing the beautiful Paris Opera-Comique. The street names in the neighborhood were the names of all these great composers that were listening to, and putting their music in the movie, and that they're talking about in the dialogue.

So there's a Rue Cherubini, and Kate Beckinsale talks about "the music of today, Cherubini." Which took us a while to figure out how to pronounce. I had her mispronounce it in the film, so I had to have her loop it.

In the film, there's a recurring discussion of whether "honor thy mother and father" is the fourth or fifth commandment. That's not from the book.

None of the religion is in the book. But there's so much cruelty from Lady Susan and Alicia Johnson to everyone — "may his next gout attack end more favorably," all that kind of stuff — that it was good to have something sort of virtuous.

Also, I'm always looking for things that people everywhere will get. So, in Last Days of Disco, they talk about Disney films. That's one of things that you can refer to, and a lot of people get the reference. People all over the world have seen Lady and the Tramp and Bambi. And a lot of people know about King Solomon and the baby, which they discuss in Love & Friendship. If you're going to have that kind of dialogue, you need things people know about.

The ending — your ending — has a bit more punch than the novella's. Do you think Jane Austen would have approved of your version?

I can't say. Probably not at the time. But if she were dragged into the present, she might think it's OK.

One of the reasons maybe she didn't publish Lady Susan, or work more fully on it, is that she became more serious and devout as her life went on. So I think that she wrote Mansfield Park because she felt that Pride and Prejudice was too light and airy. And she wanted to do something more moral. And that was Mansfield Park, which I adore. With that trajectory, she probably wouldn't like my ending.

But what does the adaptor owe to the original? Nothing. According to the USC film program, quoted by some other director. Since I didn't go to film school, I have to just quote other filmmakers, quoting their teachers.