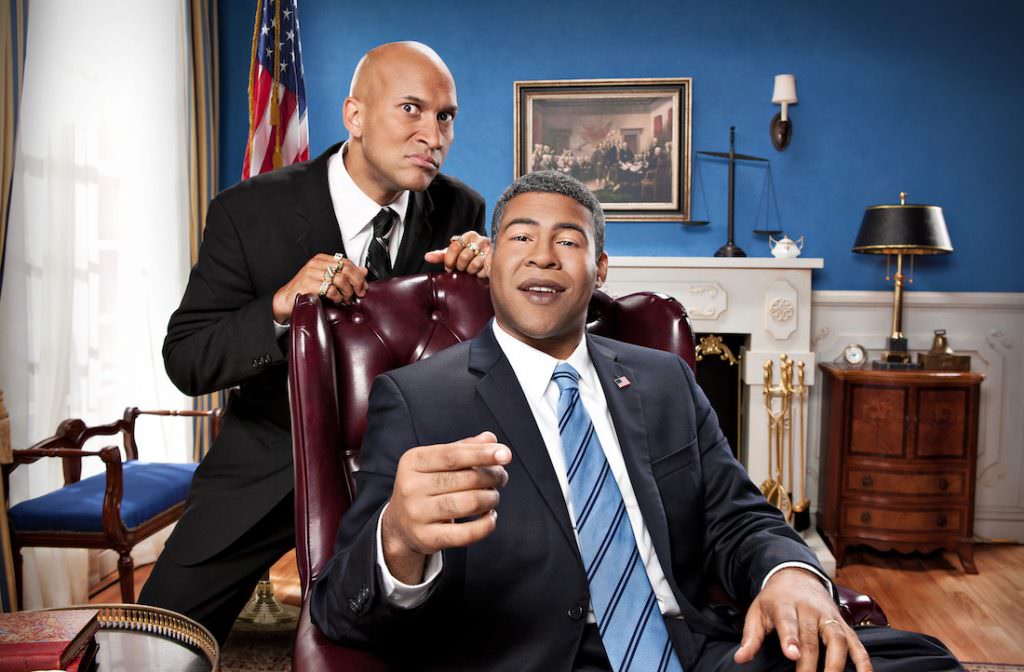 Gary Kordan was the production designer for the entire Key & Peele comedy series, the legendary sketch comedy show that was not just brilliantly performed, but ambitiously produced, from the costumes and sets to the direction. Kordan also helped build multiple eras for Time Traveling Bong, a three-part miniseries starring Ilana Glazer and Paul Downs from Broad City. Kordan created sets for a dozen different times in history, all the way back to Plymouth in 1680s (a time unsurprisingly brutal for poor Ilana and women in general) to the future in 2042.

We spoke to Kordan about how the look of the sets for Key & Peele was different from other sketch comedy shows, and why it helps to have a slight hoarding problem if you are working in production design.

What was the idea behind Key & Peele​'s super detailed production design?

My same art department was with Key & Peele from the pilot on.The inspiration we got from the director and from Jordan and Keegan had us deciding very early that we were going to treat it like a feature film every single day, and not just any feature film, but like an Oscar winning historically accurate feature. 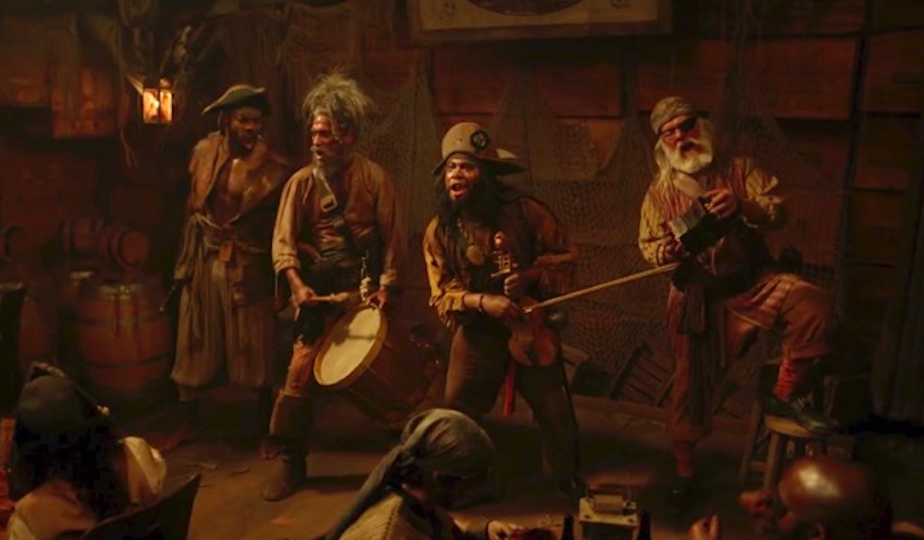 This is really unusual for a sketch show. What was the feedback?

We would just sort of put our crazy person hats on every day when we were dressing and shopping and designing and putting these sets together. And the feedback that we got in the first season from the details that we would put on the sets, not only from fans of the show but from the crew and from Jordan and Keegan, the way they noticed things that people had never seen in a show like this, that gave us the desire to be even more detailed and more layered and put more secrets on set all the time that people would find.

As the show grew in popularity and cultural impact, how'd it impact your work?

How much on location shooting did you do?

We shot ten sketches a week; two a day in different locations. We would scout quickly to find locations based on the sketches and then the art department would be given the task of figuring out how we can do four sketches in this space so that production doesn't have to move. On one soundstage we built the Obama set, Power Falcons, which is a tribute to a sci-fi, Godzilla-type monster movie, and then we built our 1980’s aerobics workout set, and then we would build an office set. We needed to make all of this look believable, we needed to pull it off in one day, load it in, set it up, shoot it and strike it and move on to Tuesday and have it all be something that was cinematic on camera. But the funny thing is the way we scouted them and shot them was if you moved the camera two inches to the right or left there was no more set. And my set decorator and my prop master and our buyer would just say, ‘How can we make this as detailed and layered possible?’ We actually said to each other, ‘We are going to make this not look like a sketch comedy show and we are going to work really hard to defy what people are expecting from sketch comedy. I believe we did it. 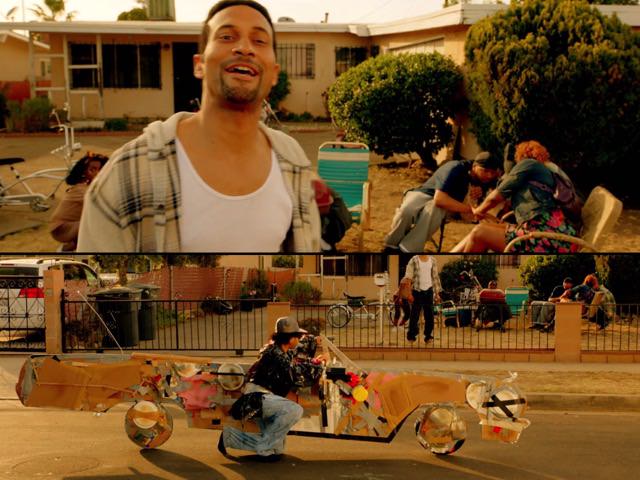 In this sketch, Jordan's character drives what at first blush appears to be an actual car. Of course it's not. Courtesy Comedy Central. ​

How do you find all of your materials?

Everybody that works in the art department has a real hoarding problem. We look everywhere. It is a mixture of rentals, our vendors building custom pieces for us, Goodwill, flea markets, going to the crew’s garages. When we really needed lots of layers of stuff we would post notices in the office and say: ‘Attention crew, we are coming to your garages, we are coming to your basement, we are taking your stuff that you don’t want. And we would send the truck over and fill it up with vintage stuff or recyclable stuff. If we had to do a scene that involved tons of beer cans we would say, ‘Save your party stuff.’

You've been designing sets for comedy for a long time now. What's your secret to designing in a way that looks like it's for drama?

What gets the writers and get the people on set excited is it looking real, not looking fake or sketch comedy looking. They love details and details come from asking: who is the character? What kind of things would they have on their shelf? What would they have on their desks? What would they write on their Post-its? What browser would be open on their laptop? In an office scene, we will fill the desk drawers with character-based elements so that when the actor sits down on set and he opens the drawer and there are things in there that the character would have, that helps them do a better job and then everyone has a good laugh. And you never see it on television but it just enhances the whole aspect of how the sketch plays. 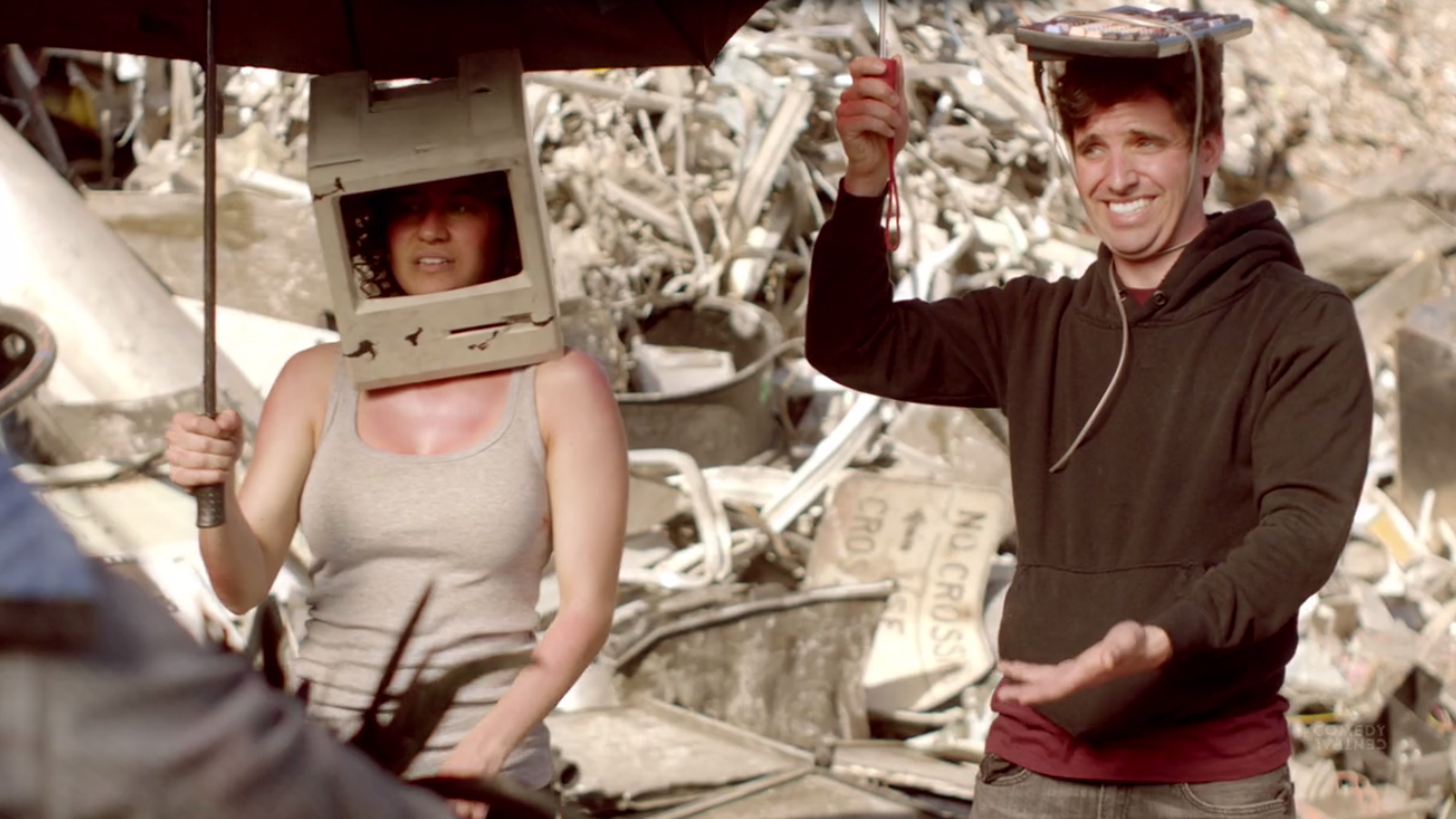 "Time Traveling Bong" has further given Kordan a license to obsess over detail. Courtesy Comedy Central​

Do you have any rules for what makes a great set?

The three keys to a good set are color choice, layering, and age. Those are the three things on all the sets that I do, but particularly for Key and Peele the rule was that nothing can look new, and everything has to be layered with mess, even if it was on the ‘Les Mis’ sketch. In the background there were layers of period-appropriate set dressing that would then be sprayed down with a layer of dirt and grime. For the 80’s aerobics sketch, all of the color choices and the neon and the laminate on the floor and the set design was based on those dreary, weird 80’s colors. I’ve had the same scenic painter for 12 years who understands what I am looking for and what I need on every set. He will come in and dust age everything; doorknobs, a stapler, a computer, fingerprints on the laptop screen. Those are the kind of details you see in feature films that add that textural, grainy, believable look. ery often on comedies, everything looks like it comes right out of a catalog; it’s a brand-new couch, it’s a new phone, it’s a brand-new microwave. And we don’t live like that.  I sort of hate it when the 80’s movie comes out and everyone is in neon with a scrunchy in their big, big hair and 'Let’s get physical' written on their shirts and stuff like that. You could tell that they got that from a 80s movie.  I grew up in the 80s, not everybody dressed like that. Our lives aren’t like that, our lives are messy. We have mail, we have junk mail, we have Post-its, we have crumbs on the counter, and we have and fingerprints on the refrigerator.  That’s where I get my most excitement, that layer of what is lifelike.