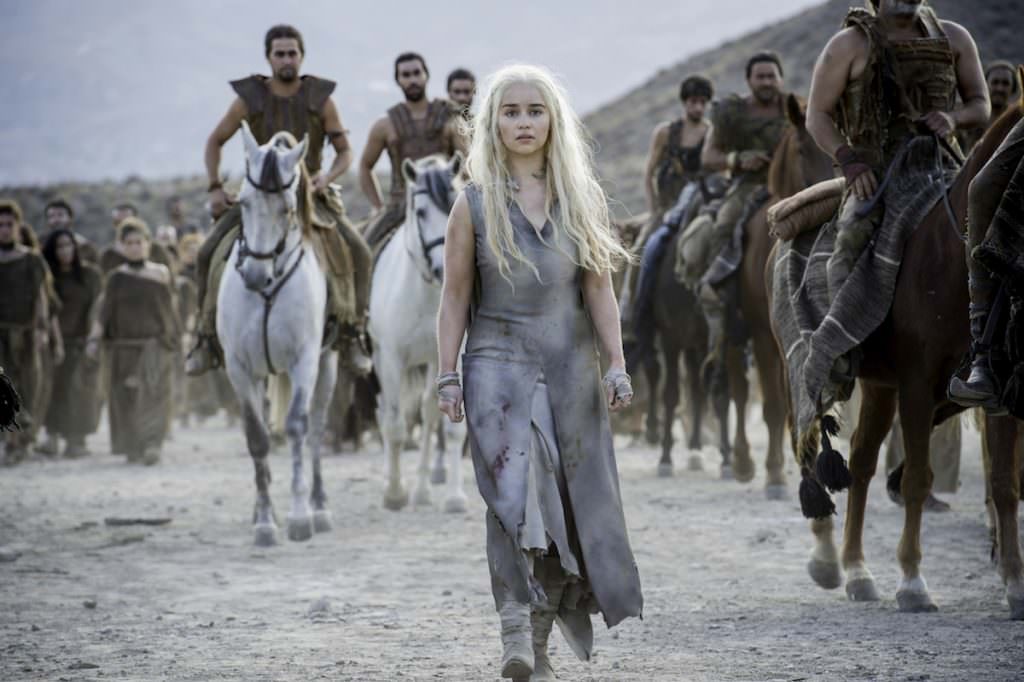 A few major Jon Snow-related questions were answered in "Oathbreaker," beginning with what the resurrected Lord Commander would be like; more or less the same. Although he's only been back among the living for a short time, Jon Snow seems to be himself (with a few nasty stab wounds). He was emotional and understandably confused. He was appreciative of his friends, like Davos and Toromund (who managed to get a joke in about Jon's penis size, mere minutes after he'd risen from the dead—Wildling humor knows no bounds, in this life or the next!) and especially Dolorous Edd, more on that in a bit. He was pitiless on his betrayers, including Ollie (if you thought he'd spare the child, you must be new to GoT). And he seems, all things considered, to be a mortal man again. In a dispiriting moment for Melisandre (pun!), Jon told her what he saw when he was on the other side—absolutely nothing. Bummer.

The big moment came at the episode's end, when Jon bestowed his cloak to Dolorous Edd after hanging his killers and gave up his role as the Lord Commander of the Night's Watch. It's a lifetime oath, and one Jon has technically already served. "My oath has ended," Jon said as he made for the gate. At this point, the rest of the Night's Watch can be excused for standing there, speechless; it's been a weird few days at Castle Black.

Let's head south to King's Landing, where Cersei's bout with self-recrimination and surrender has also ended. She's back in her most comfortable mode, Ice Queen, and she's ready to use her tireless lever-pulling and her colossal Franken-Mountain to reclaim her power. She, Jamie and the Mountain "attended" a small council meeting, uninvited, fairly terrifying everyone in attendance (save the unshakeable Olenna Tyrell). Cersei's got a lot of machinations in motion. Including this show of power, she also has Qyburn, the Mountain's re-creator, using Vary's former "little birds" to find out who's trying to take advantage of the Lannister's losses.

This is usually where Cersei starts to make passionately based poor decisions (see all the moves she made after Joffrey's assassination and how each and every one blew up in her face, ultimately resulting in the murder of her father and daughter). It seems like she's trying to orchestrate a trial by combat that will unseat the High Sparrow and destroy or scatter his militant true believers. Her rage over Myrcella's death needs to be tempered with chess moves, not checkers. Just look at how poorly her son and the nominal king Tommen's talk with the High Sparrow went, when he went tot he self-righteous chess master himself to demand that his mother be allowed to visit her daughter's grave. The High Sparrow easily turned the fuming royal into a doe-eyed supplicant, treating the boy-king like a grandson he's fond of. It was a moving story he told about the purity of Cersei's love for her son, but it moved Tommen to give up trying to get anything from him.

Hey, it's a Sam and Gilly sighting! They're on a boat in some rough seas, on the way to Sam's home where he hopes Gilly and the baby will be safe with the rest of the Tarly clan. Gilly's now a literate, fierce and loyal woman, and Sam is as sweet and vomitous as always.

North of the Wall, Bran was once again taking a trip into the past, this time to his father's famous swordfight with legendary swordsman Arthur Dayne. This historic scrum took place at the Tower of Joy, where Lyanna Stark (the pretty young lady introduced in Bran's last vision, also his aunt) was being held. Winterfell lore has it that the honorable Ned Stark defeated Dayne in a fair fight. In fact, Bran's vision reveals that Dayne was stabbed in the back by one of Ned's men, and all Ned had to do was deliver the killing blow. Here's where things get even more interesting. As Ned raced into the Tower, Bran called after him, and Ned seemed to hear him. If Bran can make his voice felt in the past, what might else he be capable of doing? Possibly changing the past itself?

If so, perhaps he can go back to when Dany freed the slaves of Meereen and tell her to leave for King's Landing. Meereen is no more interesting than Dorne! Okay, that's not entirely true—Meereen has Tyrion. It also has Varys, back to his whisperin' ways, threatening some information out of a Son's of Harpy supporter. Meanwhile Tyrion's trying to teach the Worm and Missandei the art of conversation, and, in general, they're all stuck living out in real time Tyrion's newly minted aphorism—"the true history of the world is a history of great conversations in elegant rooms." Yes, fine, but here's to hoping Tyrion and Varys take a road trip, soon.

Finally Arya can see again. That was a long, long slog of blindness and beat downs for the fiercest little Stark of them all, but she seems to have finally passed the test after drinking some poisonous water, surviving, and having that magical glaucoma healed up. Only now that she has no name, what happens if she runs into Jon Snow? 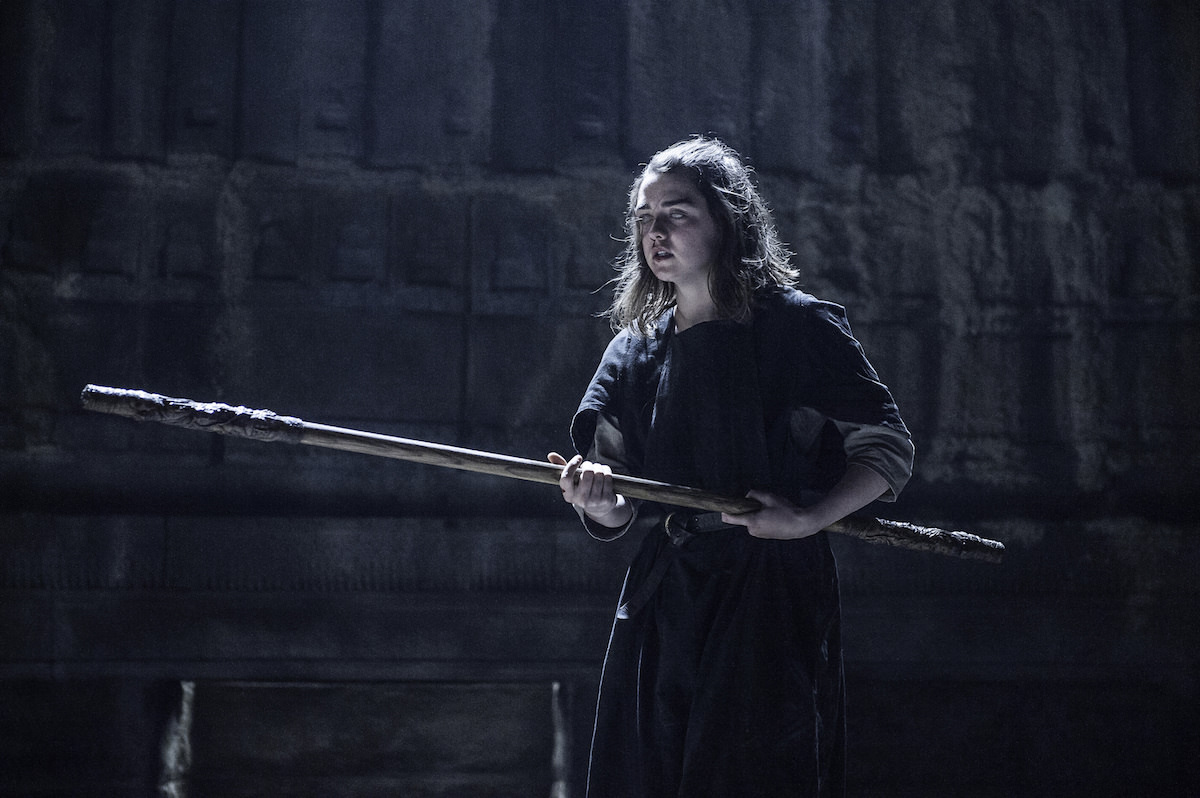 In unwelcome news. Ramsay Bolton now has Bran's little brother, Rickon, as a prisoner. We were spared any torture or Ramsay's bloodlust this episode, but unless Ramsay's had a change of heart and intends to listen to his father—whom he just killed—and stop acting like a "mad dog," poor Rickon is in major trouble. Just one look at the severed head of Rickon's direwolf has me rolling my eyes in pre-disgust for whatever Ramsay's going to do to him. Boooooo.

Dany met with the other Khal widows and was, unsurprisingly, put her in place. They stripped her, they mocked her hair color (what's with everyone in the horse lord community mocking her hair color?), and told her she wasn't even assured of a spot at the temple.

Let's end where we began, where this season began—Jon Snow. If there's one thing that has changed about him since his trip to the void, it's that he could now conceivably go anywhere or do anything, so unmoored does he seem by being alive. While I worry his leaving Castle Black will coincide with Ramsay's attack, I can't imagine Jon's experiences pre-death won't make him the ideal person to take on the White Walkers. No one's had more experience fighting them. Yet no longer beholden to Castle Black, the Jon Snow narrative has just got a whole lot less predictable, which is a good thing.