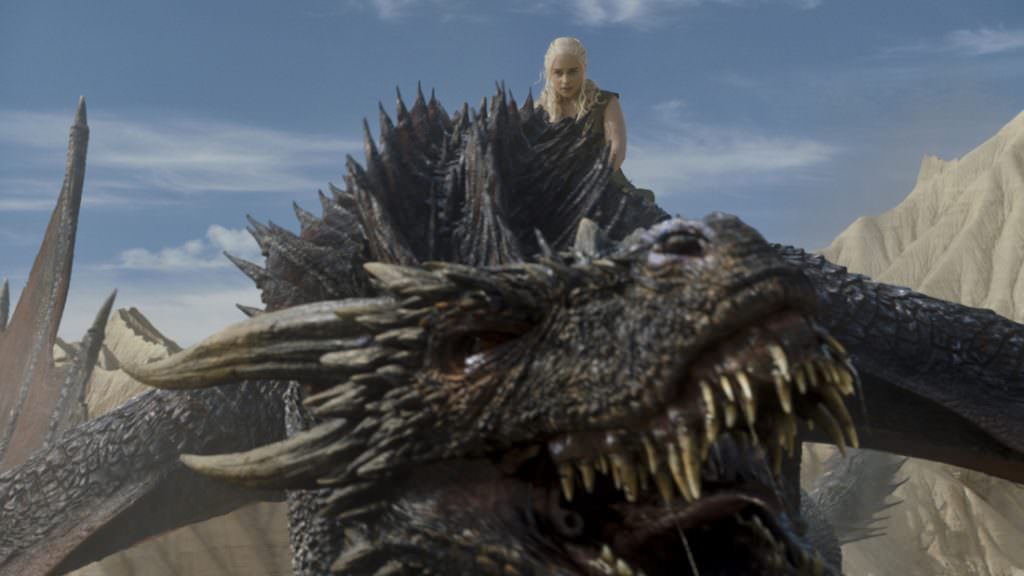 Game of Thrones Recap: “Blood of my Blood”

Is there a show in television history with worse fathers than Game of Thrones? In this week’s episode, directed once again by Jack Bender (the man behind last week’s sensational “The Door”) we meet Randyll Tarly, Sam’s father. The man is, to put it mildly, an awful person to break bread with. He doesn't speak for the first few minutes, and you just know when he finally does it won't be, "Sam, my love, you look fantastic, how are you?" 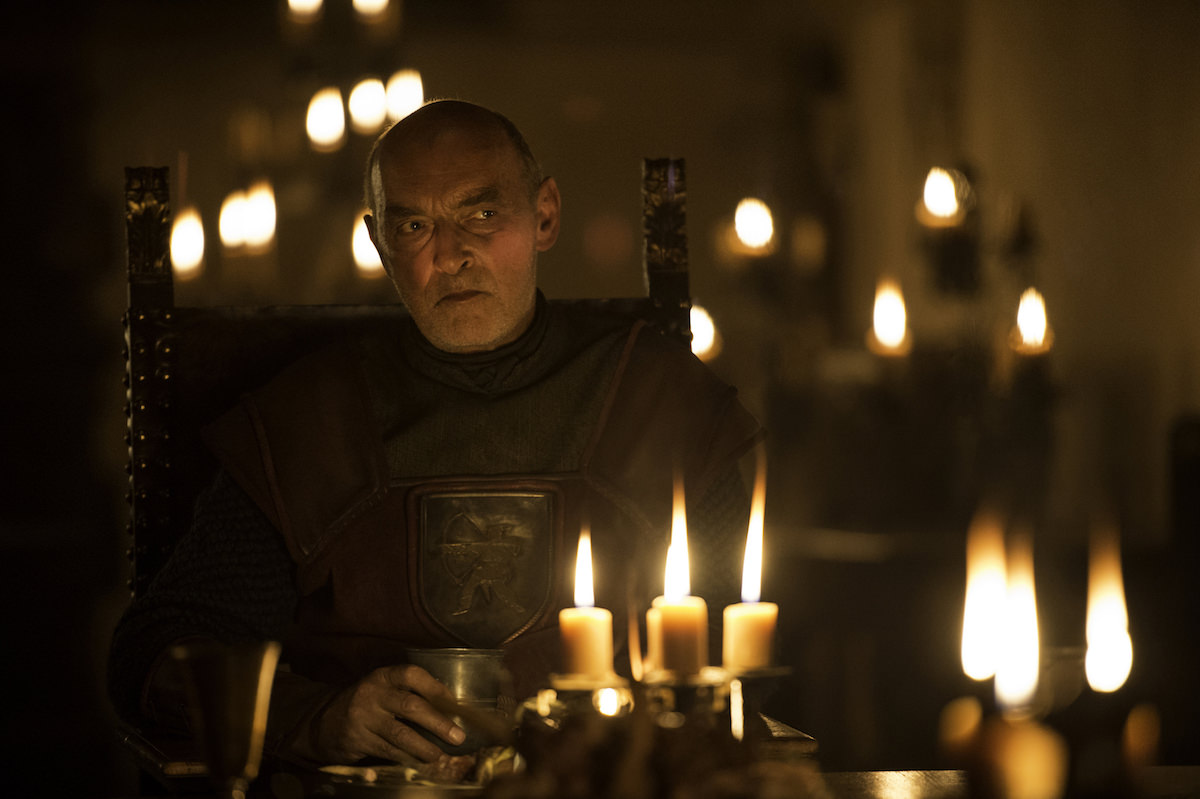 It was fairly predictable that the patriarch of the Tarly clan was going to be bad company, as Sam has told us a few times just how cold his father is. In this very episode, he properly warns Gilly as they near his home that his father threatened to kill him if he didn’t leave for Castle Black and give up his claim to his father's estate, despite being the rightful heir as the first born son. What was a little less predictable was that the humorless pater Tarly would take Gilly’s kind, brave words in defense of her Samwell and turn them around so brutally. As Randyll is ridiculing Sam's weight and lack of skill with a sword, Gilly's having none of it. She explains that he's braver than Randyll could ever hope to be, having killed a White Walker on their way down to Castle Black. Word choice, Gilly! Randyll catches on to the fact that Samwell and this strange girl were heading down to Castle Black, meaning they met north of the wall, meaning Gilly’s a wildling. And wouldn’t you know, Randyll hates wildlings, too.

Gilly is yet another GoT female with more pluck and bravery than we may have initially suspected. Her tireless defense of and belief in Sam is touching, and ultimately what makes Sam tap into that inner courage he has. It’s precisely Gilly’s refusal to see what others, especially his father, have seen in Sam all along that motivates our favorite future Maester to grab her, Little Sam and Randyll’s sword Heartsbane and steal away in the night. To complete the picture is the fact Gilly was wearing that absurd dress that made her look like Snow White.  As Sam lifts Heartsbane from it’s perch on the wall, Gilly nervously asks “Won’t he come for it?”

“He can bloody well try,” Sam says, and hearts across America did a little swoon. It was an episode filled with, weirdly, people doing the right thing. Sam not leaving Gilly and little Sam with his awful father while he went to complete his training as a maester was certainly the right thing to do, as was Arya’s decision to not poison Lady Crane. This was a nice little twist in a storyline that was becoming almost comically rote—Arya’s slow transformation into a Girl Who Has No Name required her to poison the actress, but she was unmoored by the strength of Lady Crane’s performance as the grieving Cersei, and further moved by how attentive the actress was to Arya when she found her backstage (shortly after she’d delivered the poison to Lady Crane’s after-show rum). Arya seems to come to the conclusion that her entire path of revenge is threatening to turn her into a monster not that much different from Joffrey, cavalierly killing people without a thought to who else will be effected by it.

So Arya slaps the poison out of Lady Crane’s hand (in a nice touch, when Lady Crane had asked Arya her name, she quickly said “Mercy,” which is what she would show the actress a few minutes later), which quickly paints a bulls-eye on her back. She retrieves her sword, Needle, and prepares for a confrontation with the Waif. 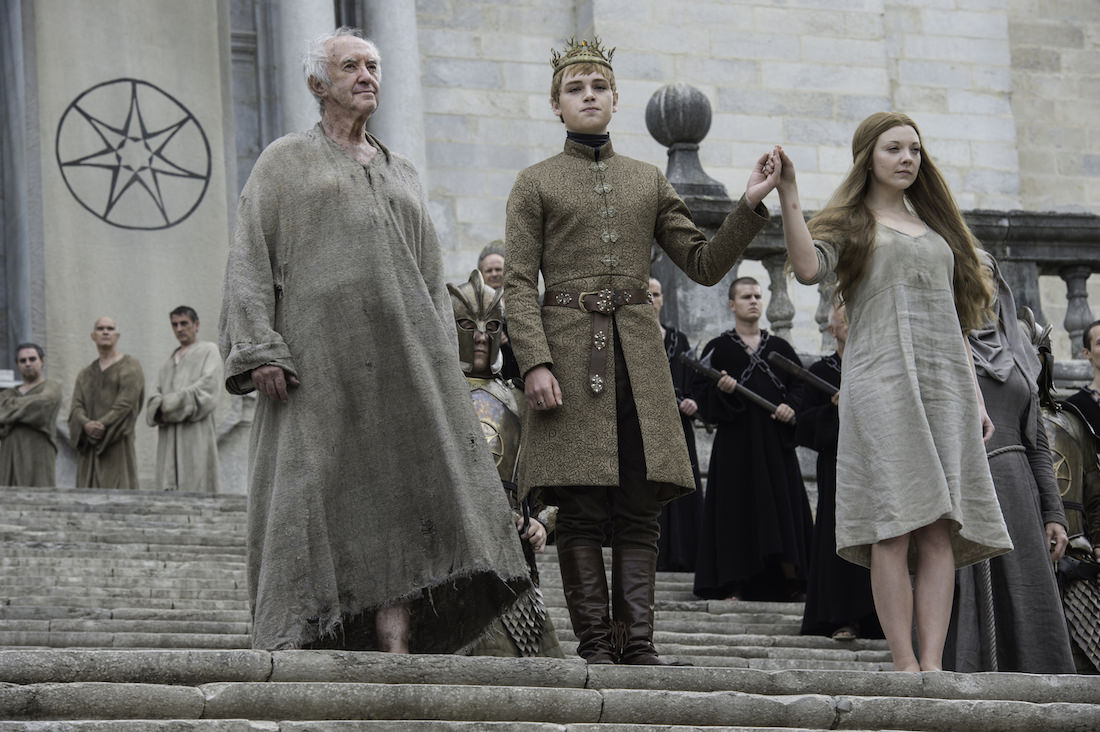 Speaking of characters making surprising choices, how about Margaery and Tommen? The High Sparrow might be the most cunning man in Westeros if he can convince both the queen and king that they need to align the crown with the faith, essentially securing himself the position of King’s Hand and, perhaps, king himself. Only the High Sparrow is smart enough to realize he doesn't need to convince them both, only Margaery, as Tommen would do whatever she asked, and so it is. The big showdown with Jamie Lannister and the Tyrells is completely de-fanged by the appearance of Tommen, who stands at the High Sparrow’s side and calls for a “new age of harmony, a holy alliance between the Crown and the Faith.” Now the Lannisters and Tyrells can’t assassinate the High Sparrow and destroy the Faith militant—they’ve got a king on their side.

It was a stunning coup for the High Sparrow, whose holiness is soaked in ambition and an unflinching self-regard, basically the ying to Cersei and Jamie’s selfish yang. It wasn’t for nothing that we go from Tommen and Margaery’s promise of sensible, faith-based rule to a scene in which Cersei promises Jamie they’ll get their revenge and then adds “we’re the only two people in the world.” The High Sparrow and Cersei Lannister are two poles on either end of the power mad spectrum, and each end of the pole is bad for just about everyone else but themselves.

The episode began where the last ended, with Meera pulling Bran as fast as she can away from the wights. Of course a single girl pulling a boy on a large wooden cart couldn’t outrun an undead army, so we figured someone would have to come to their rescue, and sure enough, someone certainly did. GoT speculators have long awaited the arrival of Coldhands, a mysterious figure in George R. R. Martin’s novels, and it was he who rode to the rescue, slaying a bunch o wights and carrying Meera and Bran to safety. And who is Coldhands? Benjen Stark, Bran’s uncle! Before Benjen arrived, however, Bran was having some major flashbacks of events that lead us to believe we might be preparing for the Stark/Lannister clash that has been the backbone of this entire show. He saw the Red Wedding (which was referenced a few times in this episode) and the mad king shouting “burn them all” moments before Jammie Lannister became the Kingslayer. These flashbacks are important, as the entire episode shifted key players into a confrontation that would pit these old enemies against one another for a final battle—at which point the White Walkers might arrive and kill them all. But think about it—Tommen ordered Jamie to take Riverrun from the Blackfish and give it back to Walder Frey, the man who orchestrated the Red Wedding. Only Riverrun is where Sansa and Jon Snow are planning on recruiting some allies for their battle against the Boltons. With Bran’s visions of some of the key events that started the hatred between the Starks and the Lannisters, it now seems that we’re looking at a potential fight in which the Lannisters and the Boltons team up against the Starks.

Anyway, let’s end where the episode ended—as if the Dothraki needed any more proof that their new leader is just a little bit different than their last, Dany appears on the back of her dragon, Drogo, and exhorts them to follow her into battle and conquer her enemies. Sort of hard to say no to someone riding a fire-breathing dragon. Bonus points for those of you who noticed the two tubes on either side of Drogo's tongue—those tubes might just carry the fate of the seven kingdoms in the form of purification by fire.

See you all next week!