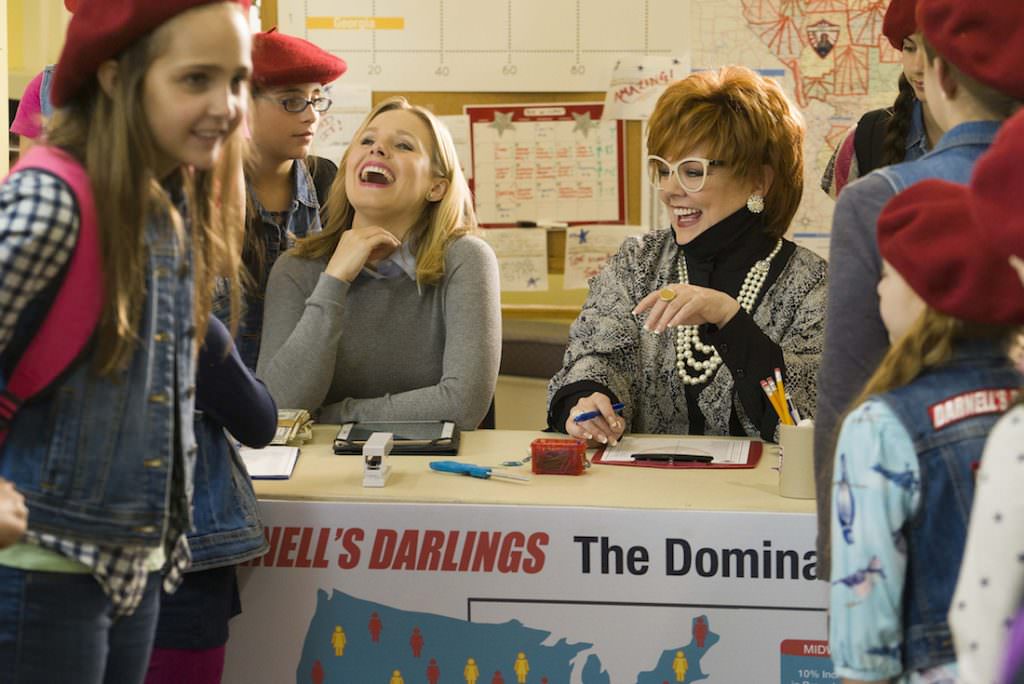 In The Boss Melissa McCarthy stars as Michelle Darnell, a megalomaniacal businesswoman who has to rebuild her life with the help of her long-suffering former assistant (Kristen Bell) after a stint in federal prison. We speak to director, co-writer, co-producer, and McCarthy’s husband Ben Falcone, about working with his wife again- he also directed and co-wrote the 2014 McCarthy vehicle Tammy– how they resolve problems and geeking out over Peter Dinklage.

I saw The Boss the other night and I really enjoyed it, particularly the violent children!

Now, I understand that the character Michelle Darnell was created when Melissa was doing improv with the Groundlings, and you were as well. How do you go about turning an improv character like that into a feature film? What are the signs that it might actually work?

Well, it's just a character she's always kind of had in her head. She hasn't left it or wanted to get rid of it. She kept talking about it and she and Steve Mallory, the other co-writer of the movie, had done an outline for it, and I'm like, ‘Let's go back to this outline.’ Anything that's on her mind that much, that she's that easily able to sink into that character; I thought it was just worth our time.

Melissa and Steve wrote the first incarnation of the script, and then you came in a little bit after that, is that right?

They wrote the first outline of it. Basically, the structure of the movie as it exists, where she's on top of the world and has a fall and has a for-profit brownie business, was the outline, and then we all wrote the script together.

In that dynamic, what do you think you bring to the writing team?

I don't know. If you find out, will you let me know?

You bring the coffee?

I bring coffee. I make sure everyone's snacks. I try to make sure everything feels real, and having gone through post before with Tammy, I’d point out if something felt extraneous. Then I'd just pitch jokes. Just like a normal part of the team.

Can you describe the creative partnership you have with Melissa? It's obviously quite special that you've created these great movies and are still, well, together. How do you think that works?

I think it works just because we make each other laugh, we love each other, and we respect each other. It's been a great partnership from the start, and we're hoping to keep it going as long as we possibly can.

Do you ever have disagreements about things, and how do you manage them?

Well, sometimes, like if one person thinks one thing will be good…I know really quickly if she likes an idea because she'll start expanding upon it really fast, and if she doesn't she'll go, ‘Oh, well …’ Then, rather than try to impart upon her how important it is that she follows my idea, I go, ‘Well, what's your idea?’ and maybe it's better. I think she has the same thing with me. If I don't immediately respond, we just always think there's a better third option, that it doesn't always have to be your thing. I think that's the way we deal with any…I wouldn't even really call them disagreements, it's more like …

Solving a problem together? 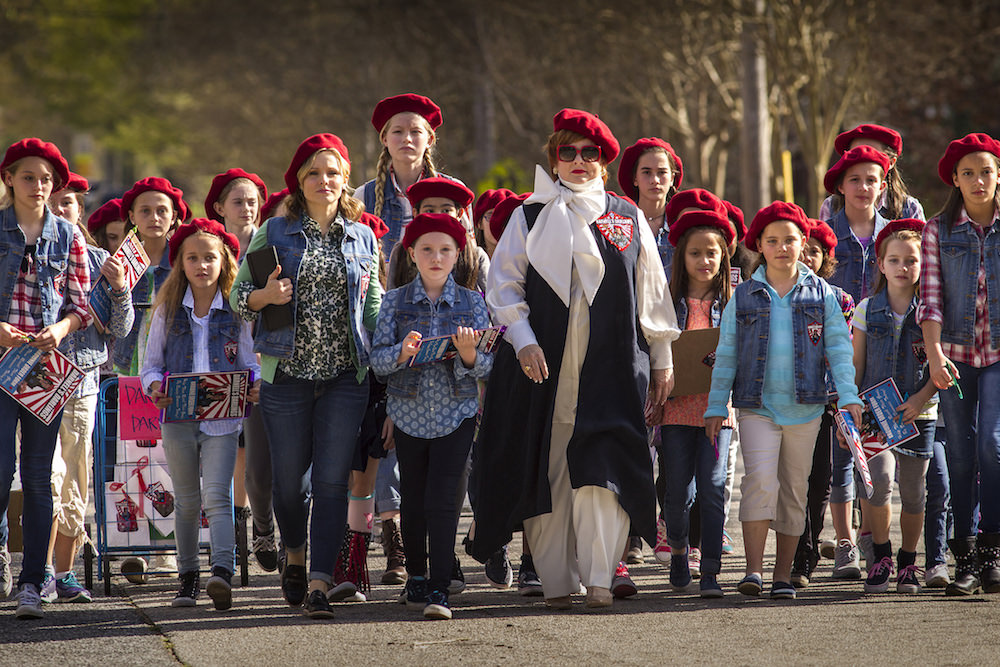 When you get on set and you're running an expensive production, is there a way that you have to have a different relationship in front of the whole crew and everyone?

You know, not really. She's so friendly and nice and she sets such a good tone on the set as an actor anyway, whether it's a movie I'm directing or not, that the way we are on set and the way we are off set is exactly the same. I don't really have to be like, ‘Okay, now we're about to do something. Everyone focus.’

With a cast like her, Kristen Bell, Peter Dinklage and Kathy Bates, you've got this group of professionals that are just so great. To me, the way that I direct is in that role of a facilitator. I know what I'd like to get, but then also sometimes I know that there are surprises and I can't possibly predict what they are. I want to put people in a position where they can both execute the script as written and moments as I'm imagining, and then also put them in a position where they feel comfortable to deliver me a delightful surprise, because those sometimes are the best parts of movies.

I understand that Peter Dinklage's character was actually written with him in mind?

Seeing him doing comedy is a bit different to what Game of Thrones fans, et cetera, would be used to, and he's very good. How did you get him to come onboard?

We said, ‘Hey, let's go to Peter Dinklage,’ and then someone said, ‘Okay, let's call him,’ and then he was somehow interested. We were like, "Oh, my gosh, I can't believe it!‘ Melissa and I are such dorks. We were like, ‘Oh, my gosh, we get to talk on the phone to Peter Dinklage,’ because we're huge fans of his work. Then we talked on the phone, and then, sure enough, he was very smart and very sweet and very funny. We were like, ‘Oh my God, this is incredible.’ Then the only thing was just figuring out the schedule, and he was able to do it. To me, that was just sort of a dreamy process. The fact that once in a while Pete will text me or something is still a delight. Well, he's just such a nice person. I try to stay in touch with him as much as possible. Sometimes I'm like, ‘Really? That dude is okay with me?’ Keep tricking him, that's my goal. I just want to keep tricking him.

Well, you know, you made a whole movie just so that you could be in a text relationship with him, so…

Exactly. I made this movie so I could text Peter Dinklage.

In terms of the character Michelle Darnell, what do you think it is about her that first of all is such a great anchor for comedy, but also has that element of heart to her as well?

I think Melissa's so good at bringing vulnerability and insecurity to characters, even when they're so brash. Because people will be like, ‘She's so mean, she's so brash,’ and I'm like, ‘Yeah, but underneath she's this kid who bounced around and had a really tough go of it and had to work her way up, worked for every single thing she ever got.’ That to me is the interesting dichotomy of the character, is that she's got all this swagger, but underneath she's this kid who never got the love that she needed. When she finally becomes an adult and figures it out, she figures out a way to still be the fun person that she is, and to have the crazy fun times that she has, but also to care more about people. It's a story about families.

In this movie, like in Tammy, Melissa plays a really brash, flawed and unapologetic woman, and, in this movie particularly, it's such a great ensemble of women who are taking center stage. Is that something that you're conscious of when you're writing it, or is it just all about finding a funny scenario?

To me it's about telling the right story, and in this story, when Melissa and Steve outlined it a long time ago, the basics of it anyway, it was: there's Melissa, she falls from power, she's moves in with her assistant who's a woman who has a daughter who's a girl, and then they start a for-profit version of a brownie company with kids selling it, who are all girls. It was never like, ‘Oh, let's make sure these are girls.’ It was just: that was what the story was. There's also men in this movie. They're great.

I do like doing movies where women are at the center because I think it is under-seen in our world, but it just so happens that I'm married to this really funny woman who's the lead in movies I've done. I guess you could say I'm proud of the fact that we're doing it, but I'm not intending it. It's just how the story falls.

We just finished a pilot called Nobodies for TV Land for a TV show that we're really excited about. We're in the early stages on a new movie that I'm not sure I can talk about yet, but we're super excited about. Hopefully another movie where Melissa would be the star and produce it and I would direct it.