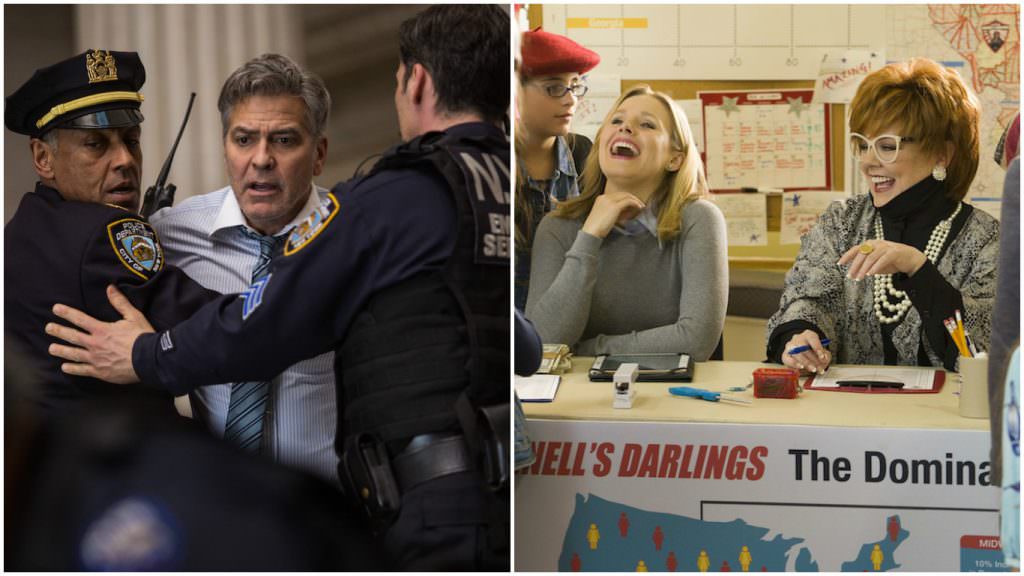 Hollywood has picked up on the fall of the Wall Stret suit in a big way. In December, it was The Big Short, a succinct, realistic re-telling of 2008’s subprime mortgage crisis that led to global recession. Today, it’s The Boss, in which Melissa McCarthy plays a former mogul busted for insider trading. And in early May comes Money Monster, in which the fallout from a television personality finance wizard’s bad stock tip comes back to him, big time.

Whether a set-up for slapstick or a snappy but faithful re-telling, the crashing and burning of finance types is having a moment on the big screen, even if, as we all know, that’s not how it turned out in real life, unfortunately — we kid, we kid! please don’t punish our meager Roth IRAs. What’s going on? Is Hollywood subliminally stumping for Bernie Sanders? And can there ever be redemption for the moneyed fallen? Depends on the film — but you’ve got your pick. Assuming you’ve all watched The Big Short several times over, just like us, let’s compare the newcomers in the several curious ways in which they converge.

George Clooney stars in Money Monster as Lee Gates, a television personality-cum-finance wizard who’s like a less hyperactive, better-looking version of Jim Cramer, from CNBC’s Mad Money. Melissa McCarthy invented the character of Michelle Darnell, an arrogant mogul type who is, of course, beyond rich, while doing improv. Like Gates, Darnell has parlayed part of her career into selling her own success, leading motivational seminars on how to get rich Just Like Her (and however inadvertently, this publicity is what sets up both Gates and Darnell for their downfalls).

Having been caught insider trading, Darnell is brought down for her own illicit enrichment, and spends some months in minimum-security prison, Martha Stewart-style. Gates gave a bad stock tip, as it turns out, and a former acolyte who lost it all on the tip shows up to Gates’ live show to wreak havoc, expose a corrupt system, and do it by taking Gates hostage.

Between Darnell’s prison sentence and ensuing poverty, and Gates’ sudden turn as a kidnapping victim, having been taken down, how are these two going to reverse their fortunes? Not without help! It’s fine-boned female assistance to the rescue, in both cases. Darnell moves in with her heart-of-gold former assistant, Claire (Kristen Bell) and her sweet daughter Rachel (Ella Anderson). Claire’s patience and Rachel’s extracurriculars provide a path to a new life for obnoxious, useless Darnell. Gates, meanwhile, having being taken captive and dressed in an explosives vest, is guided through his unfortunate predicament by his patient, cool-headed producer, Patty Fenn (Julia Roberts).

Darnell goes all in on Claire’s daughter’s Dandelion troop, a Girl Scouts-esque organization that requires uniforms, which in this case entails jaunty little red berets worn more Che Guevara-style than Red Robin-style. Gates’s signature accessory is, unfortunately for him, a vest of explosives over which he does not have control of the detonator.

Darnell and Gates don’t get out of their difficult predicaments (poverty and potentially being an unwilling suicide bomber, respectively) by figuring out how to make money or escape. Well, they do, but the path that gets each of them there is Learning the Most Important Lesson of a Person’s Life: both finding an appreciation for, and an ability to create, significant human connection. And in discovering their own humanity (and finally recognizing others’) these two terrible tycoons manage to save themselves — and be far more similar than viewers might ever have thought.