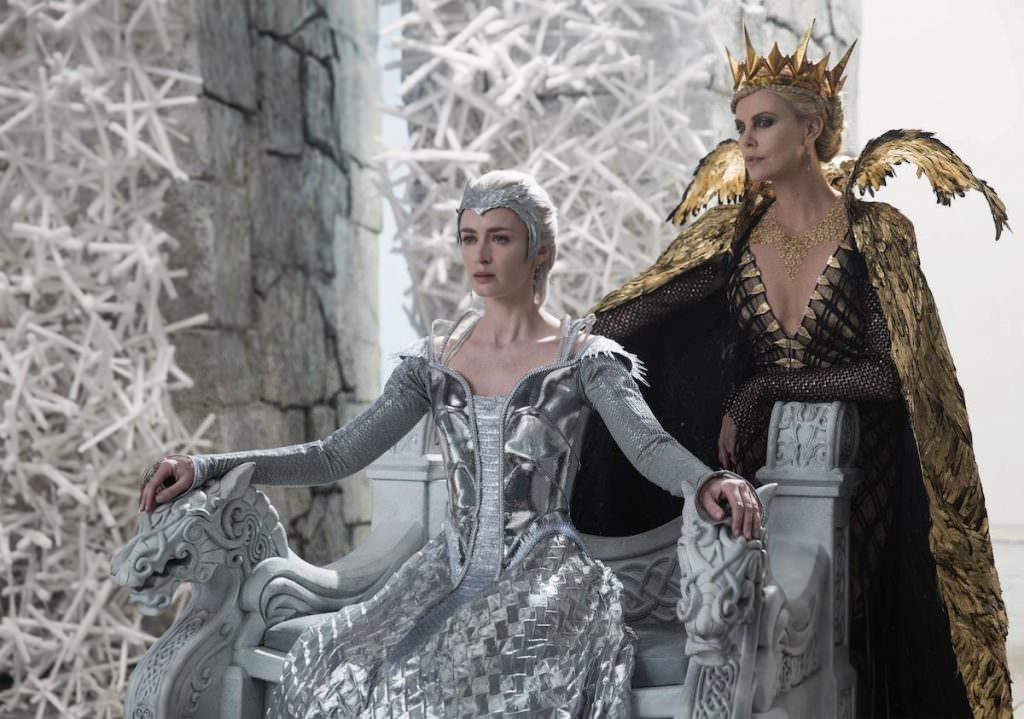 The Huntsman: Winter’s War and the Tradition of Fairy Tale Film

Though the classic fairy tales of the Grimm brothers and Hans Christian Andersen were penned hundreds of years ago, their fantastical sensibilities and moral allegories are still the stuff of fascination, and remain deeply entrenched in our culture even today. With today's release of The Huntsman: Winter’s War, we will yet again be treated to a fantasy vision of well-known fairy tale characters like Queen Ravenna from Snow White (Charlize Theron) and Freya, The Snow Queen (Emily Blunt). But like Snow White and the Huntsman that came before it, Huntsman: Winter’s War is a decidedly mature and updated take on stories perhaps known best for their animated Disney iterations.

As time has gone on, and as the well-worn stories have been cemented into the collective zeitgeist, we’ve necessitated new, interesting looks at the traditional stories. The Huntsman: Winter’s War promises to be one of these: a dark, violent and sexy update on the children’s classic. But riffs on classic fairy tales have existed for nearly as long as the traditional ones have, with Jacques Demy’s daring Donkey Skin arriving on screen nearly 50 years ago. Since then, we’ve seen cutting edge and live action takes on the classic fairy tale, including Hansel and Gretel in the form of M. Night Shyamalan’s The Visit as well as the romantic fairy floss take on The Little Mermaid in the form of Ron Howard’s Splash. In honor of Huntsman’s release, we’ve collected a few of our favorite live-action fairy tale riffs, from the relatively faithful to the totally out there.

Made only 11 years after Disney’s Snow White, this gorgeously wrought Powell & Pressburger take on Hans Christian Anderson’s fairy tale of the same name. Employing the narrative technique of a story within a story, The Red Shoes centers on a young ballerina tasked with playing the protagonist in the ballet The Red Shoes, which follows the plot of Anderson’s story. In the story, a young woman is gifted a pair of red shoes from a demonic shoemaker. Initially pleased, the young woman soon finds that the shoes will not permit her to stop her dancing as she dances to her death. Similarly, the film follows a viciously intense love triangle that ultimately results in the young ballerina’s tragic death. The dance sequences, though, are nothing short of stunning, making full use of the physicality of the live action format. In the years since the release, the film has become a high water mark of art films everywhere, giving way to another Andersen-inspired ballet drama, Darren Aronofsky’s Black Swan.

Beauty and the Beast

Though some might consider Disney’s Beauty and the Beast the definitive adaptation of the Grimm classic, Jean Cocteau's’ meticulous and sumptuous black and white retelling is one not to be missed. Rife with visual metaphors and stunning cinematography, the film is presented in French, but is so rich in its visual storytelling that dialogue is kept to a minimum, allowing much of the emotions of the movie to be communicated in tender acting and gorgeous pantomime. Giving a heartrending portrait of the beast without shortchanging the beauty, Cocteau’s contribution to the cinematic tradition of the fairy tale will certainly remain a staple of classic cinema for as long as the story it tells.

Though Jacques Demy’s Catherine Deneuve-starring musical fantasy was not inspired by Grimm or Andersen but instead the French author Perrault, the original story Donkeyskin follows a Cinderella-like rags to riches story, revolving around a young woman sought after by a prince whose identity is only revealed once it is discovered her fingers fit the prince’s ring. Even 37 years after the film’s release, Donkey Skin remains one of Demy’s most important examples of his work, with a fantastic musical score and a bombastically colorful approach to cinematography bearing references to Cocteau’s Beauty and the Beast before it.

Showtime’s Faerie Tale Theatre, which ran for 5 years in the mid-’80s, was a serialized approach to some of the most beloved fairy tales ever written, from Sleeping Beauty to The Little Mermaid. Though technically a television program, the series always had impressive cast and crew choices, boasting credits from visionary directors like Francis Ford Coppola and Tim Burton along with surprisingly modern casting choices like Mick Jagger and Jeff Goldblum. Faerie Tale Theatre is probably best remembered for Shelley Duvall’s lilting introductions and her waifish dreamlike charm that extended to the look of the show, which often teetered between unsettlingly strange and admirably crafty.

Loosely based on The Little Mermaid, Splash was home to a star-making performance for Tom Hanks, in a love-lorn role opposite the disarmingly beautiful Daryl Hannah. Following the well-known love story between man and mermaid, Splash is surprisingly adherent to certain quirks of Andersen’s original story, preserving the mermaid’s initial inability to speak. But instead of fulfilling the fairy tale’s horribly tragic ending, Splash provides a classic romantic ending, culminating in an underwater kiss that even then seemed destined for the history books.

As we jump ahead to the new millennium, we find a largely overlooked but nonetheless blissful take on the tradition of the Snow White tale, this time set in Andalusia in the 1920s, shot in the silent film format. The film is Blancanieves, a fairy tale retelling that found inspiration in the tradition of silent French cinema, Hitchcock and Bunuel. Sadly overlooked due to an unfortunate overlap with the wildly successful The Artist despite the director, Pablo Berger, being unaware of Hazanavicius’ silent venture until well into production, Blancanieves is a worthwhile and boundary-pushing adaptation of the familiar classic.

In a surprising return to favor, M. Night Shyamalan’s most recent found footage horror film found its terrifying roots in Hansel & Gretel, centering around two siblings’ visit to their grandparents’ home. Though The Visit diverges wildly from the classic Grimm tale in the third act, Shyamalan’s visual markets are clear, particularly in one incredibly harrowing scene involving an oversized oven. A fairy tale retelling as modern as it is interesting, The Visit is the first Hansel & Gretel retelling in quite some time to come close to the terror of the original story.